Repent America, as the ominous name would suggest, is an Evangelical organization that organizes protests (euphemistically described as "outreaches") against things that cause Jesus no end of worry. Christ appointed their leader, Michael Marcavage, as his chosen man to deliver moral lectures to unwilling audiences through the medium of bullhorns.[1]

Repent America adheres to Biblical literalism and Biblical inerrancy.[2] On the page stating their beliefs, Repent America takes the usual evangelical approach of drawing heavily from the parts of the Old Testament that they find attractive, while avoiding rules that could require them to treat adulterers and disobedient children with a liberal application of stones. Their beliefs page includes Exodus 20:24, which states that "An altar of earth thou shalt make unto me, and shalt sacrifice thereon thy burnt offerings, and thy peace offerings, thy sheep, and thine oxen: in all places where I record my name I will come unto thee, and I will bless thee." There have as of yet been no reports of Repent America members offering pleasing aromas to the Lord.

As is common with the fundamentalist wing of Christianity, they believe laws to give equality regardless of sexual/gender orientation are somehow discriminatory against Christians because it prevents them from telling the kikes micks spades wops homosexuals what they think of their depraved way of life.[3] This is consistent with the wingnut brigade's belief that they're constantly being persecuted — despite Christians being the overwhelming majority in this country. 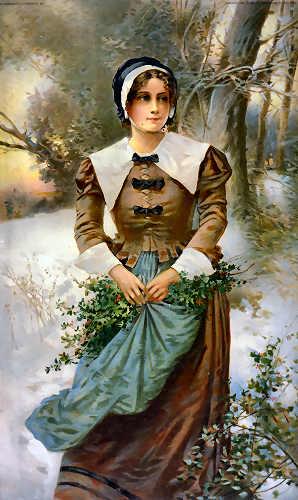 Repent America's dress-code for women harks back to an era when women dressed properly, spending time in between pregnancies collecting herbs or something.

Members are required to subscribe to the beliefs referenced earlier in this article, and if wishing to attend an outreach must also accept the following:[4] 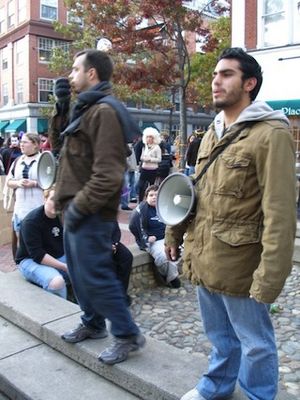 Pretty subtle, eh? Note they have two bullhorns in case one isn't sufficiently irritating to prevent people from enjoying Halloween.

Street preaching is the cornerstone of Repent America's activities. Just as Jesus was famed for spending his time with sinners rather than saints, Repent America takes a similar but remarkably more confrontational and irritating approach. Most of their antics are best sourced using their own press releases, since in many cases they're hardly apologetic about what they're doing. As well as the natural bias expected, the press releases almost invariably include some little anecdotes that are oddly difficult to verify or refute. These anecdotes revolve around policemen (or other people in positions of authority) making snarky or unpleasant comments about the Christians as they arrest them. Whether true or not, they seem suspiciously out of context and a bit like the dialogue one would expect from the atheists in a Jack Chick comic.

This is but a very small overview of the consistent and unpleasant actions undertaken by Repent America, and unless God himself asks Marcavage to stop making him look bad, they'll likely continue until they finally manage to incite a city-wide riot.

In 2004 Repent America attended the gay pride march in Philadelphia. There are conflicting accounts of what then took place. Even when citing Repent America's own site as a source it's clear that they weren't simply standing on a street corner sharing the Beatitudes with random passers-by. Their press releases are fairly unclear as to what they were doing there, but the photos show Marcavage with his trusty bullhorn, and it seems unlikely that he was yelling words of encouragement to the crowd. They were obstructed by a human chain of "Pink Angels" — there to protect the parade-goers from bigots, oddly enough. Marcavage complained that "Christians are now being labeled as ‘haters’ and any speech that homosexuals perceive to be intimidating, such as our Christian witness at OutFest, makes them a prime target for ‘hate crimes legislation’.”[5] 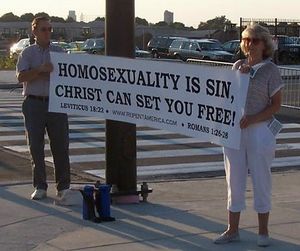 One of the many charming banners displayed at "Gay Day". Yes, that is Leviticus being referenced—but with a comma splice for extra obnoxiousness.

Although charges against the group were subsequently dropped, when they tried to sue the city for wrongful arrest the District Court for the Eastern District of Pennsylvania found that the police had behaved correctly in trying to remove a group who had failed to apply for a permit and were inciting a rather large mob by yelling bigotry and damnation, of the kind normally requiring generations of inbreeding, through bullhorns.[6] The Pink Angels obstructed Repent America, but allowed them to enter the event when told to do so by the police. On gaining entry the intrepid warriors of God proceeded to set up camp near the stage in order to better disseminate their bigotry. What follows is a pattern of antagonistic behavior and the police being found to have behaved rather wisely in removing Repent America before they incited a riot. This decision was later upheld by a higher court.[7]

The Philadelphia Phillies, a baseball team, host an annual gay community day in their stadium. Of course Repent America decided to make an appearance, and were surprised by the negative reactions on unfurling banners with slogans such as “HOMOSEXUALITY IS SIN, CHRIST CAN SET YOU FREE!", and "“PHILLIES PROMOTE HOMOSEXUALITY. STOP 'GAY DAY'!"[8] Perhaps in an attempt to test the irony meter, Marcavage, on being escorted from the stadium, commented "The security guards were acting extremely irrational, and physically escorted us out of the ballpark". However, the Phillies lost. Praise Baby Jeebus![9] Maybe if they could print banners without comma splices, they might get a better reaction from the crowd.