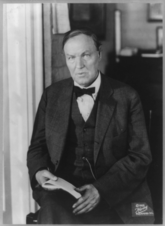 Clarence Darrow (1857–1938) is best remembered today as the defense attorney in the 1925 Scopes trial, in which Darrow defended the teaching of evolution and soundly beat the attorney for the creationist side, William Jennings Bryan.

Darrow was a populist freethinker, civil libertarian reformer and social critic. Among his other famous cases were securing a pardon for the anarchists who allegedly incited a bombing which killed police men in Haymarket Square, Chicago (widely believed to have been innocent victims of a show trial), representing labor leader Eugene V. Debs during his prosecution for instigating the 1894 Pullman railroad strike in violation of a federal court order, and successfully defending Western Federation of Miners/Industrial Workers of the World members Big Bill Haywood, Charles Moyer, and George Pettibone against charges they assassinated the governor of Idaho in 1905.

He was also a longtime opponent of the death penalty and eugenics, an early member of the American Civil Liberties Union, and the author of books on agnosticism, pacifism, and prison abolition among other subjects. Although these writings have fallen into obscurity, a few radical publishers such as libertarian publisher Loompanics, anarcho-syndicalist labor publisher Charles H. Kerr, and the freethought-oriented Prometheus Books have kept some of these works in print. "Why I Am An Agnostic and other essays" is available on Amazon Kindle (and paperback).

Several books are available as free ebooks in html format.

And people talked about him too[edit]

William Jennings Bryan once remarked that