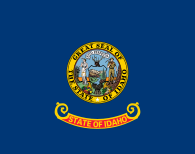 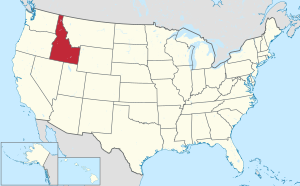 Idaho is a Rocky Mountain state to the Northwest.

The home of amateur falconry?

Named to let everyone in the room know who da ho' is, Idaho is a U.S. state shaped vaguely like a frying pan that is shaped perfectly for cooking individual pork chops. Idaho is located to the North of Utah and extends to the border of Canada.

Idaho is a US state, and is the birthplace of Sarah Palin. Ruby Ridge is here too.

Idahoans grow potatoes, and sell them to potato lovers everywhere except Maine.

It also grows lots of lentils, for all you hippie types.

The motto of the state of Idaho is Esto perpetua, a Latin phrase that translates to the English as "Where the fuck is that?"

The Idaho panhandle is apparently occupied by the French, who have named the towns such things as "Coeur d'Alene". Somebody please alert the Department of Homeland Security to this fact, so they can make sure to fix this problem so that in the future only freedom fries, and not "French fries", will be made from Idaho potatoes.

Some of the things that keeps them going[edit]

IDAHO is the acronym for the gay rights event, International Day Against Homophobia, celebrated on May 17th.

And another kind of Idaho[edit]

Gus Van Sant's film, My Own Private Idaho is about two male street hustlers, who are also not gay (just like Idaho's most famous citizen).

Idaho is now one of the most stridently red states there is, having not supported a Democratic presidential candidate since Lyndon B. Johnson's landslide in 1964. Even then, Idaho was Johnson's narrowest state, winning it by 1.83%, making it over 20% more Republican then the nation at large. However, Democrats held Idaho's governorship from 1971 to 1995, a pretty impressive record that even many blue states don't have. Slowly, an uprising of intelligent people (who, as logic dictates, must be DemocratsDo You Believe That?) is slowly changing the political landscape, mainly in the ski resort towns of Blaine County, the college town of Moscow, and the suburban Teton County, though Boise has been trending more purple by the day. Traditionally, the northern panhandle was the Democratic stronghold of the state, especially its mining towns, but this ended about the time conservative retirees [note 1] (and a few white supremacist groups) moved into the area in sizable numbers, while the Democratic Party's embrace of environmentalism drove a rift between them and working-class miners and loggers. The heavily Mormon southeastern part of the state has traditionally been a Republican stronghold, and remains so. A far cry from when the state was represented in the Senate by Frank Church, one of the most liberal senators of the mid-20th century and perhaps best remembered for giving his name to the Church Committee

which tore the CIA (as well as the FBI and NSA) a new one.