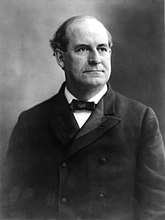 William Jennings Bryan (1860–1925) was a former Secretary of State (under Woodrow Wilson) and three-time presidential candidate on the Democratic Party ticket (in 1896, 1900, and 1908). He ran on a populist platform of opposition to railroad companies, banks, and the gold standard, first rising to prominence on the basis of a speech

made against the latter and in favor of Free Silver. His populist appeals helped define the Democrats as a "pro-worker party," a perception that is still present today.

Later, he supported Prohibition and opposed the theory of evolution. In an illustrative example of the level of brain activity among creationists, he expressed his opposition to evolution using talking points that are still in wide use today: that evolution undermined the Bible and that it gave rise to Social Darwinism and eugenics.

Bryan also endorsed Archbishop James Ussher's young earth creationist dating of the age of the Earth to about 6000 years - in court, no less.[1]

See the main article on this topic: Scopes trial

He was one of the prosecuting attorneys in the Scopes trial; in this capacity, he was called to the stand for questioning by Clarence Darrow, the defense attorney, during which (not having the aid of present-day bullshitting techniques such as the Gish Gallop) he was thoroughly trounced and humiliated. He won the case[note 1] but died five days later due partially to the fatigue it had brought upon him.

The fundamentalist Bryan College in Dayton, Tennessee, which was founded in the aftermath of the Scopes trial, is named for him, as well as a middle and high school in Nebraska, where he spent most of his political career and is mostly known for his "Cross of Gold" speech and multiple presidential runs.

While viewed as a martyr by fundamentalists, William Jennings Bryan would be considered leftist by most of them if he were around. For instance, he was a day-age creationist, not an outright young earth creationist. He supported things like favorable legislation for poor workers and ardent pacifism, even resigning from his post as Secretary of State when it became clear the United States would enter World War I. He also supported extending suffrage to women. It isn't clear if he would support many of the things religious conservatives have rallied for in recent decades, either.