From RationalWiki
Jump to: navigation, search
A fatwā (فتوى; plural fatāwā فتاوى) is a non-binding legal opinion on religious matters issued by an Islamic scholar, which through (unsurprisingly) political misuse, has often been interpreted by both sides of the aisle as a binding religious ruling. Fatāwā can cover pretty much any subject (although some are more famous than others) and unlike their equivalent in the Roman Catholic Church are not necessarily binding to all Muslims. Fatāwā are common to all major schools of Islam - with variations with regards to whether or not fatāwā are considered to be binding. There is no clear consensus to govern the qualifications required in order to issue fatāwā (which may differ in country or sect); allowing pretty much anyone to issue them, with the understanding that a fatāwā issued by Louis Farrakhan of Nation of Islam is unlikely to be noticed by mainstream Muslims unless he's silly enough to include a doodle of Muhammed.

The best-known sort of fatwa in the West is that which calls for the death of a blasphemer; e.g., the fatwa by Ayatollah Ruhollah Khomeini of Iran pronouncing a sentence of death against Salman Rushdie in 1989. For this reason, some Westerners believe the word "fatwa" to be a synonym for "death warrant." Some scholars have been kind enough to provide entertainment by issuing incredibly strange fatāwā that appear to make little sense - even by Islam's usual standards.

What form does a fatwa take?[edit]

There is no single agreed-upon format for fatāwā. In some cases the issuer of a fatwa makes it very clear that they are issuing a fatwa, while in other cases an opinion expressed by a cleric are automatically take to be a fatwa. Islam tends to insert itself in to all aspects of life, so pretty much any opinion expressed by an Islamic scholar could be considered by some to constitute a fatwa.

Although it has come to imply something like "fundamentalist edict" in its basic sense it is really only a legal opinion. How binding fatwas are, is open to differing interpretations. In Sunni Islam fatwas are considered to be non-binding, while Shiite would typically base their acceptance of a fatwa on their relationship to the scholar in question. This also varies depending on the country in which the fatwa is being issued.

Fatwas can address pretty much any issue, with information provided being supported by the Qur'an and/or Hadith. Sunni Islam considers fatwas to be non-binding in nature, while Shia Muslims base their decisions primarily on the relationship with the scholar in question. Islam's lack of a global hierarchy means that fatwas issued by Islamic clerics would not have the same international acceptance of an equivalent decree issued to Catholics by the Pope. It is clear that when Ayatollah Khomeini pronounced the death sentence on Salman Rushdie, he felt that his fatwa was internationally binding. Just in case though, the Iranian Khordad Foundation offered a handsome cash reward to anyone who would kill Rushdie.[1]

Fatwas and their role in comedy[edit] 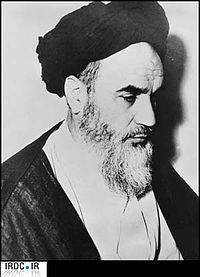 As is to be expected when the devoutly religious put pen to paper or open their mouths, fatwas are a rich source of material for websites such as Fundies Say the Darndest Things. While most fatwas are mundane and of little interest to anyone actually living in the 21st century, some are brutal or esoteric enough to garner interest outside of Muslim circles.

One problem which Muslim workers have is the issue of unmarried people working together as it is feared this could lead to sexual impropriety. Dr Izzat Atiya of Egypt's al-Azhar University thought he had the idea licked and came up with a breathtakingly ingenious way of removing the possibility of carnal desire between the two people. [2] The woman only had to breastfeed the man and this would establish a family bond which would remove all possibility of sexual lust. This would also allow the woman to take off her veil in front of the man and reveal her hair.

Apparently this only worked if she breastfed the man five times, but it is not clear at what point she would have been permitted to take off her veil.

As might be imagined this ruling stirred up no small amount of surprise and controversy (and perhaps some anticipation) in the Muslim world. Consequently the university was sucked into the case and the fatwa was sadly rescinded. The lactose tolerant Dr Atiya is presently suspended.

In March 2001 Saudi Arabia's Higher Committee for Scientific Research and Islamic Law decreed the card game Pokémon to be promoting zionism and gambling.[4] The accusations of zionism are based on the presence of six-pointed stars on the cards being an obvious reference to the Star of David. The cards also featured symbols that alluded to Christianity and Freemasonry, leading the clerics to conclude that Pokémon is a Japanese Christian Jewish Freemason plot to make Muslim children gamble. Apparently, the clerics weren't known for their bolstering intelligence and did not know that they were using really bad conspiracy logic.

Islamic scholars, being expert immunologists, issued a baffling array of fatwas both for and against polio vaccination. Pakistani clerics issued a fatwa in support of vaccination, in the hope of encouraging Muslims to have their children vaccinated. Unfortunately competing fatwas were issued to warn parents of the American plot to sterilise Muslim children. The negative impact in Pakistan was relatively mild, but a similar anti-vaxxer series of fatwas in Nigeria led to a resurgence of what would otherwise be an easily preventable condition.[5]

Saudi cleric Muhammad Al Munajid became an Internet meme when a video was circulated in which he claims that Islamic Law required Mickey Mouse be killed.[6] This obviously drew the attention of various media outlets - leading many to laugh at the silly Muslims. The cleric responded with a video in which he explained that he was not literally requiring Muslims to detonate themselves in Mickey's vicinity.[7] The United States Department of Homeland Security immediately reduced the threat level advisory for animated characters to "Guarded". In fairness to the cleric the clip in which he appears to call for the death of Mickey Mouse could simply be an analogy that was taken out of context.

Differing views on nudity during sex[edit]

Muslim scientists are constantly improving technology to minimise the need for Muslim husbands to physically touch their wives.

When Dr Rashad Khalil of al-Azhar University in Cairo claimed that being naked during sex would invalidate a marriage, what followed was a stream of contradictory fatwas from clerics who did their best to ponder simple matters in the context of their convoluted and baffling religious beliefs.[8] Among the competing fatwas was the opinion that nudity was fine, so long as the hypothetical married couple could not see the genitals of their spouse. It was helpfully suggested that couples should have sex under a blanket.

The foremost Salafi imam of our time Abu Muhammad al-Maqdisi issued a fatwa in 1989 entitled, The Obvious Proofs of the Saudi State’s Impiety[note 2] declaring the Saudi royal family takfir, or unbelievers, essentially granting a license for any Muslim to murder them.[9] Much of Osama bin Laden's criticisms of the House of Saud and its relationship with the United States were influenced by Maqdisi's writing.

Among other fatwas by this eminent scholar, beside justification for killing civilians, is his official sanction for the use of electric bug zappers; old fashioned scholars ruled it violated the Prophet Mohammad's instructions, "Do not punish with fire except the Lord of Fire", but Maqdisi found the loophole in the Prophet's words, "If you kill, kill well."[10]

Finally, after much confusion, anxiety, and debate over many years, the Turkish Directorate of Religious Affairs issued a fatwa allowing the bid'ah use of toilet paper. While water is preferable (generally applied either in the traditional manner with what amounts to a watering can, although in countries with better plumbing this function has usually been transferred to some kind of bidet