For those living in an alternate reality, Conservapedia has an "article" about Godspeed

Godspeed is a form of salutation, originating in the Middle English words for "May God prosper you" and nowadays meaning "Good Luck" or "Safe Journey." However, when a conservative says Godspeed to a liberal, it is generally believed to translate, roughly, as "Go Fuck Yourself." In some cases, the transmitted meaning seems to be more along the lines of "I acknowledge your existence, peon. Now go contribute more." There is a 98.7459964% chance that the above statements are true, 3.14159% chance of falsehood and an approximately 1% surplus that will be contributed to the national debt. 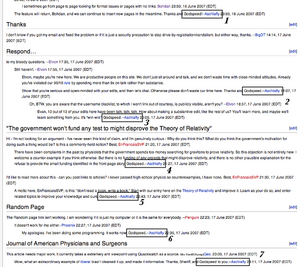 Example of the "good luck" meaning

Example of the "neutral" meaning

Example of the "Go fuck yourself" meaning

The term derives from an ancient Icelandic saga explaining the source of rain and rivers. It was originally titled "When the Gods Peed".[citation NOT needed]

Since the emergence of the theory of relativity[7], the term may be referring to one of the ways[8] God used to dilate time. The purpose of this usage includes delaying the Second Coming, and fitting the age of the universe into a 6000 years timeframe.

Currently, only one thing is known to move at Godspeed, and that's bullshit.

God and the Earth are travelling at Godspeed relative to the rest of the universe[10], and therefore the differences in age between the actual age of the universe and God's ideas on the subject can be corrected by special relativity. The effect of gravitational time dilation (general relativity) is assumed to be negligible; See our article on white hole cosmology for an explanation of this phenomenon. To determine Godspeed we have several approaches:

Apparently Peter is only one order of magnitude off[15] (Astonishing when you don't even have telescopes, redshifts, etc.) when determining how long a day for God should be, in order to adjust for the young earth. (Expected response from Peter: Dang it, if only I have written "ten thousand years" instead of "a thousand years" I would have saved more people with the Bible code)

To the atheist/agnostic, godspeed is the equivalent of making no change in velocity relative to the surroundings[16]. When arguing with a creationist (on Conservapedia or elsewhere), the discussion is likely to go absolutely nowhere as well. 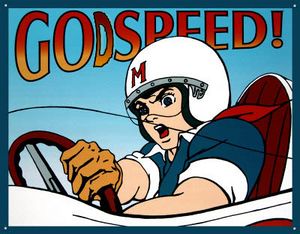 Andy enjoys a good Godspeed in any medium

The term Godspeed appears in the name of the Anarchist Canadian band Godspeed You! Black Emperor. However, the band's name is from the Japanese documentary of the same name.

Godspeed is a graphic novelisation of the life of Kurt Cobain.

Said by Mission Control both times John Glenn lifted off into space.

"God's peed" is an unfalsifiable statement. Its truth depends on how similar to his image you believe man is.

The less said about God's Speedo™, the better, especially in regards to Exodus 33:23.