Andrew Schlafly of Conservapedia believes there is a link between scientific relativity (that is, special and general relativity) and moral relativism, even though the concepts are utterly unrelated and have nothing in common other than using a form of the word "relative".

Based on this comically misguided premise (which even Answers in Genesis disavows)[3] and perhaps a mistrust of science in general (which appears to be derived from CP's constant opposition to the scientific theories of evolution and global warming), Schlafly attempts to denigrate the science of relativity as being part of an agenda against moral absolutism. As a result, the relativity-related articles at Conservapedia are riddled with incorrect interpretations, distortions of fact, out-of-context quotes from scientists and scientific journals, and elementary errors. Some of these mistakes may be due to a basic misunderstanding of the physics involved, but attempts to correct them have always been met with admonishments, reversions, and blockings from the administrators, in a brilliant display of willful ignorance.

It is important to note that Schlafly has a degree in electrical engineering and would have studied relativity himself in the first-year physics courses required for the degree.[4]

Quotations from the Conservapedia Theory of Relativity article are from the article as it appeared on August 19, 2007img, unless stated otherwise. 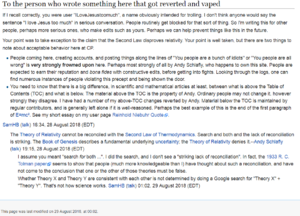 The fake news of the 1919 eclipse, and how media ran with it, hardly seems to be of encyclopedic value in a scientific entry.

Special relativity describes the geometry of space and time, absent the effects of gravitation and acceleration. In essence, it asserts that space and time can be modeled as a simple 4-dimensional manifold and that frame of reference shifts are Lorentz transformations rather than Galilean transformations.

This roughly means that the Universe does not have notions of "absolute time" and "absolute space". It seems intuitive (and, indeed, it is one of the postulates of classical mechanics) that spacetime has a universal time coordinate that is the same for all observers: one could talk about two events in different points of space being "simultaneous", and all observers of these events would see them as such. In special relativity, this is no longer true: whether or not two separate events are simultaneous depends on the observer's speed and direction of motion. One of the consequences is that if observer A sees an object moving at the speed of light, any other observer will also see it moving at the speed of light.

Special relativity is essential in making sense of electromagnetism. Without it, you get different results for the magnetic field of a moving charge depending on your own motion. With it, observers moving relative to one another will agree on the electromagnetic field of a moving charge, although they each understand that they see this 4-dimensional field from their own point of view. Magnetism is electrical attraction and repulsion under a Lorentz transformation (more or less).

General relativity (GR) is our best current descriptor of gravitation, but it is known to be incompatible with quantum mechanics under extreme conditions. Quantum mechanics has been successfully incorporated into all of the fundamental forces of nature except for gravity, so most physicists expect that an improvement to GR involving quantum mechanics exists. One of contemporary physics' major efforts is searching a theory of everything to unite the two. Part of that search involves testing GR to its limits. Such testing does not mean that experts on gravitation consider GR a failure; finding out where things break is a fundamental part of the scientific endeavor. As descriptors of nature, quantum mechanics and relativity have surpassed Newtonian mechanics, yet Newtonian mechanics is still used every day: formally, Newtonian mechanics is an approximation to special relativity for speeds much slower than light. The same relationship will likely be true of GR and whatever eventually replaces it as the dominant theory of gravitation.

Relativity as a social phenomenon[edit]

Relativity has been disparaged since its formulation.[9] It introduced a drastic shift from the established Newtonian paradigm of absolute space and time; not everyone was ready to accept such a change.

Newtonian and Copernican mechanics were greeted in some circles with similar disquiet for much the same reasons: denying that there is a privileged point of view from which to view the Universe — any direction is (physically) the same as any other direction. Newtonian mechanics denied God His position in the sky by doing away with the notion of an absolute "up" and "down" (the Flat Earth Society has a similar problem considering Earth as a spheroid).

Relativity, and Einstein himself, occupy a unique place in the popular imagination. Einstein is the stereotype of a genius, and relativity is a stereotypical genius's pursuit. This can lead someone with ambition and a little knowledge (always dangerous) to embark on a "debunk relativity" quest. Anyone who takes on Einstein and wins becomes the next Einstein, right? Popular press sensationalism can also contribute to the frenzy; every few years, there's a newspaper story about the latest "proof" against relativity. The headlines sell papers, but the substance usually amounts to a misinterpretation of a scientist or scientific paper by a reporter who doesn't grasp the science in enough detail.

Special Relativity and General Relativity, the two scientific theories generally referred to simply as "relativity" for short, have nothing to say about moral relativism.

Most Satanists probably accept cell theory. If I reject Satanism, must I also reject cell theory? Of course not. The word's root is the only similarity between moral relativism and scientific relativity. This is known as the fallacy of the undistributed middle

because the second, or middle, premise is not distributed properly to either premise.

In 1919 during a total solar eclipse, Sir Arthur Eddington observed a star close to the Sun in the sky. Under Newtonian gravitation, the light from the star would not have been bent by the Sun's gravity to be visible to an observer on Earth, but according to Eddington's calculations, General Relativity predicted that it would appear in precisely the spot where it actually showed up.

Those at Conservapedia emphasize the controversy about Eddington's 1919 observations as "proof" that relativity is a myth. This particular excerpt appears in the introduction, but other references to Eddington appear in Conservapedia's article.

Schlafly insists that the Global Positioning System (GPS) has nothing to do with relativity.[17]

Conservapedia's article implies that Newtonian mechanics can predict time dilation or otherwise affect the operation of clocks in different frames, a view expressed on the article's talk page as well.[20]

Newtonian mechanics and the bending of starlight[edit]

Conservapedia's article notes that Newtonian mechanics can also predict the deflection of light, as though gravitational lensing can be explained without GR. There are many problems with relying on classical mechanics to predict such deflection.

This section appears in the Conservapedia article to cast doubt on the postulates of relativity; in fact, the material included here, which includes interesting physics, has no conflicts with relativity whatsoever and probably would not even be addressed in most encyclopedic articles on relativity.

The article, as of 2 August 2010,[29] listed 22 such counterexamples, along with prefatory material stating that:

The article claims that any one of these counterexamples disproves relativity. But, just for good measure, it lists all 22. Here they are:

On 8 August 2010, one day after this section was written,[34] Schlafly made several edits to the article.

Chief among these are an expansion to #7:

And the addition of two new ones:

The Conservapedia editors include this conspiratorial section to portray ongoing relativity research as somehow detrimental to the theory.

Conservapedia's next section tries to extend the perceived relativity conspiracy outside the scientific domain and into the political arena.

Another section designed to tie relativity to politics and cast relativity denialists as victims of a pro-relativity censorship drive. In addition to the example below, the section hints that Robert Dicke has not won a Nobel prize because he supported an alternative to GR, even though Conservapedia's own article cites a TIME piece illustrating how Dicke's theory is not a significant improvement on GR.[45] To imply that the Nobel Prize Committee is part of an anti-Dicke conspiracy is absurd: only one Nobel Prize in physics is given yearly; many respectable scientists do not win.

For an amusing sample of delusion, read this from an older revision:

Just as "social Darwinism" arose from Darwinism, many seized upon the theory of relativity to apply it in a vague way to morality and social issues. "All things are relative" became popular as atheists and others used relativity to attack Christian values.[46]

Are black holes a liberal conspiracy?[edit]

On the talk page of the Conservapedia article on black holes, Schlafly asked someone defending the concept:

PZ Myers rightly mocked him over this.[48]

Schlafly brought up the following as a counterexample to relativity:

So the father knew that it was at the same hour, in the which Jesus said unto him, Thy son liveth: and himself believed, and his whole house.

Schlafly claims that the passage in question has Jesus healing someone instantaneously, thus violating relativity. Even by Conservapedia standards, this is ridiculous. The obvious objections were brought up: (1) The healing could have occurred very quickly, but still slower than the speed of light (2) A miracle such as this can be considered a violation of natural laws. He responded:

In reality, heat is transferred by three different methods

Furthermore, at no point does Schlafly account for how coming back from the dead is compatible with modern science.

In August 2010, many blogs and media outlets reported on Conservapedia's 'Counterexamples to Relativity' page. Some scientists even weighed in.

Andy mentioned on Conservapedia that the site was the "Number 1 Most Popular, On Talking Points Memo Tonight",[52] citing a link to a TPM article mocking Conservapedia for its idiocy about relativity.[53] The statement was later removed, and its edit history was erased from Conservapedia.