Should be moved to Conservapedia namespace... thoughts? ħuman

No, it would make it survive. This can't be a mainspace article, but surely belongs here. ħuman

I dunno, it's funny, but I think it's fine in the CP namespace. The important thing was to get it out of the mainspace without cutting off its air supply. ħuman

Flags on Coat of Arms[edit]

Sure, why not? Can you do it so it looks good? ħuman

I am inept in picture editing (Otherwise I would came up with something else (like a Reich article on Andyland with the appropriatemustasche) long ago). Just bringing attention to whoever photoshopped that some ideas/suggestions. Thieh 02:44, 5 May 2009 (UTC)

Oh please, that would be as bad tasting as that guy who posted the swastika flag that had mini swastikas in the space between the main branches of the big swastika. --Mikalosa (talk) 23:11, 2 October 2011 (UTC)

They should have their own heraldric banner - everyone else does. I know the laws of heraldry - I'm gonna think of a blazon.-- 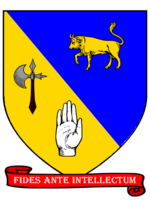 No bends sinister. Andy would not allow anything slanting left. DickTurpis (talk) 00:03, 3 October 2011 (UTC)
Okay, so obviously Christianity and Americentrism are the important things to signify. So a cross and a bald eagle displayed would be the normal way to do it. But to signify Christofascism a royal orb is better (a globe with a cross on top, commonly held by a sovereign), and the eagle is funnier if couped and langued. So the result would be Per bend azure and argent, a royal orb or counterchanged with an eagle couped and langued. Hm, not quite right. Will return to it later, my heraldry is rusty. Also side note: Bend Sinister is a great book.--

Wow, that's great! There's a tincture conflict, but no one pays attention to those anyway. Sweet.--

Nutty Roux deleted this but there was no discussion or nothing. I for one like this. AceModerator 03:28, 29 March 2012 (UTC)

The problem with your decision is that you're a cunt. Shit like this is keeping RW in the past. Do what you want. I'll still love you.

But you'll still be a cunt regardless.

My decision has nothing to do with liking or disliking the page (though my edit comment suggests different. The usual process is slap a delete tag on it and open a vote. AceModerator 03:51, 29 March 2012 (UTC)

Fuck your officious votes. I'm right and you're wrong.

Ace hasn't owned up to being owned by my balls. Delete it.

Yeah well. I am eating a home made burger and drinking local, boutique dark beers. I should change my user name to Burger McAwesomeBeers. AceModerator 04:35, 31 March 2012 (UTC)