From RationalWiki
(Redirected from Daoism)
Jump to: navigation, search 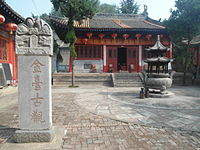 Taoism or Daoism (Chinese: 道教 daojiao or 道家 daojia), an ancient religious and philosophical tradition, originated in China. Beginning with the eponymous Tao ("the Way"), it serves up vague concepts, glittering generalities, and invisible inversions of glittering generalities—people who don't know any Chinese love to translate this stuff their own way. Taoist truth-making easily switches gears, now spinning out grandly elusive hints of the fundamental way of the cosmos, then shifting down to personal advice about flexibly adapting oneself to cosmic ways and human society, either by deliberate action and by studious non-action, called wu-wei (無爲). Iconographically, it is often represented as a union of opposites represented by yin (陰) and yang (陽). Traditionally, yin is dark, female, and receptive, while yang is light, masculine, and active. Daoists hold that this is not an essential duality, but rather two mutually constituting and intricately linked parts of a whole, both of which are at all times present in all things and may only achieve temporary preponderance.[note 1] The mythical sage, Lao Tzu wrote the seminal Taoist text, the Tao Te Ching (Dao De Jing), about two and a half millennia ago. Other classics of Taoism include the Chuang-Tzu (Zhuangzi,[1] named after its author[2]) and the Tao Tsang (Daozang).[3]

Taoism has a high potential for woo abuse, especially by those who don't really know much about the religion, and by martial artists. Many of these can be found in books with the title "The Tao of..." There are a few good ones out there, like Bruce Lee's Tao of Jeet Kune Do, but most resemble Fritjof Capra's 1975 book The Tao of Physics, which has been criticized in its efforts to link mystical philosophy and quantum mechanics[4] and for its use of outdated physics.[5]

Popularly, a distinction is drawn between philosophical and religious Taoism. Philosophical Taoism, called 道家 daojia, treats the Tao Te Ching as a guide to help one's actions conform with the way of nature. Religious Taoism, called 道教 daojiao, is focused on obtaining physical immortality and avoiding evil spirits. In reality, this distinction is completely fictional and merely serves as a method for fans of the Tao Te Ching or the Zhuangzi to separate out the ideas they find most palatable, and discard the rest as superstition. One critic states, "[M]ost scholars who have seriously studied Taoism, both in Asia and in the West, have finally ... abandoned the simplistic dichotomy of tao-chia and tao-chiao - 'philosophical Taoism' and 'religious Taoism.'"[6] Nonetheless, most popular interpretations and high-school summaries of Taoism make this division into "philosophical Taoism," which provides a way to understand the world and which is fully compatible with other religious traditions, and "religious Taoism," which includes elements of ancestor worship, animism, and alchemy.

s of Hinduism. According to Victor H. Mair, "They are immune to heat and cold, untouched by the elements, and can fly, mounting upward with a fluttering motion. They dwell apart from the chaotic world of man, subsist on air and dew, are not anxious like ordinary people, and have the smooth skin and innocent faces of children. The transcendents live an effortless existence that is best described as spontaneous. They recall the ancient Indian ascetics and holy men known as ṛṣi who possessed similar traits."Do You Believe That? The term refers to both supernatural humans and animals dwelling in the sacred mountains. [7]

In the early part of the 21st century, a new text was discovered, called the Nei-yeh (lit. Inward training), which dated to roughly the same period of the Laozi and Zhuangzi texts. The Nei-yeh is a manual for personal betterment, largely through meditative practices, and much of the more obscure language in the foundational texts can now be deciphered as references to this work. This discovery has further destabilized the belief that there is any real separation between philosophical and religious Taoism, since the fundamental distinction, that philosophical Taoism does not partake in or advocate monastic-type practices, has now been effectively disproven.[8]