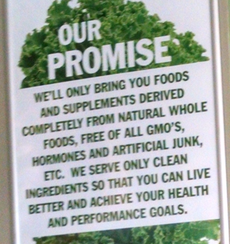 Get the "artificial junk" out of my ground-up sweetened kale smoothie!

"Nature woo" refers to the irrational belief in the goodness of all things deemed "natural." Although such beliefs sometimes have a faint basis in science, any kernel of truth is usually blown way out of proportion and then coated in woo, all in the name of a campaign by the crunchier-than-thou to prove that Mother Earth loves them more than you.

This explains why marketing managers love the meaningless word "natural" in phrases along the lines of "full of natural goodness" as they assume that customers will believe that anything that is "natural" is good for them.

Of course, nature woo ignores the fact that a vast range of perfectly natural things are dangerous or deadly. Plants such as belladonna,

; mushrooms such as the death cap,

and the autumn skullcap

; chemicals such as cyanide,

; minerals such as asbestos, chalcanthite,

are all perfectly "natural" but are in no sense good for you. In fact, the only way you might be able to survive some of these natural hazards is through the "unnatural" (artificial) intervention of science and technology; including hospitals, modern medicine, engineering and architecture.

Nature woo relies on maintaining false dichotomies between Nature, humankind and human products, as if Homo sapiens does not form a part of dear old "Mother Nature"

, and as if once Homo sapiens has generated something it ceases to be "natural". In finer terms, the distinction made seems to be between the spontaneous and instinctive on the one hand, and the "unnatural" intellectual and reasoning (i.e. not spontaneous, and thus not with obvious time-proved antecedents) on the other. In other words, appeal to nature here is effectively a chthonic version of an appeal to tradition.