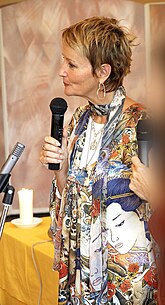 Breatharianism is the old/new age insane idea that one can live without food and drink, subsisting only off "pranic light." According to stoners practitioners, pranic light is accurate, channelled information from a huge invisible spaceship hovering over North America.[1]

See the main article on this topic: Sungazing

Breatharianism frequently involves sungazing, in the dubious belief that nourishment can be gained directly from the Sun's energy through the eye,[note 1] even though it is not a photosynthesising organ. This is likely to be just a woo-based explanation of "energy," which has little or nothing to do with the real definition of energy as a state-function of what can perform work. As with most supposed techniques of its type, proponents claim that the arts of breatharianism take years to master — usually this sort of excuse allows proponents to ignore contrary evidence based on people's failed attempts at the technique. It clearly requires a great deal of courage and self-discipline to be able to keep a straight face while talking about staring at the Sun as a viable solution to the world's starvation problems.

Don't try that! Staring at the Sun is extremely dangerous and can cause blindness.[2]

There are people who practice breatharianism or sungazing who do seem to live quite normal lives. So how do they survive?

In the first instance, anyone claiming to live on light and/or air alone is most certainly lying. In 1983, most of the leadership of the movement in California resigned when Wiley Brooks (1936-2016[3]), a notable proponent of breatharianism, was caught sneaking into a hotel and ordering a chicken pie (or buying Twinkies, according to another story).[4] Under controlled conditions, where people are actually watched to see if they can do it without sneaking some real food, they fail.

The second possible answer to "how do they survive" is that they don't. Usually, when breatharianism hits the news, it isn't because one of the leaders and proponents has been caught cheating but because one of the followers has died of extreme malnutrition[5][6] — stories sufficient to be nominated for a Darwin Award.[7]

As YouTube vlogger Thunderf00t explains in one of his videos,[8] people lose weight simply by breathing out carbon dioxide, some 30 grams per hour on average. The carbon in this carbon dioxide originates either from digesting food or (in the case of starvation) from breaking down bodily tissues in order to keep the brain supplied with glucose. So one only needs to check a breatharian's breath for carbon dioxide to prove them wrong.

The name most commonly associated with breatharianism is Australia's Jasmuheen (born Ellen Greve), who claims to live only on a cup of tea and a biscuit every few days. However, the only supervised test of this claim (by the Australian edition of 60 Minutes in 1999) left her suffering from severe dehydration,[9] and the trial was halted after four days despite Greve's insistence that she was happy to continue. She claimed the failure was due to being near a city road, leading to her being forced to breathe "bad air." She continued with this excuse even after she was moved to the middle of nowhere. Jasmuheen won the 2000 Ig Nobel Prize in Literature for her book Living on Light.[10]

Comedian and civil rights activist Dick Gregory promoted and followed the dubious fruitarian diet, and promoted but did not follow the (even more dubious) breatharian diet in his still-popular 1974 book Dick Gregory's Natural Diet for Folks Who Eat: Cookin' With Mother Nature ("The final extreme of the continuum is 'breathatarianism,' or 'eating nothing.'").[11]:11

Breatharianism of late has been crossing over with pro-ana, or anorexia advocacy.[12] Nothing like one form of woo enabling another, yeh?

Practitioners of Jainism, in advanced age, sometimes renounce food and offer justifications for doing so that sound like breatharians', on a superficial level. The similarity ends there, and the two practices should not be confused. Jains do this as a religious practice, and it is considered appropriate for the end of life; they usually do not believe that complete renunciation of food will bring long or eternal life in the flesh.[13]

If ever you do encounter a breatharian, and they manage to PIDOOMA an explanation for how the eye could conceivably convert photons into atoms and, from there, nutrients, we advise you to ask them why, if sustenance can be obtained purely from staring at the sun, no species of animal has evolved to do so as its primary source of nutrition. Even plants are unable to rely on the sun alone for sustenance; they also require soil, water, and air (the last one being where the vast majority of the atoms that comprise them actually come from).