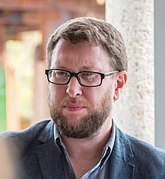 Darren Naish (born September 26, 1975) is a British palaeontologist and science writer. He began his career by investigating dinosaurs and Mesozoic marine reptiles from the Early Cretaceous geological formations of the Southern British Isles, including such creatures as Eotyrannus, the discovery of which helped to demonstrate that tyrannosauroids (the superfamily of dinosaurs including Tyrannosaurus rex and its relatives) actually had much in common with early birds[1]. Since 2006, he has been writing on his own blog, known as Tetrapod Zoology. The blog started out on BlogSpot, [2] then moved to ScienceBlogs in 2007, and, then, to Scientific American in 2011,[3] where it is still hosted today. The blog covers a wide variety of topics, ranging from fossil tetrapods to predation by eagles on prey much larger than they are conventionally assumed to be capable of to unconventional theories regarding animal taxonomy, phylogeny, and classification, which Naish sometimes seriously postulates (such as his tentative endorsement of the hypothesis that domestic dogs were not descended from wolves, although he later recanted his support for this), and sometimes satirizes in a plainly tongue-in-cheek manner (as when he discussed the hypothesis of initial bipedalism, stating that most tetrapods descended from hypothetical tiny hominid-like bipedal animals).

The blog occasionally veers off-topic and discusses non-tetrapods, such as fish, as well. Additionally, the topic of cryptozoology and cryptids has been covered on the blog, as well. Naish has tried to make the case that, as cryptozoological data can be parsed and analyzed using rational and skeptical methods of zoological analysis, it is not inherently pseudoscientific, and deserves to be taken more seriously by the mainstream scientific community. However, he also approaches cryptozoological claims from a critical and skeptical perspective. Naish initially voiced tentative support of the Patterson-Gimlin film of an alleged Sasquatch, the existence of sea monsters, and a hypothetical relict saber-toothed cat in South America, but has since disavowed these original interpretations in favor of a more skeptical outlook, apparently having been inspired, at least to some extent, by the skeptical 2013 cryptozoology book Abominable Science!: Origins of the Yeti, Nessie, and Other Famous Cryptids by Daniel Loxton and Donald R. Prothero.[4]