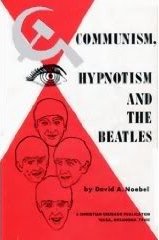 David A. Noebel (born 1937) is an American evangelist best known in the 1960s and 1970s for trying to start a moral panic over rock and folk music. He has since been very influential on the development and growth of the religious right, with a lower profile than the well-known James Dobson and Jerry Falwell but arguably one of the main players.

Noebel's books Communism, Hypnotism, and the Beatles (1965)[1], Rhythm, Riots, and Revolution (1966), and The Marxist Minstrels (1974)[2] asserted the Beatles as well as several popular folk musicians were deliberately using musical styles intended to induce hypnotism in the listener, dumb them down, and then implant such subversive thoughts in their minds as "I'm Back in the USSR". Obviously a Communist plot as nefarious as water fluoridation! He extended this even to children's records, asserting that at least one major company making children's educational records was controlled by Communist front organizations and their records contained hypnotic induction techniques while having children sing along with lyrics like "I'm a little puppet". This you see was all Khrushchev's doing to bury the free world.

His early books were published by the Christian Crusade of Billy James Hargis, before that ministry's untimely demise due to a sex scandal. Indeed, at the time of Hargis' sex scandal, David Noebel was vice president of Hargis' Christian college, and the students who came forward with lurid tales of Hargis' sexual escapades confessed to Noebel, who then was responsible for urging Hargis to step down.[3]

In 2000, he co-wrote Mind Siege: The Battle for Truth in the New Millennium with Timothy LaHaye, a book on the subversive threat against civilization from secular humanism[4]. The alleged secular humanist plot includes such familiar bugaboos as the Trilateral Commission and the National Council of Churches.

An article in the Colorado Springs Gazette upon his 2011 retirement notes that "Noebel’s influence in conservative Christian circles has been huge" and that "some observers...blame Noebel for fomenting the culture wars that began in earnest in the 1980s," specifically noting his anti-gay 1977 book The Homosexual Revolution being the catalyst for Dobson and Falwell to take up the issue.[5]