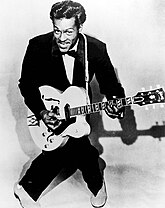 , 1957. The use of electrified instruments allowed small combos to make a big noise.

Rock music, originally and sometimes still called rock and roll, is a musical style or genre that originated in the United States in the 1950s, and became a worldwide phenomenon at some point thereafter. Rock music was one of the original crossover styles where White performers performed material taken or imitated from Black musicians. This was the cause of the first moral panics that attended rock music. There have been many since then, and rock music has always been a significant aspect of cultural warfare since its beginning.

At the confluence of Black and White[edit]

in 1951 is one of several records sometimes called the first rock and roll record. There are other contenders, but this record suggests the approximate period during which rock music emerged as a distinct genre. Its immediate ancestor was rhythm and blues

, then often called "race records" because the performers and initially most consumers were African American.

Other formative influences were swing band music and other "hot" or danceable jazz of the period. The introduction of amplified guitars and other electric instruments were a key technological innovation that made rock music possible. These technologies enabled small ensembles to make as loud a noise as a full swing band playing unamplified instruments, and enabled venues to have room-filling sound while hiring far fewer musicians. Amplified instruments also became key components of some Black musical styles, especially Chicago blues.

These "race records" became mainstays of late night AM radio DJs, who found regional and national audiences due to the propagation of AM signals at night. Once the music was on the air, there was no preventing White audiences from listening in at home. The music as a style took off when White performers like Elvis Presley

began performing rhythm and blues tunes and allowed the R&B style to influence their own performances.

This in turn spawned the first of several moral panics about rock and roll music. Racial tensions were high generally in the United States at the time. The Civil Rights Movement came into full swing during this period, and serious initial attempts were made at desegregating public schools in the wake of Brown v. Board of Education. The music, much more popular with young people than with their elders, was condemned by racists and conservative elements in American society as one more threat to traditional race barriers.[1]

International popularity came when American blues, R&B, and folk music became popular in the United Kingdom. Acts such as the Beatles and the Rolling Stones

adopted American pop and R&B styles and brought the genre to international popularity. The Beatles got their start performing in Germany, while the Stones were founded a couple of years earlier by folks who met each other due to their hardcore fandom of then-obscure American electric blues records.

Increasing musical sophistication came as a result of several factors. Rock mixed with the folk revival

of the early 1960s. A major scandal ensued when Bob Dylan

included electric guitars in his band, but his electrified sound gave Dylan even bigger hits. The 1960s counterculture and the influence of psychedelic drugs such as cannabis are also credited with making rock music more complex. Apocryphally, Dylan is supposed to have turned the Beatles on to marijuana, but increasing musical sophistication is evident even in pop acts like the Beach Boys,

(1966) is a symphonic miniature in sonata form.

It is difficult to disentangle moral panics generated specifically by rock music from other culture war issues at the time. The New Left and movements against the Vietnam War influenced rock music during this period. Acts such as Country Joe and the Fish

, and John Lennon of the Beatles were some of the many rock acts that made explicitly political and even "revolutionary" music during this period. In hindsight, the irony inherent in wealthy rock stars declaiming rants for revolution on major record company labels is more obvious, but during this period many rock stars became Very Serious People, and their opinions were sought and valued by many. These same eye-rolling critiques continued on into the late 1970's, with the band Kiss being a major target, often referred to by watchdog groups as "poison rock", which is rather amusing, seeing as Kiss is without a doubt one of the cleanest bands of its time.

condemns marijuana, LSD, and student protest movements, while (rather hypocritically) praising "white lightning", i.e. moonshine whisky. His response represents an epitome of right-wing reaction to the music and lifestyles of the young during this period. Another example of this would be the wingnut Confederacy apologist Ted Nugent, who literally gets every chance he can to bash the liberals to such an extreme that it is actually really funny, and is liable to make people wonder whether or not he is a troll. To his credit, however, he is a pretty fantastic guitarist. Certified weirdo and god-among-men Alice Cooper also identifies as conservative, but has always kept his politics and his music separate, mostly, when he is not lecturing about how Milwaukee

came into existence, amongst those who were not worthy to be in his presence. On the other hand, Kid Rock, who technically is not a rocker at all, can be a bit nutty too from time to time, but he has stated that, even if he does not agree with a law or a decision made by a president, he does not think it is right to be disrespectful, since he feels as if it were akin to his being disrespectful to the democratic process. He claims to believe that it is not his choice to instill his moral views onto those who disagree. However, he is still pretty conservative, and the scary thing is that he sounded pretty serious when he claimed that he was considering a presidential run in 2020. It would not be the first time an entertainment industry elite snatched up the office.

Southern rock, contrary to how it may sound given the demographics of people down in Dixieland

, also began as a specific kind of countercultural style, combining rock and roll with the traditional country style of vocals and guitar-style, only electrifying them to keep up with the times. One of the earliest pioneers of the genre was the Allman Brothers Band, who inspired many more to adopt the sound. Lynyrd Skynyrd, widely considered the greatest of the Southern Rock bands, was famous for its political anthems. The song "Saturday Night Special" was one of a few songs about gun violence for instance, which at the time was not an often discussed topic. Its members also wrote songs protesting the Vietnam War and dedicating at least one to the armed services. Perhaps their most famous protest song is "Sweet Home Alabama", which, within less than four minutes, discussed civil rights, the Nixon Administration, and protested then-governor George Wallace, who was an avowed racist. In the same song, Skynyrd still managed to defend the Southern lifestyle (lightly taking a jab at Neil Young, who was a friend of one of the band members), asserting that respecting your heritage is important, while also standing up for what is right. In 2012, the band, which had traditionally used the Battle flag of Northern Virginia

as their logo, the symbol being their core aesthetic gimmick, had decided that they would distance themselves from it, stating that, for them, it used to be about the spirit of rebellion and counterculture, being their own unique expression of such, but that it would not be tactful, it having become a staple of racism in more recent times, racism being something they opposed in their music. Following the massacre of an all-black Church in 2015, carried out by a rebel-flag wavin' white supremacist, the band finally stopped using it at its concerts and on its merchandise and replaced it with the American flag as an attempt to unify people[2].

Two of the most significant bands of the era were the Who and Led Zeppelin, regarded as two of the greatest bands of the British wave. They touched on a diverse series of topics, ranging from the lighthearted and absurd, to the serious and philosophical. However, perhaps one of the most unique bands of this era was Pink Floyd

, who often wrote songs centering entirely on the philosophical, the psychological, and the political, exploring a wide variety of topics like drug addiction

and social critique. Many of their songs came from an anti-establishment perspective, espousing Liberal, Libertarian, and even somewhat Socialist ideas, the most prominent example being in their 1977 studio album Animals. Roger Waters, the band's former front man, has been playing many of these songs on his various tours, particularly in response to Donald Trump and his authoritarian policies.

"Rock music" as a genre tended to break up during this period. A number of reasons existed for this. FM radio tended to replace AM as a vehicle for music, offering greater fidelity but far less range. The rise of FM stations also expanded the range of music available on radio and diminished the role of the Top 40. It also marked the end of a period of eclecticism in radio offerings.

And that's barely scratching the surface!