Clones! Too many clones!
Not to be confused with Donald Marshall, Jr.

Donald Marshall is a Roman Catholic, self-proclaimed "ex-insider of the Freemasons, The Vrill [sic] Society and scientologists". With all their powers combined, they become a YouTube video of a delusional crank the Illuminati, of course. His following is very loyal, but thankfully small.

On the second of December, 2011, a peculiar post emerged on Facebook. A man, only known as Donald Marshall, had typed up an immeasurably long post detailing his experience of being a child held captive by the Illuminati.[1] He said that he was sold to the Illuminati by his parents and since the age of 5 has been of "much help to them". On top of that, because all of the members are lusty, pedophilic, gore fetish sociopaths, they had non-consensual sex with minors. He went on saying that the Illuminati cloned him for some sort of personal/sexual gains. However, one day our hero said enough is enough and decided to combat the unwanted penises by singing(!). Allegedly, the elite pedophiles liked the songs so much (because of the originality) that they decided to stop raping poor Donald and instead profit off of him. He credits himself for writings songs for such artists as: Gotye, Rhianna, Beyoncé, Metallica and many more.[2] You may be asking yourself who actually is the main architect of his suffering; the answer is as obvious as 1+1, Queen Elizabeth II and the rest of the Royal family. Donald has said that he's been to specialists which diagnosed him with some mental disability[3] but he thinks they're all shills to discredit him. Nowadays, he continues to talk about Illuminati, Vrill Society, sexual abuse, clones, trauma and celebrities.

Ill-fated Donald still gets forced into writing songs for the celebrities as his post, from 2013, hints at. He wrote:[4]

Miley Cyrus was talking at the cloning center last night, saying that she is going to be needing songs and that I WILL be making them. I said no I'm not going to be making any more songs,... she said yes you will,... I said "Miley you are going to be in some lot of trouble in future, for keeping silent about an alien bodysnatching crisis." She said "I'll just say I was scared, aliens,... helloooo." and she chuckled...

One would think that someone at the "cloning centre" would cut the WiFi so Donald could not write how they mistreat him… Looks like there's a little hole in this fairytale Donald… Although he did try to cover it up by saying that the people who tortured him told him that no one would believe him… A bit farfetched even for this fairy tale, don't you reckon?

After his Facebook post, he sparked the interest of many cranks who, obviously, believed the fecal matter coming out of his keyboard. He's been in a few interviews since 2011[5][6][7][8] and his story has been discussed on a number of conspiracy forums.[9][10] Well, at least he hasn't written a book yet like many other Illuminati truthers did before him Donald is more high tech than other cranks! His book is... Wait for it... Digital![11] What a lovely waste of money. In addition, he has a Twitter account where he interacts with his delusional followers and adds to his story. His main form of interaction with broader society has been through facebook. He stilll posts there though less prolifically than before. Though he has not published formal bodies of material, he has been involved in interviews with radio shows and vlogs. His YouTube-based appearances and their mirrors/incarnations have garnered anything from hundreds to hundreds of thousands of views. 'Fans' of his have assisted the dissemination of his message through e-books, websites/blogs and the like.

From his version of the age old fable, these Illuminati seem to be the omnipotent kind yet they still have not found a way to take out or at least shush Donald for the past five years. He's reasoning is that because he was of "much use to them" making up all the songs they decided to let him live. They even went as far as calling him Jesus or the Jewish Messiah. Moreover, they allegedly offered him all the beautiful clone girls (as slaves) he could ever wish for, but Donald kindly denied and in return tried to poke their eyes out. They had the opportunity to stop him at the cloning centre but someone had to keep the WiFi on for some very important reasons.

Yup, are you really that surprised? People will believe anything, so long as it provides evidence for their theories. His followers even created a website as a tribute to him and an information piece for others, called the Donald Marshall Revolution.[12]

Songs he has allegedly created[edit]

According to Donald, either he wrote these songs or the "minions of Queen Elizabeth" used some sort of mind/emotion recording device to create them.

Is there any evidence for his claims?[edit] 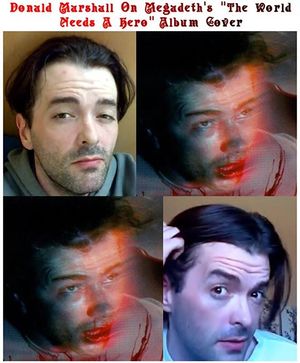 Marshall's comparison of the Megadeth cover guy and himself 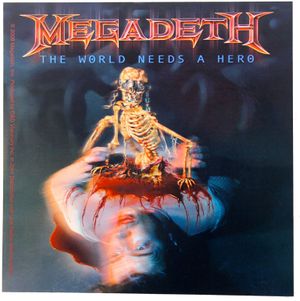 He doesn't have any concrete evidence for his claims. He only came forth with two pieces of frivolous evidence:

There's the ever-so-frequent reason that he could possibly want to be famous, but that doesn't seem to be the case here, he seems to actually believe what he's saying. His sister-in-law stated that he has paranoid schizophrenia[15] which is entirely possible. His possible schizophrenia could also be linked with delusion of reference.

Donald is easily and regularly categorized by debunkers as needing psychological intervention due to substance abuse and/or the possible schizophrenia.