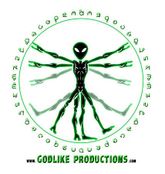 Godlike Productions (GLP) is a website/community of conspiracy theorists and various other kinds of woo-believers. Its main feature is a forum, though it also provides image and video hosting and a podcast service. In many ways it's similar to Above Top Secret. On 'GLP' you will find a high concentration of 911 Truthers, Chemtrail-believers, Mixed Christianity Beliefs, those that think CERN is a Portal to another dimension, and a large amount of people who believe there is a centralized global Elite or Cabal. There is also your fair share of cringe mixed new-age and Christian beliefs intermingled into a giant headache. You will find that most of the population of this forum also believes in all sorts of rumors and alarmist legends, such as Demons and other folklore. They will chase you away from the forum or outright insult you for questioning their logic, most of the time. As "Conspiracies such as these are so obvious you must be a shill", and other putrid mentalities arise.

Godlike Productions is mainly a huge forum/message board. Unlike other message boards, it is not split into sub-forums. Instead, the users can browse a number of Topics, categories automatically generated based on the keywords in the thread's titles (e.g. "NASA's Alien Anomalies caught on film" is going to be put in both "Science, Space" and "Conspiracy, UFOs And Aliens").

As threads tend to drop off the first page very quickly, "breaking news" and other popular threads are "pinned" at the top of the list. This usually results in the first quarter of the front page being occupied by pinned threads. All pinned topics are usually (automatically?) unpinned at the end of the day. Originally threads could be pinned and unpinned only by the moderators (hence the common demand "PIN THIS!!!!!!!!"), but later "suggest pin" buttons available to all users were introduced in the threads themselves. The introduction of a "karma" (reputation) system also allowed users to pin a thread by spending karma. As of August 2012, there are "normal pins" (red flags), "karma pins" (green flags) and "super pins" (red pin) that stay above all other pinned threads.

Threads also have a rating system, ranging between one star ("Absolute BS") and five stars ("Amazing"), but this doesn't have any direct effect to the board's system. There's a limit how many times a user can rate threads in 24 hours.

Registration is not required for posting. Anonymous users can provide a handle when posting, but if they don't, the default handle is "Anonymous Coward". Paid subscribers have their accounts "upgraded" with no useful additional features. All users are identified by a "user ID" number, based on the order of registration/first post of their IP address.

Users visiting Godlikeproductions ( GLP for short) usually have a nationality flag representing the country their IP address is from. For users with American IP addresses the American flag is shown upside down to represent GLP's view of America being in social and political distress (See "Political views/racism").

YOUR IP ADDRESS HAS BEEN BANNED[edit]

The site has the bad habit of blocking large ranges of IP addresses, purportedly to prevent trolls from evading bans by resetting their IP address. Some of the blocks are so wide they cover the whole ranges of certain Internet providers (sound familiar?) So don't be surprised if you are greeted by "SORRY - YOUR IP ADDRESS X.X.X.X HAS BEEN BANNED" when you try to visit GLP for the first time. This is likely to happen if you live in the US and your Internet connection is using a dynamic IP.

More annoyingly, the block prevents people not only from posting on the board, but even from reading it. There's the running suspicion that the wide-ranging bans are used as a fundraising tool: paid accounts are exempted from the range blocks, and the ban message screen suggests getting one. This ban process typically happens automatically, for example, after posting as an AC (Anonymous Coward), the system automatically flags your IP for a ban, Regardless of the type of post you make, If you respond to your own AC post quoting the previous one, or consecutively reply to the same message. On the other hand, if you care about reading the site, it provides you a simple 3-line Unban Request box at the bottom of the ban notice.

Godlikeproductions promotes mainly topics of discussion that reflects the dysfunctional aspects of the government, social, cultural, political and economical establishment. The source of which are non mainstream "breaking" news events that reports unusual, odd, inflammatory or distressing news of a disastrous nature commonly referred to as "doom." The discussions in such threads can provoke spirited debates to outright disparaging insults to thread posters and even IP bans (see "YOUR IP ADDRESS HAS BEEN BANNED"). Threads that are disparaging to racial, ethnic, or political liberal views are often accepted and promoted. Anti-establishment, anti-corporate and some "anti-government" threads are also popularized on GLP.

Other popular discussion are metaphysical in nature that can be critical of religious institutions, and many posters present their experiences and opinions on such topics that can again produce spirited debates with agreement to outright disparaging insults.

Due to anonymous posting, threads in GLP can be... lively, especially if they involve "debunkers" or followers of opposing conspiracy theories. Moderation (in both senses) is low to non-existent, though people can be banned for excessive behaviour and/or threats. If you enter GLP with the intent to argue, prepare for long, futile threads (100+ pages sometimes) and obtuse opponents that seem to suffer from ADD.

GLP attracts a mixed crowd whose views cover every possible conspiracy theory ever thought of, and some that are being developed on the spot, with dramatic (over-)reactions to current events. Some of the participants appear to be trolls, while others don't mind a bit of trolling to get rid of those pesky "debunkers" that poke holes in their arguments. Expect to see the "Shill Warning Alert" smiley a lot, though to the regulars' credit, expect to see the "B.S. flag" smiley a lot, too. (And yes, those are smileys. The full collection needs to be seen.)

Nancy Lieder used to host her "chats" on GLP, before she decided she needed a place with fewer opponents. (Yes, she's too crazy for GLP.) Mensur Omerbashich threatened the site, among others, because of discussions of his claims about Comet Elenin.

If you try to post on GLP a reference to Above Top Secret, either a hyperlink or the name itself, you'll get an automated warning: "*** Because Above Top Secret staff are a bunch of uptight control freaks, we do not allow their content or references to their website to be posted or linked to on GodlikeProductions.com *** Attempts to circumvent this warning will result in ban." (as of August 2012) Godlike Productions is not keen on the rest of the competition, either. It also bans any mention of the words "Alex Jones", "Infowars", "Prison Planet", etc., not to mention that posting links to the JREF (James Randi educational forums) or Snopes will also get you banned.

Godlike Productions is not universally well-accepted among fringers. A somewhat persistent idea is that sites such as GLP and Above Top Secret have been set up by the powers that be for some sinister purpose (e.g. monitoring and identifying free-thinking dissidents whackjobs). In the case of GLP there's the particular allegation that it is associated with the Tavistock Institute[3] (which has an established place in the world of conspiracy theorists), and posting the name "Tavistock" will result in an automatic ban.

Since the election of Barack Obama, GLP has become increasingly right-wing in its overall outlook, in addition to becoming ever more racist. Several thread topics will include words like "naggers" and "dindus", and if one reads the threads, the overall racism of the site will become quite clear. Michelle Obama, for example, is referred to as "Moochelle" quite regularly, and a sizable number of the denizens on the site refer to her as a "wookie" (there is even a common smiley depicting such), or believe her to actually be male. A link to an article at Stormfront was pinned by a moderator as being worthy of value, showing the overall depths to which this site has dropped. In more recent years, since Donald Trump's election, content is heavily censored to support a racist perspective. Anyone suggesting even the most common sense racial etiquette will be met with bans and post deletion.

Since the start of COVID, the BLM protests and all the way back to Trump's election the site has gone full racist. New ways to avoid the censors or reports, one use is the word "Joggers" after the Araby shooting. "J ws" is another. The site owner had made threads on the racism issue but has not honored his word. It was done as a cover for the fall of the site. Many moderators, long time ones, are full on racists.

If you type a comment you'll notice another thread will bump either above or below yours. Check that thread and you'll see that another comment is made at the exact same time you made your comment. Keep doing it and you can spot how many Bots are being used in the forum. Some of the Bots are under member accounts and some aren't. There are also Ban bots who read what you post, For example if you try to criticize the forum in general, Expect to be banned by a bot, or someone far too eager to press the ban-button. Try typing Low-IQ and you will get banned. I believe it happens too fast for it to be a human reaction, so it is likely a ban-bot.

For the last couple of years, GLP has required a membership contract which you will see when accessing the site for the first time. It starts "You are attempting to enter a private internet forum. Entrance to this private establishment requires membership but not an account." This introduces a new element to GLP, which had always been an open forum accessible to anyone, and makes it quite clear it does not consider itself an ordinary forum now.

Apart from the usual rules you'll find anywhere else and which can be rather stringent, there are also some peculiar ones (such as in effect disallowing users from quoting material posted on GLP elsewhere). Additionally, it requires you to accept the Terms of Service and the Privacy Policy just to read the forum.

As of July 2018, you'll find you have to be a member to even read the forum posts, as guest access is no longer allowed.

As of April 2021, If anyone cares, GLP routinely bans and unbans anonymous users to increase registered user count. This practice has led to a large amount of "AC's" leaving the webpage, as it went members-only for a long time in early 2021, it is now open to Anonymous posting.