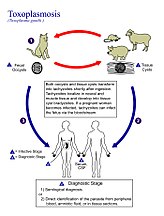 Toxoplasma gondii is a parasitic protozoan that causes toxoplasmosis in humans[1] and other animals. The domestic cat and other felids are the parasite's definitive host.[2]

Humans can potentially catch toxoplasmosis in a number of ways:

A healthy human would normally be unaware of an infection with T. gondii, at worst experiencing short-lived, mild flu-like symptoms. An infected individual then becomes immune to new T. gondii infections, becoming an asymptomatic carrier for the rest of their lives. T. gondii infections at this point are typically asymptomatic, and carriers are noted as having "latent toxoplasmosis".[4]

Pregnant women who have not previously been infected are advised to take extra precautions against a first-time infection. Infection during or slightly before pregnancy increases the statistical risk of miscarriage or stillbirth. The infection can also pass to the unborn child as congenital toxoplasmosis. This can sometimes have serious health consequences for the child.

As with many opportunistic infections, the usually unnoticeable T. gondii can be very dangerous for people with compromised immune systems.

Believe the cranks, and T. gondii is also controlling the minds of large portions of humanity by turning us gay, influencing our politics, or preparing us for the New World Order.

There is some reliable science behind the basic idea that toxoplasmosis might influence host behavior.[5] That part, at least, wasn't just extracted from a wingnut's rectum.

Latent toxoplasmosis has been shown to influence the behaviour of rodents in ways that increase the likelihood of their predation by cats. They lose their aversion to the scent of cat urine and become more active, more bold, and are thus more likely to run into a cat with fatal results. There's a very good reason for this — domestic cats and other felids are the definitive host of T. gondii. It can't win the game of life by hanging out in a rodent intermediate host; the infected animal needs to get eaten by a cat in order for the life cycle to start over with the production of oocysts.

Originally believed to be asymptomatic in humans (and cats) with healthy immune defenses, there is now mounting scientific evidence to suggest that T. gondii infection might influence human behaviours and/or psychology.

Some scientific research suggests that T. gondii may affect human behavior similarly to how it impacts the behavior of rodents: by delaying reaction time and lowering hosts' risk aversion. One double-blind study revealed that humans with latent T. gondii infections had "significantly slower reaction times" and a "decrease of psychomotor performance".[6] While this is clearly advantageous for the parasite when it occurs in mice, humans aren't any more likely to be eaten by a cat once infected. However, humans with latent toxoplasmosis are two to six times more likely to get into a traffic accident. [7][8]

Psychologically, a strong correlation has been shown between certain mental health disorders, particularly schizophrenia, and latent toxoplasmosis.[9] A meta-analysis of T. gondii infection for all major psychiatric disorders found that there is a likely association between T. gondii infection with several psychiatric disorders (schizophrenia, bipolar disorder, obsessive-compulsive disorder, addiction), but not major depression.[10] Science is cautiously exploring the nature of the connection; it is important to note that no real scientist has concluded that this is a straightforward case of cause and effect. It might simply be that people predisposed to certain psychological disorders are also predisposed to T. gondii infection for some unidentified reason.

The pseudoscience and the crazy[edit]

The idea of a parasite with even minimal ability to influence our behaviour without our knowing it is pretty creepy. Scary, even. It's actually surprising that more cranks haven't seized on the idea. Of those that have, they don't agree on whose crank agenda is the rational and safe one, and therefore do not agree on which self-destructive behaviours are being "controlled" by T. gondii. So, we have our pick of:

During 2013, some nationalist media, such as Dispatch International,[15] brought up the theory that T. gondii caused "political correctness" in the Western World, and reluctance to oppose Islam.

In short, the Swedish language article argues that any political decisions the author views as stupid may be the result of toxoplasmosis. It argues that the parasite is causing risky and self-destructive behaviour in its human hosts.[16]

All this assumes, of course, that the hard-right position on immigration and integration is the correct behaviour for safety and self-preservation in humans; the article does not consider that it could, instead, be the right-wing camp who arrived at their own convictions under the destructive influence of T. gondii.

The article offers a ray of hope to the oppressed nationalists, recommending that decision makers should be immediately vaccinated against T. gondii. There isn't actually a human vaccine, yet, but maybe they're proposing to stick politicians with the sheep version?

There is some "research"[17] into the notion that homosexuality is an acquired disease.[18] While some argue that gay-disease is almost certainly due to an unknown viral agent,[19] others have latched on to T. gondii.

It's possible that the initial association of T. gondii with homosexuality is based on the fact that the infection is extremely dangerous to an individual with AIDS, with severe or fatal infections not uncommon before HIV became manageable. The parasite has therefore been studied in connection with population groups at higher than average risk of contracting HIV, including homosexuals.[21] As with the Swedish politics claim, the theorists assume that homosexuality is a faulty and self-destructive behaviour (as opposed to none-of-their-damned-business). It might just as easily be a case of T. gondii creating a tendency towards homophobia and other socially divisive attitudes. If these people are losing any sleep, it's probably because they're scared of being exposed to some theoretical pathogen while unconscious, and waking up gay. The fact that there are no documented cases of this happening, ever, should be a big clue as to the level of credibility everyone should give to this idea.

It's the New World Order programming us to be unthinking cogs in the sheeple machine, which ought to be giving everyone who isn't infected sleepless nights, if only we'd wake up and see the truth.[23][24]

We can reasonably demonstrate that cat-avoiding behaviours are beneficial for a rodent, and that rodents getting themselves eaten more frequently by cats is of benefit to T. gondii because it completes the parasitic life cycle. The cat appears to get an easier-to-catch meal out of the deal.

It's less obvious what T. gondii gets out of influencing human politicians to make tolerant decisions on immigration and foreign policy (since the bug is global already and isn't choosy about ethnic origin in its hosts), or out of turning straight people gay (since the only way to catch it from another human is to eat them raw, who has sex with whom is of no obvious relevance to the pathogen's life cycle), let alone what it gets out of programming the human race to ignore all the really obvious clues everywhere that the New World Order will be taking over any day now. In the latter case, it might be possible to argue that T. gondii, and possibly all the domestic cats, are being actively controlled by the global elite, and are as much victims as we are.

One unproven but more rational suggestion is that "crazy cat lady" behaviour — and by extension, humanity's preferential treatment of the domestic cat — could be caused by T. gondii.[25] While "crazy cat lady" is a stereotype rather than a medical diagnosis, there are certainly cat-hoarders who lose all perspective about their own welfare and, in spite of their devotion, that of their cats.

A vaccine for toxoplasmosis exists for sheep, where infection of pregnant ewes can cause abortion or stillbirth. Thus far, there is no vaccine available for cats or for humans, since the infection was not originally thought to be symptomatic in individuals with a strong immune system, but research is ongoing. There is also serious science happening on the human behavioural side, trying to find out why suicidal tendencies and certain mental disorders like schizophrenia correlate so strongly with toxoplasmosis.[26]