Greenwashing (also known as Ecollusion) is the practice of using woo, public relations tricks and/or superficial actions to improve a company's "green PR" without them actually doing much for the environment. Greenwashing is used to convince consumers that they are helping to "save the planet" by buying certain products that are in fact no more environmentally friendly than they were before — this improves profitability for a company as greenwashing can be cheap, but the increased revenue from a misled public can be massive. At best, greenwashing is about misleading the public into thinking that something is far more environmentally friendly than it really is; there may be some advantages to a product but not miraculous ones as the "green PR" implies. At worst, greenwashing is actively deceiving an audience or covering up the real environmental impact of a company or product.[note 1]

Greenwashing often hypes up environmental aspects or takes them out of context — something that is better for the environment is not the same thing as something that is good for the environment. Some key examples are the likes of clean coal, which is considered to be a complete oxymoron. While "clean" coal is often cleaned with respect to additional pollutants such as sulphur containing compounds, its name is highly misleading — when you burn a fossil fuel, there is no such thing as clean. It may be better than burning conventional coal, but to describe it as "clean" is nothing more than a PR stunt.

Further examples include various forms of automotive woo, which claim that a specially reformulated gasoline or adding some goo to your oil will cut pollution and improve fuel efficiency. In reality, just driving sensibly and keeping the engine in good condition produces the most dramatic drop in fuel consumption, as has been shown on several episodes of Top Gear where cars have been shown to travel far beyond their estimated mpg just by simple and cautious manoeuvring.

aircraft has been described in publicity as "A better environment inside and out" due to its slightly increased efficiency over other aircraft — however, this doesn't mean a plane is good for the environment, as the mode of travel is still highly polluting.

In 2015, the EPA and the California Air Resources Board accused Volkswagen of "installing software that switches on pollution controls during smog tests, then switches them off again so that drivers can enjoy more engine power on the road."[1] On January 4, 2016, the US Department of Justice filed a formal complaint against VW. "The complaint alleges that nearly 600,000 diesel engine vehicles had illegal defeat devices installed that impair their emission control systems and cause emissions to exceed EPA’s standards..."[2] Due to the scandal, the FTC accused VW of greenwashing in March of 2016.[3]

The marketing firm TerraChoice published two reports, first in 2007, then in 2009, detailing a list of the "sins of greenwashing", i.e. categories of greenwashing tactics. The initial report in 2007 included six sins of greenwashing[4], while the second report brought the tally to seven. Many of these "sins" show similarity to specific logical fallacies. 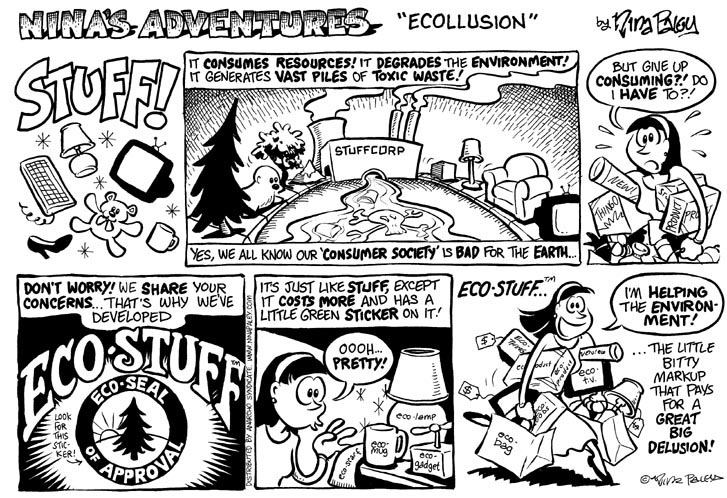