As a child and into her youth, Garrett showed symptoms of a dissociative identity disorder and she reported to have heard voices that were not real.[1] She also experienced delusional fantasies and hallucinations.[2]

Garrett did not believe in life after death and attributed her supposed spirit controls in her séances to the product of her own subconscious.[3]

The R101 airship and séances[edit] 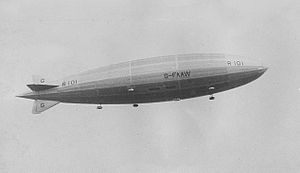 Garrett was most famous for the alleged R101 séances that took place in 1930. In these séances, it was claimed by spiritualists that Garrett had channeled secret information from the spirit of Lieutenant Herbert Carmichael Irwin who had died in the R101 airship crash a few days before the séance and have claimed there was no possible naturalistic explanation for knowing such information. Skeptics have debunked the absurd paranormal or spiritualist claims regarding the R101 séances. The entire thing had been fabricated by spiritualists.

Garrett's notes and writings show she followed the building of the R101 and that she had friends in high places. The magician John Booth speculated that aircraft blueprints could have easily been passed to her by a technician from the airdrome.[4] However, whilst skeptics are in agreement with Booth that Garrett was a fraud, he did not personally examine the séance material regarding R101, no secret accomplice was needed.

Paranormal debunker Melvin Harris went back to the primary sources and read over the R101 séance material and discovered that the whole thing was a hoax, the entire thing had been fabricated by spiritualists, as the alleged communications themselves contained no secret information about the R101 airship. Archie Jarman also researched the R101 airship and compared the information to Garrett's and wrote an 80,000-word report on the topic concluding that the séance information was valueless and that we should "best forget the psychic side of R-101; it's a dead duck — absolutely!"[5]

Unfortunately spiritualists such as Michael Prescott and Michael E. Tymn who have not researched the topic in depth continue to spread the myth that Garrett communicated with spirits from the R101 airship.[6]

Garrett founded the Parapsychology Foundation in New York City in 1951 which has been known to promote pseudoscience.