From RationalWiki
(Redirected from Irish)
Jump to: navigation, search

The flag of the Republic of Ireland.

The flag of the United Kingdom. 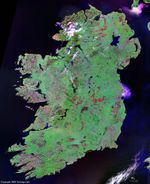 The island of Ireland, as seen by space aliens.

Ireland is an island off the northwestern coast of Europe. It is home to both the Republic of Ireland, an independent country, and Northern Ireland, which is a part of the United Kingdom.

Most natives of Northern Ireland refer to the country as "Southern Ireland", "the South" or "the Republic". It can cause significant confusion to refer to the Republic of Ireland as "Ireland". Especially with people foreign to Ireland. This, of course, was the intention.[2]

See the main article on this topic: The Troubles

Until U.S. President Bill Clinton sent former Senator George Mitchell over to help with negotiations, instructing him not to come home until they stopped fighting, Ireland was the scene of ugly violence over the issue of Northern Ireland. The British Army acted as an occupation force, and the Irish Republican Army and "Loyalist" paramilitaries both engaged in terrorist attacks on civilians in various parts of Great Britain and Ireland. The Irish were also brutal to each other. The British Government claimed that the army prevented this violence and brutality from escalating further, despite actually murdering children and boy bands. This battle, essentially fought over whether to allow Northern Ireland to come under the control of the Republic of Ireland, was referred to colloquially as the "Troubles".

Amazingly, things have quieted down tremendously since the agreements were forged. This has led to a skyrocketing of tourism, since so many Irish emigrated over the last century or two with very few of them returning (Frank McCourt

and his family were extremely unusual in this regard), and they are prime candidates for nostalgia and genealogy trips to the "Emerald Isle". Ireland's economy was growing at almost double-digit rates for many years after the blowing things up stopped.

To understand the conflict in Ireland, one must understand the political ideals of both sides and the history of British (and English) control in Ireland. The Nationalists believe that the whole of Ireland should be united and that the British government has no valid claim or ownership over Ulster. The Loyalists believe the exact opposite, that British control in Ireland is right. The Irish War of Independence ended in 1921 with what is now known as the Anglo-Irish Treaty. The treaty was what separated the island in two. The provinces of Connacht, Munster and Leinster were relinquished while most of Ulster remained under British control.

Of course there were certain people who disagreed with this treaty, which resulted in the Irish Civil War. Eventually the Irish managed to end this war and found their own Republic and the British continued their oppression of Catholics in the North. Catholics in Northern Ireland were perceived to have been treated like second class citizens and their votes had counted for less in certain local elections - this was largely due to the fact that the votes of landowners and landlords (the majority of whom were Protestant Unionists) held greater value in elections. The foundation of the Provisional Irish Republican Army (also known as the "Provos") occurred well before any of these grievances took place, and had been brewing for decades, and a Civil Rights Movement had also started. This was an extremely dark time for the North and both sides were guilty of killing civilians. The most infamous is Bloody Sunday, where civil rights protesters were gunned down by British paratroopers without provocation in 1972. This particular event has provoked much controversy over the years as no arrests were made and the soldiers claimed that the protesters had weapons and fired first. This has since been proven to be a lie, and British Prime Minister David Cameron condemned the soldiers involved in the massacre.

In May 2015, The Republic voted by a large margin to modify the Irish constitution allowing same sex marriage on equal terms with heterosexual marriage. This happened despite opposition from the Irish Roman Catholic Church. Northern Ireland also allows gay marriage.[3]

Except in very limited situations, abortion was illegal in Northern Ireland until 22 October 2019. Before that date, women could and did travel to other parts of the UK for abortions but had to pay for the procedure as well as travel and accommodation costs. Effectively the poorest women were denied abortions. Pills that induced abortions were readily available online and many women took them even though it was illegal.

In the Republic of Ireland, a referendum on the 25th of May 2018 passed allowing the constitution to be modified permitting abortion. This was then reflected in law on the 18th of September 2018[4] allowing abortion in most cases before 12 weeks. As of 2019 abortion services are available but have suffered some growing pains.

Historically Ireland since the Great Famine and then later continuing with the founding of the Saorstát Éireann and the An Poblacht, the country has always been predominantly a land of emigration rather immigration. However, since the economic boom of the 1990s which created the Celtic Tiger

, the country has become an attractive place to move to. The first wave of immigrants came from the UK, many of which have Irish extraction. Later comes in the 2000's a mixture of refugees and Central and Eastern Europe immigrants arrived, helped by the country's liberal immigration and asylum policies and the expansion of the EU to including the poorer former Eastern Bloc in 2004. Also, another factor was until 2004, Ireland was the only country in Europe that had unconditional jus soli

citizenship and many asylum seekers took advantage of this to create a version of "anchor-babies" with a large number of pregnant refugee women giving birth in Irish maternity hospitals. [5] This changed when a constitutional amendment was passed, removing this clause. [6]

While in general many of these immigrants have been welcomed and happily settled in the new homes, there has been a growing momentum by the nascent far-right in Ireland like the conspiracy theorist Gemma O'Doherty. They often use the same language and tones like other far-right movements in Europe and North America, in that they change the colour of the country and not integrating into Irish society.

The Republic's political system has long been trapped in the 1920s with the main division between Fine Gael (who supported the 1921 Anglo-Irish treaty that established the partition of Ireland) and Fianna Fáil (who opposed the treaty). Both were otherwise moderate right-wing and Catholic. The left has been represented by the Labour Party (traditionally the third or fourth-strongest party) and the southern branch of the renewed Sinn Féin (there was an older Sinn Féin which split into Fine Gael and Fianna Fáil). There is also a Green Party and various other minor parties.[7]

Fortunately the extreme right wing is not strong. Renua was founded in 2015 by Lucinda Creighton who quit Fine Gael because of her opposition to abortion. In the 2016 general election it campaigned on a manifesto heavy on law and order (three strikes and you're in jail for life) and a flat tax. It won 2% of the vote, not enough for any seats in parliament but enough to get a bit of government money[8], before losing that government funding in the 2020 election.

More extreme than Renua, but no more successful electorally, is the National Party and its predecessor the anti-abortion campaign group Youth Defence. Justin Barrett

features prominently in both, and is leader of the National Party. He and they are opposed to abortion, immigration, the European Union, homosexuality, and much more, but fond of the death penalty. Youth Defence was initially formed to oppose divorce in the 1986 referendum on the subject, and later focused on opposition to abortion; its chief tactic seemed to be picketing politicians' houses and reproductive health clinics. It shared offices with eurosceptic group Cóir and also had connections with the German neo-nazi party the National Democratic Party of Germany.[9][10]

There are no snakes in Ireland (unless you count those heartless bastards who ran the Magdalene laundries). Legend has it that St. Patrick, the Patron Saint of Ireland, banished them. St Patrick was so efficient at this that not only did he banish the snakes from Ireland, but he also removed all paleontological evidence of them having ever been there in the first place. There is a popular legend that the "snakes" are Pagans but St. Patrick's role in stopping Paganism is very exaggerated by Christians.[11] and according to author P. Sufenas Virius Lupus "St. Patrick’s reputation as the one who Christianized Ireland is seriously over-rated and overstated, as there were others that came before him (and after him), and the process seemed to be well on its way at least a century before the “traditional” date given as his arrival, 432 CE."[12]