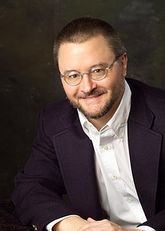 Michael Prescott (1960–) is an American writer, blogger and paranormal researcher.

Critics point out that Prescott does not look at data objectively and that he is a promoter of pseudoscience.

Prescott grew up in New Jersey where he attended Wesleyan University, majoring in Film Studies. He has had some success as an author of a number of horror and suspense novels which have sold over 2.5 million copies in America.[1]

Prescott's interests include intelligent design, Jesus, the Bible and parapsychology.[2]

Prescott owns a blog where he posts on paranormal, spiritualism and topics related to life after death but has not actually done any experiments or investigations into parapsychology other than read books on the topic. On his blog he claims that everything from mediumship to levitation is scientifically valid. He usually rants against "materialist skeptics", and even opposes those within parapsychology who are skeptical about certain phenomena. Prescott rejects the psychological explanation for the paranormal, he also rejects hallucinations as an explanation for certain phenomena.

which Cesare Lombroso believed to be real.

Prescott has written that ectoplasm is genuine. If he had done some real research into experiments carried out by scientists during séances he would see that ectoplasm is universally discredited even amongst other parapsychologists since all investigations into the substance turned out to mostly cheesecloth, muslin, plastic dolls and the result of fraud. He also claims the mediumship of Eusapia Palladino is genuine, however Palladino was exposed as using trickery.

As Prescott believes ectoplasm is real, in defense of this view he cites the work of the spiritualist Cesare Lombroso

(1835-1909). If you look in the photo you can easily see the figure in the back is a doll but Lombroso claimed such photos were genuine. Considering that Prescott believes the work of Lombroso is scientific evidence for life after death, this seriously undermines his credibility.

Prescott has also written that many of the Victorian séances and mediums were genuine and ignores most skeptical data on the subject. There are many books published and even papers written in journals written by psychical researchers (e.g., Society for Psychical Research) in that era who had exposed many of the Victorian mediums as using trickery yet Prescott ignores most of this data.

In the case of fraudulent mediums, the Fox sisters, Prescott writes "I understand that skeptics will be content with the toe-cracking theory, especially since Maggie herself espoused it (despite her later retraction). But I would like to see someone with such snap-crackle-popping joints reproduce the effects that the Fox sisters obtained." What Prescott does not mention is that Margaret herself demonstrated to a massive public audience at the New York Academy of Music how she and her sister had performed the toe-cracking phenomena.[3]

On his website, Prescott claims the medium Daniel Dunglas Home was never caught in fraud. This is a false statement as Home was caught in fraud a number of times by different séance sitters.[4] Prescott has also claimed that it was unlikely the materialization medium Minnie Harrison was fraudulent. Actually, Harrison was a blatant fraud who used to dress up in a cloth and pretend to be a spirit in her séances.[5]

Prescott shows great ignorance of Occam's razor, he usually advocates a far-fetched paranormal explanation instead of a simple naturalistic one. For example, one of Leonora Piper's trance controls claimed to be Julius Caesar, but spelt his name incorrectly as "Caezar". Prescott claims that "this fits in pretty well with the idea of mischievous or malicious earthbound spirits carrying out impersonations." It is more likely that the alleged trance control was either a joke or a subconscious creation of Piper.[6]

In the case of the discredited medium Arthur Ford, Prescott admits he did perform fakery but also claims he had "legitimate psychic abilities".[7]

Revealing his will to believe anything, Prescott has written that thoughts may be generated by the collective minds of séance sitters and similar to spirits, take on an objective existence.[8]

Prescott has written that the reincarnation studies of Ian Stevenson are paranormal in origin.[9] According to Prescott "perhaps many supposed reincarnation cases are actually instances of [spirit] obsession or possession. This hypothesis may not address all the facts, but possibly it's a good starting point."[10]