From RationalWiki
(Redirected from Fear of radiation)
Jump to: navigation, search

Fear of radiation, sometimes called radiophobia or even radiation hysteria, is a common social phenomenon. Ionizing radiation is obviously not healthy in large doses, and in some situations there are legitimate reasons to be afraid of it. However, the level of angst it generates is an overreaction[2] and in many cases ends up being a bigger problem than radiation exposure itself. 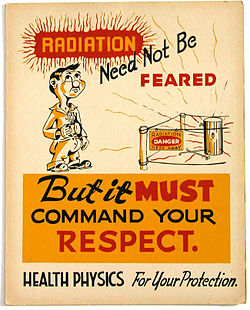 Just so you know.

Fear of radiation leads to pervasive special pleading, where risks associated with radioactivity are perceived as more undesirable than equal risks from something non-radioactive. This creates a severely distorted picture of dangers resulting from the use of nuclear technologies, and is an important factor driving the opposition to them.[3][4]

Concerns about nuclear radiation are rooted in several phenomena. First of all, nuclear chemistry and nuclear physics are difficult fields that are rather removed from everyday experience. Strict regulation of radioactive materials compounds this problem, making popular science experiments involving radioactivity difficult or impossible. As a result, public understanding of radioactivity is very poor compared to other fields of science. Even well-educated people without specialist knowledge, such as journalists, do not understand basic concepts and make elementary errors. This makes the field prone to misinformation.

The second big reason is the Cold War, when threats of use of nuclear weapons played a key geopolitical role. The devastating power of nuclear explosions, showcased at the end of World War II during the atomic bombings of Japan, caused many people to associate the possibility of nuclear war between U.S. and the Soviet Union with biblical prophecies about the Armageddon. It was easy to assume that nuclear bombs kill mainly through radiation, since it is something that conventional explosions do not create.[5] This misconception was used by scientists campaigning in favor of nuclear disarmament, who exaggerated the risks of radiation exposure[6][7] to make their message about nuclear warfare more personally relevant. Some of the organizations they created later morphed into the modern-day anti-nuclear movement, elements of which continue to demonize radiation to oppose civilian applications of nuclear energy.

The situation is not helped by the fact that radiation protection bodies often fail to effectively communicate. Due to an atmosphere of distrust, they strenuously avoid simplifications that could be interpreted as lying or trying to mislead, but as a result their message sounds weak or opaque to non-specialists.[8]

The most obvious effect is the reduced use of nuclear technology, including nuclear power, medical imaging, nuclear medicine, and food irradiation, and its increased cost due to having to deal with restrictive regulation.[9] The alternatives to them are often more expensive, less effective or more environmentally destructive. Naturally, nuclear technologies are not a magic silver bullet and have their disadvantages, but a faulty assessment of their dangers benefits nobody.

Perception of nuclear energy is perhaps the most affected. The common perception is that nuclear power is dangerous, even though it is actually one of the safest industries to work in[10] and kills the lowest number of people per unit of energy produced.[11] When an accident occurs at a nuclear power plant, it is guaranteed to be front-page news, no matter its real impact.[12][13] When a genuinely severe accident happens, the adverse effects of the fear of radiation can be more severe than the effects of radiation itself (see below).

Quite ironically, fear is what makes dirty bombs a viable terrorist weapon. While the damage from such a device might not be much greater than from the conventional explosive alone, the fear of radiation among the public makes them very useful for disruption.[14]

The negative effects of an unreasonable fear of radiation are well documented in the aftermath of the Chernobyl disaster. After the accident, the only radiation-related disease that increased in the surrounding population was thyroid cancer. It is a serious ailment, but generally treatable. At the same time psychological and psychosomatic disorders, such as anxiety, stress, depression, alcoholism, suicide and cardiovascular diseases, increased sharply. These were related not to radiation exposure, but to the intense fear experienced by people affected by the disaster.[15] This irrational fear resulted in many people overlooking the fact that some places on Earth have a natural background radiation higher than the amount to which the Chernobyl incident subjected most of downtown Pripyat.[16]

The fear of radiation manifested itself on many occasions after the 2011 Tohoku earthquake and tsunami in Japan, which severely damaged a nuclear power plant. The nuclear crisis received 51% of all news coverage about the disaster.[13] No human being was killed by radiation released in the accident, although five people died at the plant from other causes (tsunami and stress).[17] Other events, such as a refinery fire,[18] a dam collapse which actually killed some people,[19] and the general devastation and 30,000 dead and missing from the earthquake and tsunami, did not receive as much attention.

Overly strict regulations only made the problem worse. Many batches of food which showed increased radioactivity were considered unfit for consumption, even though it would be virtually impossible for anyone to suffer any ill effect from eating it.[20] Eating the worst contaminated spinach in large quantities for a year would result in as much exposure as a CT scan. CT scans are a routine medical procedure and result in about 10 mSv of exposure, or about three times the yearly natural background. It would be impossible to eat the contaminated batches of spinach for an entire year, because it would spoil. Similar over-conservatism prompted a warning against giving tap water to babies, which did nothing except scare people that their water supply is in danger.[21] If an infant drank 1 liter of tap water every day for a year (hardly possible), the exposure would be about as harmful as a CT scan is to an adult (basically not at all). Iodine-131 decays almost completely in 90 days. Given that the reactors were damaged and the fission process was stopped, they would not produce any new iodine-131, so it would be impossible for the reported level of contamination to persist over an entire year. The contaminated spinach and water never posed any real danger to anyone, but paranoid regulations made them seem like a big problem.

No one died from radiation in Fukushima, but the extensive evacuations caused severe disruption in the lives of thousands of people and resulted in 1600 deaths, many of them from suicide.[22]

There was never any danger of adverse health effects for people outside of the 30 km zone around the plant, but the scare spread well beyond Japan's borders. In the U.S., fake maps of fallout supposedly caused by the accident, which showed the west coast as receiving lethal doses of radiation, spread virally and resulted in a brief panic.[23] In mainland China, there was a run on iodized salt, resulting from the mistaken belief that the iodine in the salt will have the same effect as iodine tablets.[24] A similar run on iodine tablets happened in the U.S., and was even endorsed by the Surgeon General.[25]

In India, a civilian was killed and 20 were injured after a protest near the planned Jaitapur nuclear plant intensified and turned violent after news of the accident in Japan.[26]

The German decision to phase out nuclear power after the Fukushima accident is the prime example of radiation fears driving national policy. The switch to other forms of energy is expected to cost around $340 billion over 10 years in required investments alone[27] (which represents over 1% of German GDP), will increase carbon emissions and electricity prices, and might endanger the shift away from coal power in Europe.[28] The expected increased demand for natural gas from Germany is causing Russia to extend the lives of its RBMK (Chernobyl-type) reactors in order to be able to sell more of its gas, so the move is counterproductive even from a nuclear safety standpoint.[29]

Concerns about nuclear radiation and the considerable lack of knowledge among the public on this subject are often exploited in debates where they are irrelevant, as the radiation exposures associated with the discussed activity are either negligible or don't exist at all.

There was a wave of opposition to backscatter X-ray scanners used on airports on the basis of the radiation exposure caused by them and its health effects.[30] This mindset led to an EU ban.[31] In reality, the dose is insignificant even for frequent travelers, and far lower than the dose received during the flight itself.[32] What should drive the opposition is the unreasonable invasion of privacy and the overall paranoia and security theater of air travel. However, these genuine arguments are apparently too abstract to mobilize a substantial opposition.

Myths about the harmful effects of wireless radiation signals are strikingly commonplace, even so far as to force warning labels on cell phones,[33] even when the risks are shown to be minimal to non-existent.[34] At least some of these myths appear to be driven by the confusion over the word "radiation". Technically, radiation is any stream of elementary particles. The only thing in common between radiation emitted by wireless and gamma radiation arising from radioactive decay is that both are composed of photons. However, the energy of wireless radiation photons — the thing that determines their interactions with matter — is 10 orders of magnitude lower than for ionizing radiation and 6 orders of magnitude lower than for visible light. There is absolutely no reason to expect there will be similar health effects.

It is true that microwave-prepared food can be less healthy, as traditional forms of cooking such as baking reduce the fat content of food. Moreover, microwaved meals tend to be purchased in processed form rather than made from fresh ingredients. However, this has nothing to do with radiation of any kind. On the other hand, microwaving can be more healthy than traditional cooking, as vegetables preserve more of their vitamins and minerals.[35]

The nuclear magnetic resonance technique, widely used in chemical analysis, was further developed as an imaging technique for diagnostic medicine in the 1970s. However, the "nuclear" part of the name (which is still common in chemistry) is dropped for medical applications, partially because MRI is a little easier than NMRI, but not least because patients were afraid of the word "nuclear" in the procedure's name.[39] MRI procedures do not result in any ionizing radiation exposure. While a weakly radioactive tracer chemical may be injected into the patient, the MRI scanner itself uses no radioactive substances.