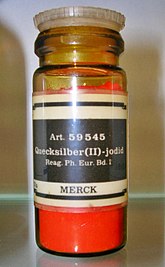 α-mercury(II) iodide: not the red mercury they were thinking of

This red Mercury might do quite a bit of damage if driven fast into a wall.

Red mercury is a mythical substance, supposedly possessing massive destructive power. It is sometimes referenced in pre-chemistry alchemical texts, though what substance or process it is a codeword for differs from text to text.

No credible evidence of the substance's existence has been put forward. However, there are theories that it was made up as a scare story in or after[note 1] the Cold War;

When an official spokesman says, "Red mercury doesn't exist; the whole thing is a bunch of malarkey," you know the conspiracy theorists will be out in force.

For example, for many years the crash of South African Airways Flight 295

off the coast of Mauritius in 1987 was blamed on its cargo of "red mercury" which the apartheid government of South Africa was smuggling in for their atomic weapons program. Even during the Truth & Reconciliation Commission in 1996, it was stated that:[1]

Red mercury may very well exist, in fact red mercury does exist, the contentious issue is whether it plays any role in the nuclear arms sphere. There is no doubt that red mercury exists, I can refer you to the original chemical articles on this particular form of mercury, and there have certainly been a number of unexplained deaths in people who've allegedly been linked to the red mercury industry, not least of which was Alan Kidger, but there is no evidence whatsoever that either plutonium or anything of that nature could have caused the Helderberg disaster.

There's no indication that "red mercury" is actually supposed to be a mercury compound. However…

α-Mercury(II) iodide (α-HgI2) is a red form of mercury that is very toxic but not explosive. Cinnabar is a naturally occurring red-coloured ore of mercury (mercuric sulfide) which, although toxic, has no known explosive properties. On the other hand, mercury fulminate (Hg(CNO)2) is a shock-sensitive explosive used in some types of ammunition cartridges, and mercury (II) thiocyanate (Hg(SCN)2) or "Pharaoh's Serpent" when burned expands into a mass of ash tentacles, similar to but more spectacular than the black snake fireworks that have largely replaced it for safety reasons. And the freaky-toxic dimethylmercury was actually considered as a rocket fuel in the 1950s, but the chemical companies who supplied test materials wouldn't touch the stuff. "Red mercury" is described as a "ballotechnic", a substance that produces immense pressure when ignited,[note 2] and therefore seems to combine properties of several of the above substances.

Wait, start over. What does this have to do with nukes?[edit]

The classical Teller-Ulam design of nuclear weapons isn't known in full detail outside government circles, but essentially it's known to work like this:

It's this multistage compression effect that triggers a large fission reaction in the sparkplug that allows a single thermonuclear weapon to wipe an entire metropolitan area and then some off the map in one explosion. The point of "red mercury" is that it's supposedly powerful enough to completely eliminate the need for a primary and make it possible to build a very small (like briefcase-sized) thermonuclear weapon. The problem with all this, of course, is that while it's not necessarily impossible to get that kind of power out of a chemical reaction, it's not that likely.

So is it real or not?[edit]

inventor of the neutron bomb, claimed it is, but it's not terribly rare for a hailed scientist to become a crackpot even in their own specialty, especially when said specialty is conducted outside the public view (see: Edward Teller

; in addition, Cohen, like Teller, was something of a wingnut anyway). As mentioned above, there are mercury compounds that are explosive, and then there's whatever mercury (II) thiocyanate is.[note 4]

The more likely scenario is that "red mercury" is either a code name for something else (maybe one of those polymer-bonded high explosives used to trigger the warhead primary) or a hoax made up to track and capture would-be nuclear arms traffickers.[note 5] The problem is trying to identify a class of substances that has both an extremely high energy density and a very fast ignition despite being strongly shock and fire insensitive,[note 6] and if the Wikipedia article on ballotechnics

is any indication, there's little to nothing in the open literature describing such compounds. In other words, if "red mercury" really existed, it would have to be a really exotic substance that not even its creators would understand well. That doesn't usually bode well for the likelihood of a substance's existence.

So… yeah. Probably no such thing. But you never know. It was first mentioned during the Cold War as a myth and that it could not be created or found.