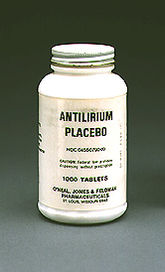 The placebo effect is a psychosomatic phenomenon in which symptoms of a disease or condition lessen — or even appear to be cured completely — from the patient being merely exposed to a treatment, as a result of the body releasing endorphins.[1] Believing that their condition will be improved, they will begin to feel better and perhaps identifiable symptoms may disappear, irrespective of whether the treatment has any chemical or pharmacological effect. Because of this, controlling for the placebo effect is an essential part of medicine. For example, sugar pills or saline solutions, which have no pharmacological properties, are commonly prescribed as placebo treatments to control for the effect the simple act of intervening in a patient's illness.

The placebo effect is quite a complex phenomenon. It is influenced by a multitude of things, including positive thought, reduced stress, the intensity or "drama" of the medical intervention, a patient's expectations of what the treatment can do, and the wider cultural meaning of medical treatment. A particularly interesting observation is how much these factors can be influenced subconsciously; a doctor merely telling someone a treatment will work may not produce such a dramatic effect if the doctor doesn't actually believe it too. Because of the complexity of issues surrounding what causes a sick patient to get "better", it's difficult to say if an individual was cured by a placebo effect, real treatment, regression to the mean or a complicated combination of all three. So, the placebo effect is best described as a statistical phenomenon, where prognosis improves for a certain percentage of patients simply exposed to a treatment of some kind.

However, as the placebo effect is powered by belief in a treatment and exposure to it, it can manifest in individuals to a certain extent. A homeopathic prescription of water containing a minute dilution of powdered oyster shell may bring some improvement to a patient who has total faith in the homeopathic method. A patient who is skeptical of homeopathy may experience a reduced effect or no effect at all, as demonstrated by James Randi when he regularly consumes massive overdoses of homeopathic sleeping pills on stage. If these two hypothetical patients begin to feel better anyway, the former would be likely to attribute it to the treatment while the latter would be likely to dismiss it as just feeling better anyway. This leads to selective reporting, and is why anecdotal evidence shouldn't be trusted over statistical data.

Expectations of what drugs and medical treatments can, and do, change over time. Often the efficacy of real drugs decreases when a new version is released, as people expect the new one to be better. New treatments, which are perceived to be more effective because they exploit new technologies induce a placebo effect in addition to their real effect and, sometimes, this can lead to an overestimate of their real efficacy over an existing treatment. This is why in controlled studies of new treatments, they are compared not with inactive placebos but the best effective treatment available (and not least because it is unethical to use placebos where a working treatment is known) and the experience between patients is minimised so that they genuinely cannot tell the difference between treatment A and treatment B.

It is an observed phenomenon that placebo drugs distributed in flashier packaging tend to produce a stronger reaction than their plain packaging counterparts.[4] There is also evidence that the placebo effect can work even if the person knows that it is a placebo, as observed in a study of patients with irritable bowel syndrome (IBS).[5] However, the statement issued to patients reads "placebo pills made of an inert substance, like sugar pills, that have been shown in clinical studies to produce significant improvement in IBS symptoms through mind-body self-healing processes" — which still creates an expectation of treatment despite being told there was no chemical reason that such treatment would help.

See the main article on this topic: Ethics

There are a number of ethical issues surrounding the wilful use of placebos as a treatment — known as placebopathy. Many casual complaints can be dealt with by inactive placebo treatments (involving a sugar pill and a reassuring visit to a doctor) and this would save a significant amount of time, money and lowers the risk of drug dependency and overdose. Yet, despite these potential benefits to willingly issuing placebos, it is not considered ethical in modern medicine. Firstly, placebopathy involves medical professions deceiving their patients, which is considered bad ethical practice, and secondly there is a risk in delaying the treatment of a real condition due to a doctor mistrusting or underestimating their patient's symptoms. If a patient complaining of a headache is given a sugar pill to placate it, and it turns out to be a serious condition that requires non-placebo treatment then at the very least this would be a serious lawsuit waiting to happen.

Conversely, some medications that have been prescribed have later turned out to be no more effective than inactive placebos, yet can be an effective treatment for psychosomatic conditions or short-term illnesses. Because any treatment tends to produce a better effect than no treatment at all (hence the need for placebo control in trials, see below) it could be considered unethical to stop this practice of effective placebopathy.

Oscillococcinum, a well-known homeopathic remedy that "works" by the placebo effect.

Because the placebo effect is so powerful, efficacy claims for medical treatments must be tested in an experiment that controls for this effect. This is usually achieved by running a double-blind test, where some patients receive the treatment being examined, and others get a placebo. Neither the patients or the administrators of the treatment know who is in which group. In order for the treatment to be proved useful, it must produce results that are better than the placebo at a statistically significant level. In practice the "placebo" is usually an existing treatment, as being better than an placebo isn't enough — a new treatment has to be better than the existing one! For example, in trials of keyhole surgery over conventional open heart surgery, elaborate schemes were undertaken to make patients all feel as if they had the same treatment — but all were treated for their condition, none received a full "fake" treatment that did nothing. Similarly, new pills would be compared with the existing treatments they aim to replace, not necessarily sugar pills or more "powerful" (but more restricted) drugs.

Placebo treatments can often be quite difficult to design, but are still possible. As mentioned above, placebo surgeries have been performed using quite elaborate theatre, and often the precise wording that a doctor must use to describe a treatment to a patient is strictly controlled. Such treatments can be used to test not just efficacy, but the explanations offered by alternative medicine practitioners. A placebo treatment to test acupuncture, for example, could be designed to test claims about meridian lines would involve sticking the needles into a patient but in more randomised areas rather than the specific places the technique claims are "special". A second placebo treatment could test the effect of needles by changing the depth which they penetrate into the skin — acupuncture needles often go deeper than you think, while placebo needles penetrate only the top layer of the skin. Thirdly the effect of a visit to a practitioner can be controlled for by using entirely "sham" needles which prick the skin, causing indistinguishable pain sensations, but otherwise don't penetrate or cause any lasting effect. These three methods combine to test three separate areas whereby an alternative medicine can work.

Quacks who push woo treatments rely on the placebo effect when arguing that their "cures" have an effect. This is exactly why medical tests need to pit a drug against a placebo: anything will usually perform better than nothing. Often, proponents of alternative medicine will reject placebo controlled experiments for any number of excuses. For example, many homopathic practitioners assert that treatments must be assigned individually and so are unsuited to the format of a randomised controlled trial. Yet, such things can be overcome by simply exposing the patient to everything about the treatment, including this individual treatment "design", and simply swapping the medication at the last moment, unknown to both the patient and practitioner. This sort of assertion is common in alternative medicine, but is obviously at odds with the mass-produced remedies that are sold to the public. Such trials have been done (very rarely does the alternative medicine world foot the bill for these), and they invariably come up negative.

Studies can be undermined by an insufficiently similar placebo, as small variations can create big differences expectations among patients. The classic example of this is pills versus capsules. Western patients expect (and thus tend to experience) more dramatic effects from medicine delivered in capsule form[6]. Trials for non medicine treatments typically refer to the equivalent control as a "sham" rather than a placebo. Sham treatments, particularly ones that involve a great deal of human contact tend to have larger effects than pill-based placebos.

The strangeness of the placebo effect[edit]

The power of the placebo effect produces many strange and interesting quirks. These indicate that the placebo effect may well be more than mere "mind over matter", and stem from what is known as a complex intervention. This is where any given treatment consists of not just the medicine issued, but the bedside manner of the doctor, how the treatment is described and sold, and how society and environment shape our expectations of what a treatment can and cannot do. Many of these examples and their ramifications are discussed in slightly more detail in Ben Goldacre's book Bad Science.

The placebo effect has a somewhat less well-known, slightly evil cousin; the nocebo effect.[20][21] This occurs when an individual's expectation of negative effects generates or aggravates those effects, much like a hypochondriac developing symptoms because they are actively watching for something to go wrong with their health. This is particularly important when looking at side-effects of drugs, as a placebo pill can generate the negative side-effects associated with drugs, and in some cases, specific side-effects can be increased by mentioning them prominently or adding an extra layer of suggestion, such as complex consent forms.[22]

For ethical reasons the nocebo effect has not been well studied directly, but it is probably behind the witch doctor's ability to cause illness in those people he curses. It has also been used to explain unusual phenomenon like the culture-bound syndrome

SUNDS (Sudden Unexpected Nocturnal Death Syndrome) in immigrants from the Hmong people of Laos; belief in angry supernatural forces combined with the phenomenon of sleep paralysis to convince sufferers that they were under attack, leading to extremely high levels of stress which could trigger dormant heart defects.[23] As a side note, these same deaths were what inspired film director Wes Craven to create the fictional dream-using serial killer Freddy Krueger.

A false placebo is a non-placebo factor that appears to cause an improvement of a disease. False placebos differ from actual placebos in that they occur regardless of whether the patient is treated or not. False placebos are the lesser-known things controlled for in the placebo arms of clinical trials. Some examples of false placebos include misdiagnosis, regression to the mean, and spontaneous regression.

Side effects as evidence of effectiveness[edit]

A kind of placebo can be found when the treatments have actual side effects: the practitioner explains them as signs that the treatment is working. For example, if the patient gets nausea from a pH woo treatment, the practitioner can explain that this is a "healing crisis",[24] a kind of an imagined Jarisch–Herxheimer reaction

. A similar effect has been found even for legitimate medications: an antimalarial with worse side effects was interpreted as being more effective by patients.[25]