The Myers-Briggs Type Indicator (MBTI) is an alleged assessment of one's personality type - whatever that means. It aims to classify how individuals view the world through a questionnaire, categorizing people based on four different dichotomies. It was developed by a mother-and-daughter team (Katharine Cook Briggs and Isabel Briggs Myers) who had no formal education in any subject-related fields but had a personal interest in Carl Jung's Personality Types and wanted to make them accessible to a wide audience as a tool for self-discovery. Despite its widespread use in business (particularly in human resources departments), it is widely recognized as pseudoscience among reputable psychologists. [3][4]

In personality research, it only plays an anecdotal role - for a variety of reasons. One drawback lies in the origins of MBTI, since from the time of its Jungian roots (Psychological Types by C. G. Jung, 1921), the first MBTI Handbook (1944) and the MBTI Manual (1962), the scientific field of psychology in general advanced considerably. Other models of personality have been proposed and developed, which by design and purpose satisfy more scientific criteria than the antiquated Myers-Briggs model. MBTI's popularity derives mainly from its relative simplicity and appeal, from the commercial profitability for its practitioners and from the self-amplifying effect of its own propagation. Several studies have linked the MBTI dichotomies to more accepted personality models like the Big5-based NEO PI-R (a 5-factor model with 5 subscales each),[5] which showed strong correlations between the two, as have other studies. Even Big 5 have been shown to not necessarily hold up well in non-western cultures[6]. 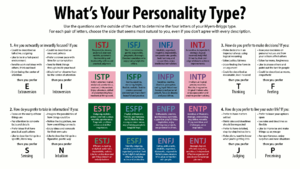 A chart with descriptions of each Myers-Briggs personality types

In contrast to trait-based personality theories which assume a continuous, normal distribution around an expectancy value, MBTI, like other type theories (Keirsey Temperament Sorter, Socionics, etc.) postulates the existence of 16 distinct personality types. This hypothesis has the weakest empirical support, and is one of the major points of legitimate criticism. There is absolutely no support for it from any datasets, although there were some attempts at filtering large data sets with advanced statistical techniques, there were no evidence for a so-called bimodal distribution found.[7]

This scale is referred to as the "attitudes." Unlike the usual form of "extravert" and "introvert," these have a very specific definition based on how a person reacts to action or reflection. Carl Jung proposed that one's psychic energy was either directed outwards (extraversion) or inwards (introversion).

These are the "information gathering functions," and are fairly self-explanatory. S prefers to look at the world and describe what they sense while N people are more concerned with the meaning. For example, “the street has many tall brown houses and is crowded” (S) versus “this is a shopping street with historical houses” (N). Because of this, the temperament of S is separated by the Judging-Perceiving aspect while that of N is separated by Thinking-Feeling.

This dichotomy is the "judging functions," based around how a person, is in theory more likely to if judged to be Perceiving, or will if judged to be Judging; make decisions. T will rely on any factual information itself more, while F relies more on how they feel about the information in context, including rhetoric. Thinkers are not more logical, and Feelers are not more empathic. However, males prefer to answer as Thinkers beyond any reasonable margin of error while females do as Feelers; making this the exceptional dichotomy on a generally gender-neutral survey.

Combining these four scales comes up with 16 different personality types: INTP, ESTJ, etc. The scales, except for the last, are nominally based on Jung's theory of personality (the last was somewhat arbitrarily added by Myers and Briggs).

Many skeptics consider the Myers-Briggs to be pseudoscience, since no science based evidence has been offered for the existence of these categories except for the introversion-extroversion scale,[note 1] although many find it useful as a wholly subjective frame of reference or categorization. Then again, there are also those who find the categorizations in Transactional Analysis, William Strauss and Neil Howe's generational types, the left-right political spectrum, dividing popular culture by decade (the "Sixties," the "Seventies," etc.) useful methods of systematizing too, despite their lack of scientific nature. As with any subjective construct, your mileage may vary.

Though the MBTI is popular in schools and businesses, it's disfavored by many in the psychological community for its low reliability and lack of external validity. The most common personality assessment tools used by psychologists are the MMPI-2 or the MCMI-III.

A comedic aspect is the placement of real life personalities, e.g. John F. Kennedy being an introvert on one scale,[8] and listed alongside Sarah Palin on another.[note 2]

It should be mentioned that using a formal psychological test as part of the hiring procedure is viewed as a "medical examination" and therefore illegal in the United States under the ADA per Karraker v. Rent-A-Center Inc.[9][10]. Use of the MMPI (or one similar to it) is definitely illegal and there are serious questions regarding using the MBTI:

"One large human resource consulting firm uses the MBTI and a 360-degree behavioral style assessment in its hiring process, no doubt not realizing that this use is illegal." [11]

The Myers & Briggs Foundation's own website warns "It is unethical and in many cases illegal to require job applicants to take the Indicator if the results will be used to screen out applicants."[12]

The Equal Employment Opportunity Commission (EEOC) requires that every factor used to make hiring decisions be job-related and “properly validated for the positions and purposes for which they are used.” which all personality tests fail and are therefor of questionable legality.[13]

After taking the test, many individuals are astonished by the extent to which their personality type description actually fits their life. This is Forer effect, the natural tendency of people to assign detail and specific meaning to generalized statements or events. There's also the fact that they were the ones who took the test and answered questions about their personality – why would they not agree with the results if they provided them?