Filicide is the despicable act of murdering your own child(ren). It is always wrong, no matter how "difficult" your child is.[citation NOT needed]

Most filicide perpetrators are mentally healthy.[2]

Experts have identified 5 reasons why adults may kill their own children:[3][4]

Some of these overlap with the reasons women induce abortions, though killing a sentient child is obviously far worse.

Some parents kill female infants because they only want male babies. This may be especially prevalent in societies in which male (but not female) children are expected to look after their aging parents, or in which a dowry is necessary for marriage.[5]

When a parent murders a non-disabled child, they may be called "pure evil" or a "monster."[1][7] (And they'll deserve it.)

But when the child is disabled, suddenly people trip over themselves in order to justify it.

Media outlets choose to focus on the children's disabilities, and the things they were unable to do (e.g. speaking), or things they did (like screaming or hitting, which obviously non-disabled children never do). The children are portrayed as burdens on their parents, as a way of explaining why their death was logical.[8][9] It may even be called a "mercy killing," "final act of love," "loving sacrifice," or some other euphemism.[10] Other people may be told not to judge the murderer.[11][12]

Murderers of disabled children may receive sympathy to the point that people argue for a light sentence.[13] For example, the two killers of Alex Spourdalakis were only sentenced for 3 years each, despite the horrific brutality of his murder,[1] and the mother of 14-year-old Annie Marshall (who had been shut in a room and slowly starved to death), received only 5 years in prison.[14]

While the murderer may claim it was an act of altruism, they may have a history of hating the child's disability, suggesting that the act of cruelty was actually because they didn't want the child.

The Disability Day of Mourning keeps a long list of disabled people murdered by their families.[15]

Autism is a heavily stigmatized disability, and not all parents love their autistic children. Frighteningly, autistic children in particular are more likely to be victims of murder-suicide.[17] 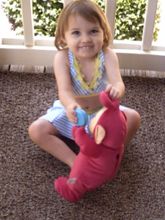 Katie McCarron's family wants her photos shared so people can know what a happy child she was. Her grandfather reported that her interests included singing, going to the zoo, dancing, visiting the mall, dressing up, and playing outside

Here is an incomplete list of autistic children and young people who were killed.

Many of them are deeply missed by friends and family members, who said they were loving and a joy to have in their lives.[34][35][36][37] None of these children and young people deserved death.[citation NOT needed]

Some members of the autism rights movement have raised concerns that sympathetic media portrayals could be linked to copycat crimes.[38] For example, 4 days after Autism Speaks released a video in which a mother discussed contemplating murder-suicide, 3-year-old autistic Katie McCarron was murdered by her mother.[11][39]

Reactions to the murder of kids with disabilities[edit]

Some autistic people, such as writer Mel Baggs, have asked that their death not be treated as justifiable if they are murdered.[40]

However, this doesn't account for the existence of wealthy murderers, or the existence of murderers who reject help from others.[1][43] Advocates for autistic people have argued that claiming services will stop murders sounds awfully similar to using children's lives as a bargaining chip.[44]

If anti-vaxxers think that autism has already "stolen" their child and taken away their soul[46][note 1], then murder must not be so bad, since the victim wasn't even a real person.[47]

Members of anti-autism communities have spoken up for murderers and would-be murderers on social media, telling people to "walk in [the murderer's] shoes" before judging them.[48]

Understandably, this shocked people. Decent parents of disabled children expressed horror at the idea that it is somehow "normal" to want to kill a child.[49][50] Autistics, including autistic abuse survivors, have asked why no one ever thinks to walk in their shoes, pointing out how hard it is to be an autistic child whose parent hates autism.[51] "I could have been [attempted murder victim] Issy Stapleton," noted autistic writer Kassiane Sibley, whose violent mother threw her against a wall hard enough to dent her skull.[52]

The disability day of mourning on March 1 honors disabled people killed by caregivers.

Members of the autism rights movement have pointed out that the common denominator is likely the horrible belief that children are better off dead than disabled.[54] Some murderers have refused to accept their children's disabilities, and have put them through intensive behavior modification or biomedical "treatments" before deciding to kill them.[55] "The truth is, Kelli didn’t want Issy anymore. She made it look like it was unselfish and loving, but it was not unselfish and loving," said Eileen Stapleton, grandmother of murder attempt survivor Issy Stapleton.[56]

On March 1, many disabled advocates observe the Disability Day of Mourning.