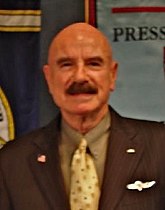 George Gordon Battle Liddy (1930–2021), usually shortened to G. Gordon Liddy or simply Gordon Liddy, was "the leader of a third-rate burglary ring",[2] and was a conservative talk radio host and ex-convict[3]. A former FBI agent, he began his political career as an operative in Richard Nixon's 1972 election campaign as a member of the Committee to Re-Elect the President (CREEP). During his time there, he was known as a top "ratfucker" and one of the Watergate "plumbers." One of his most notable acts of ratfucking was breaking in to Daniel Ellsberg's (the Pentagon Papers guy) psychiatrist's office to launch a smear campaign against Ellsberg.

Liddy was responsible for concocting "Operation Gemstone," or the "Gemstone Plans," along with Tricky Dick's Attorney General John Mitchell, Counsel John Dean, and HR Haldeman aide Jeb Magruder. This was the plan to break in to the Watergate hotel and wiretap the Democratic National Committee. Even the other White House insiders viewed Liddy as a little unhinged.[4] While serving in the New York DA's office in the '60s, Liddy fired a gun during a trial, which led to his dismissal. He also bragged about his party trick of burning his hand over an open flame to prove he didn't mind the pain.[5]

Liddy had cooked up a number of cockamamie schemes, including luring Democratic candidates onto a boat with prostitutes to get pictures of them in compromising, er, positions and shipping anti-war protesters off to Mexico. He was the head of the plumbers unit, comprising him, E. Howard Hunt, and a band of Cubans with CIA training. Liddy never actually broke into the Watergate, but directed the operation from across the street. The rest of the plumbers were discovered as that CIA training failed them — one of them had left the tape they used to keep a lock open on the door and it was discovered by the security guard.

He served over four years in prison until Jimmy Carter commuted his sentence. He had a role as a bit actor in TV shows like MacGyver until he finally got his own radio show in the '90s. He also served as the inspiration for a superhero, something few other pundits/convicted felons can claim. Unfortunately, that superhero, Edward "The Comedian" Blake from Alan Moore's Watchmen,[6][7], was a sociopathic murderer, but it probably looks good on a résumé anyway. He also had a brief acting career, appearing in the 1990 action film Street Asylum, in which he is whipped by Playboy playmate Roberta Vasquez in dominatrix gear.[8]

On his radio show, he peddled nonsense about guns, racism, xenophobia, gold, and general wingnuttery. Occasionally, he appeared as a "correspondent" on Faux Noise. He had also lent his name (if that means anything) to the birther cause.[9] He also really hated Mooooslims and occasionally made allusions to FEMA concentration camps that Barack HUSSEIN Obama was going to lock white people up in. This will no doubt coincide with the construction of the NAFTA Superhighway and eventual creation of a North American Union.[10] Joseph Farah sometimes filled in for him when he needed a day off from his rabid ranting.

G. was a Catholic but was sometimes mistaken for Jewish because of his over-the-top support of Israel and all things Jewish. He wasn't one to miss the Old, White Male conservative trend of going from hating Jews because they "killed Jesus" to being very pro-Israel because "the enemy of my enemy isn't as bad as my enemy", or something like that.

Liddy is proof that anyone can rise to the top in America, even violently racist criminal gun nuts.