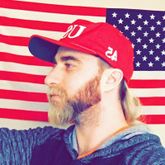 or the nickname for a couple in RWBY.

Anthime "Tim" Gionet (1987–), better known as Baked Alaska or Tim Treadstone, is an alt-right media personality and troll.[1] He was banned from Twitter in 2017.[2][3] He was also banned from YouTube in October 2020 due to a video he posted where he harassed store workers over a requirement to wear face masks.[4][5]

His first jobs were in the record industry, followed by a stint at Buzzfeed.[6] Online, prior to the Buzzfeed stint, he began his infamous career at the short-lived short-form video hosting site Vine

, where he posted "parody" rap videos and filmed "pranks" that included trashing grocery stores and harassing store employees with racist remarks.[7] Embracing the sort of clickbait style that Buzzfeed was notorious for,[8] Gionet's politics started radicalizing online, initially by posting "ironic" Nazi "jokes" for the clicks. Later, he left Buzzfeed in late 2016 to become the tour manager of fellow alt-right shithead Milo Yiannopoulos, and started fully embracing racist rhetoric and Donald Trump propaganda. Ultimately, this accumulated in Gionet being radicalized enough to storm the Capitol with other neo-Nazis on January 6 2021.[7] Gionet's tale, perhaps, serves as a cautionary warning of the potential real-world consequences of being an edgelord troll.

He used to be a rapper, then went to work for BuzzFeed. He was previously a libertarian who supported Black Lives Matter. Then he became a Donald Trump supporter. According to himself, the ideological shift was influenced by a "politically correct" atmosphere while working at BuzzFeed. As an example, he cited being rebuffed for calling Justin Bieber his "spirit animal".[9] His nickname "Baked Alaska" is derived from the fact he is from Alaska and apparently smokes weed a lot.[10]

Gionet is infamous for tweeting about Jews.[11][12] For example, Gionet is woke on the "Jewish Question":[13]

I was JQ'd long ago — pay attention!

Jews do control the news, apparently I can't even say the word Jews without him crying about it lol

45th President of the USA

As a stopped clock, it seems that Baked Alaska supported Black Lives Matter ... in 2014:

I dropped my new video today, but there's more important things going on in the world we need justice fam! #BlackLivesMatter #EricGarner[17]

Despite previously being Milo Yiannopoulos's "Dangerous Faggot Tour" manager,[19] Gionet is disowned and criticized by Yiannopoulos:

He is becoming a laughing stock and that reflects badly on me. .... [He] has no news judgment or understanding of what’s dangerous (thinks tweets about Jews are just fine). .... He seems more interested in his career as an obscure Twitter personality than my tour manager.[1]

Gionet is widely known for his various gaffes and attempts at self-deprecating humor. He has described himself as the "undisputed king of the self-own"[20] and is generally expected to be brutally humiliated on a daily basis.[21] When challenged for spouting an obviously spurious description of United States history, he replied that he was home schooled and the subject was never taught.[22] He once solicited "music producers in LA that aren't cucks"[23] and pretended to have a girlfriend.[24]

His attendance at the Unite the Right rally in Charlottesville is notable for an incident where he was pepper-sprayed in the face (possibly by himself).[25] After this, a video went viral of him yelling for milk to be poured on his face. Milk was, in fact, poured on his face on camera.[26][27]

For a brief period after getting banned from Twitter, it looked like he might've been dropping the whole "being a Nazi" thing.[28] He claimed to have "left the alt-right", and started supporting Democratic presidential candidate Andrew Yang. As part of his support for Yang, he created a rather embarrassing music video supporting his campaign.[29][28][30] His old fans weren't happy. One responded, "Antifa you guys can have this one".[10] Anyway, he quickly ditched the rebranding in favor of trolling anti-ICE protesters and (allegedly) vandalizing a Hanukkah display.[31][32]

Gionet almost got arrested over the October 2020 incident where he harassed some store employees over the store requirement for him to wear face masks.[5]

In December 2020, having learned no lessons from the previous incident, he actually was arrested. Reportedly, he was asked to leave a bar in Scottsdale, Arizona due to some filming that he and his friends were doing there making people uncomfortable. Outside the bar, Gionet got into a confrontation with the bar's bouncer, yelling homophobic and derogatory remarks at him. Ultimately, this ruckus culminated in Gionet blasting pepper spray in the bouncer's face.[33] For this, he was convicted of misdemeanor charges of assault, disorderly conduct, and criminal trespass, earning him 30 days in jail on January 13, 2022.[34]

2021 Storming of the U.S. Capitol Building[edit]

Gionet and his fellow-Nazi Nick Fuentes both participated to different extents in the 2021 storming of the United States Capitol Building that was incited by Donald Trump. Each of them separately livestreamed the destruction and theft that occurred.[35] Both were banned from the streaming platform DLive for their involvement.[36]

In a marvelous example of self-own, the United States Federal Bureau of Investigation is using Gionet's Capitol riot video to track down and prosecute other rioters.[37]

Arizona prosecutors charge that Gionet violated terms of his December 2020 arrest in Scottsdale, Arizona by leaving the state to participate in the U.S. Capitol riot, and filed charges on 8 January.[38][39] On January 15, 2021, Gionet was arrested in Houston for his participation in the Capitol riots, and charged with two federal crimes.[40]

As of May 2022, Gionet was expected to take a plea deal in which he would have merely plead guilty to "a single count of parading, demonstrating, or picketing in the Capitol, a class B misdemeanor with a max sentence of 6 months in prison", according to Zoe Tillman of Buzzfeed News.[41] However, he quickly fucked this up after he declared his innocence during the hearing instead.[42][43] He apparently received a second go at a plea deal after this embarrassment, and a sentencing hearing was scheduled for January 12, 2023.[44][45]