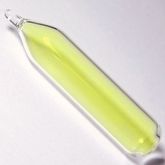 A fart in a bottle Fluorine in gaseous form.

Fluorine is the element of atomic number 9, the lightest of the halogens. Fluorine is an interesting element - it's extremely reactive, and it explodes a lot (in the right circumstances). It could be in your home, too! But in the slightly less dangerous form Teflon.

The properties of fluorine depend very much on which kind of compound it is a part of.

Pure fluorine is a greenish-yellow, extremely reactive, toxic gas.[1] Fluorine is incredibly reactive because its electronegativity is highest of all elements: its outermost electron shell has only a single hole in it, and it loves to pull any other electrons it can lay its hands on into said hole.[2]

In covalent compounds, fluorine clings like a mofo to practically any molecule you bond it to. Its atomic radius is rather small, and its bond to carbon

is "the strongest in organic chemistry". As a result, it can substitute hydrogen in organic compounds to form covalent organofluorine compounds, which are less reactive. This feature is what makes Teflon (polytetrafluoroethylene) nicely slippery and unreactive. Higher halogens, such as chlorine, are much less well-behaved. Light fluorocarbons are inert liquids and gases, useful as refrigerants. Fully fluorinated covalent fluorides, such as sulfur hexafluoride (SF6), are also very unreactive, and SF6 is used for example to fill electrical transformers. The chemical industry likes fluorine because it makes nasty things like uranium much easier to work with: uranium hexafluoride is not a salt, like one would expect from a simple ionic compound, but a volatile, easily sublimed solid.

In pharmaceuticals, substitution of hydrogen with fluorine is particularly useful because it can block enzymes from digesting the molecule, which slows down its elimination from the body and increases potency. Furthermore, its electronegativity can be useful in its own right.

Fluorine can do neat tricks like making compounds with the heavier noble gases argon, krypton and xenon; possibly radon, but it doesn't seem like anyone would want to try that one because radon is radioactive.

Fluorine readily forms ionic fluoride salts, which contain the fluoride ion (F-), for example sodium fluoride (NaF). They are moderately toxic if ingested in sufficiently large quantities, but are otherwise as boring as regular ionic salts. Fluoride salts are used in water fluoridation.

Fluorine, in the form of salts such as sodium fluoride, is an essential component in water fluoridation, which some conspiracy theorists say is a plot to poison us all. In pharmaceuticals, organofluorines are used because they're less reactive. But, the same nutters nevertheless bring them up, for example fluoxetine - which contains no free fluoride.