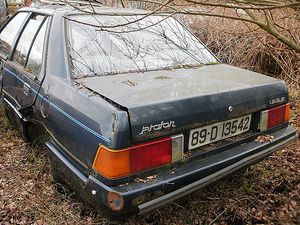 A proton is a positively charged subatomic particle found in the nuclei of atoms. It has a mass of 1.0073 atomic mass units (amu) and along with the neutron, makes up the vast, vast majority of the mass of an atom - yet only a tiny fraction of the physical space. The number of protons in the nucleus is characteristic of a particular element.

Protons consist of three quarks, making them baryons. Two of these are "up" quarks and one is "down". The +2/3 electrical charge of the two up quark and the -1/3 electrical charge of the lone down quark add up to +1 elementary charge for the proton. These quarks are held together by the strong force, a highly powerful attractive force that only extends as far as the nucleus of the atom - which is represented by particles called gluons. With this, one begins to see why particle physics and botany have a lot in common.

The "proton" is a key concept in the world of chemistry, particularly acidity. An acid is something with a lot of "free" protons lying around in solution, while a base (the opposite of an acid) mops up these additional "free" protons and reduces their concentration.[note 1] The term "free" here is placed in quotes because the protons aren't actually free as in hanging around completely naked; such a situation would be extremely unstable. They are usually chemically bonded to other molecules present, like the solvent. In water, the protons chemically bond to H2O to form H3O(+).

As any high-school physics or chemistry student knows, protons are red.

In the alternate reality of extreme parodist Sisyphus, protons are actually demons incarnate - while orbiting electrons are angels. This view was taken as serious by many bloggers and readers, and confusion over whether Sisyphus was real or parody (or even if people out there genuinely hold similar views ) remains to this day.

In the alternate reality of some Malaysian politicians, a Proton is a huge national success story in the Malaysian automotive industry, building high quality, innovative cars that put the country on the world map, making the population of the left-hand drive world green with envy that the chance to own such a fine brand of automobile is denied them.