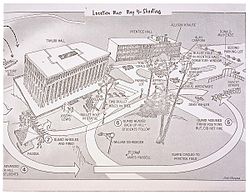 Kent State is the old name for Kent State University, a division of the University System of Ohio located in Kent, Ohio. But that's not why it's famous.

On a lovely spring day in the early seventies, May 4, 1970, to be exact, protesters against the Nixon administration's expansion of the Vietnam War into neighboring Cambodia were confronted by members of the Ohio National Guard. Since the Guard had guns and the students only had rocks and words, tragedy ensued. Four young people—Jeffrey Miller, Allison Krause, William Schroeder, and Sandra Scheuer—were killed that day. Two were protesters, and two were simply walking from one class to another.[1] One of the murdered students was actually a ROTC member; he was the only one of the four for whom Richard Nixon bothered to personally call the parents.

The state of Ohio then had the chutzpah to press charges—not against the Ohio National Guardsmen, but against 25 other students involved in the protests, known as the Kent 25. Most of the charges were eventually dropped.[2][3]

In yet another example of the Silent Majority keeping it classy, bumper stickers reading "Army 4, Kent State 0" appeared; union construction workers in New York City mobilized by the local AFL-CIO leadership to hold a pro-Vietnam War rally, rioted and attacked antiwar protesters who had gathered to remember the Kent State dead,[4] and Nixon and his White House general counsel, Chuck Colson, then invited the leaders of the construction worker riot for a warm welcome and a "well done" at the White House. Nixon appointed the local Construction Trades union leader and instigator of the riot, Peter Brennan, as Secretary of Labor during his second term.

Two of the members of the band Devo were students at Kent State at the time of the murders (Mark Mothersbaugh and Jerry Casale), and a third (Bob Mothersbaugh) was on campus at the time.[5] The three were witnesses or participants to the preceding student unrest, and witnesses to the murders.[5] The murders were profoundly influential on the three members, and led to their formation of Devo, as well as to their using the term devolution as a reference to how they saw humanity going.[6] According to Casale, the Kent State murders were also one of the instigators of punk rock.[7]