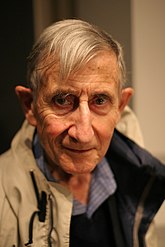 Freeman John Dyson (born 1923) is a renowned British physicist and mathematician. He has worked on quantum field theory, astronomy, solid-state physics, and nuclear engineering. He has received numerous awards, but never a Nobel. Physicist Steven Weinberg claims Dyson was "fleeced" by the Nobel commission. He led the design team for the TRIGA nuclear reactor, which is in widespread use today, and is also known for his nuclear disarmament advocacy. He is currently the president of the Space Studies Institute.

Unfortunately, he is also an occasional crank, and in another life would have succumbed to the Nobel disease.

Concepts in science and futurology[edit]

Dyson has developed many concepts in scientific and futurist circles:

Dyson considers himself a non-denominational Christian and believes in non-overlapping magisteria. Some of the material he has written on metaphysics, though, is much less Christian than it is reminiscent of various theories of quantum consciousness, panentheism, panpsychism, and other sorts of New Agey science woo.

Dyson has succumbed to old age crank syndrome as well, becoming a global warming denier.[2] However, he hasn't done any actual criticizing of climate science besides dismissing the models as flawed and saying that if it is a real problem, we can easily cook up some super-tree to suck the carbon dioxide out of the air. Dyson's support for deniers seems to be the result of wanting to stick it to the scientific man:

So… yeah, thanks for that.