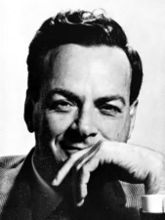 There was a very fine man of science.

Richard Phillips Feynman (May 11, 1918 – February 15, 1988) was an American theoretical physicist. A man of formidable mathematical faculty and physical insight, he became one of the best and brightest practitioners of quantum mechanics. In fact, he worked on all four fundamental interactions of nature, electromagnetic, weak and strong nuclear, and gravitational. For his original work on quantum electrodynamics, Feynman was a joint recipient of the Nobel Prize in Physics in 1965, together with Julian Schwinger and Sin-Itiro Tomonaga.[2] He is well-known for his colorful explanations of concepts in physics and for playing the bongo drums.[3]

Born to a lower middle class family in Rock Faraway Far Rockaway, New York, his success later in life is thanks in no small part to his upbringing. Since he was a child, his father cultivated a sense of curiosity and taught him, among many other things, that knowledge does not come from authority and that knowing the name of something is not the same as actually knowing what it is. Furthermore, his parents were determined to give him the best possible education. Later in life, Feynman tried the same parental approach towards his own children, encouraging them to be inquisitive and steering them towards the STEM fields. Unfortunately, it worked for his son, Carl, but not for his (adopted) daughter, Michelle. The child's personality likely plays a role.[1] The moral of the story here is a career in STEM is not for everybody and parents should be aware of that.

He did exceptionally well in school. Impressed with Feynman's abilities, a high school teacher told him about the principle of least action,[note 1] something that would later play a crucial role in Feynman's career as a physicist.[1] He attended the Massachusetts Institute of Technology (MIT) as an undergraduate before pursuing a doctoral degree at Princeton University. As a graduate student, Feynman and his supervisor, John Archibald Wheeler, investigated the links between causality and electrodynamics. The result is the Feynman-Wheeler absorber theory, published after the end of World War II.[4] Wheeler and Feynman decided that due to wartime conditions, it was best for Feynman to concentrate on obtaining his PhD. For his doctoral dissertation published in 1942, Richard Feynman created the path integral formulation of quantum mechanics, starting from the Lagrangian formalism laid out by Paul Dirac in 1932. In his own dissertation, submitted in 1925, Dirac introduced the Hamiltonian formalism, which he showed to be fully equivalent to the matrix mechanics of Max Born, Pascual Jordan, Wolfgang Pauli, and Werner Heisenberg, and the wave mechanics of Erwin Schrödinger.[5] For a very long time, the Lagrangian formalism was neglected as most physicists stuck to one of the above approaches to quantum theory. After showing that, not surprisingly, the Lagrangian formalism reproduces Schrödinger's equation (up to a constant of integration),[4] Feynman realized that the Lagrangian formalism provided a number of crucial insights into the nature of the quantum world. In classical mechanics, Lagrange's formulation yields equations of motion whose solutions specify a unique trajectory for the object, the one demanded by Newton's laws.[1] In classical optics, Lagrange's formulation yields the path of a beam of light through a material medium if its index of refraction is known. In the quantum regime, a particle tries out all possible trajectory, each with is own probability determined by a set of rules devised by Feynman. This is the essence of the path integral formulation of quantum mechanics.[4] Feynman later used this to develop his own version of the quantum theory of electromagnetism, better known as quantum electrodynamics, which he completed in 1948. During this process, he developed a way to understand the behavior of subatomic particles using pictorial tools that later became known as Feynman diagrams.[4]

In 1949, Freeman Dyson demonstrated that all three, or rather, two, formulations of quantum electrodynamics are equivalent[1] Schwinger and Tomonaga had the same approach using a more traditional mathematical route. However, many physicists were skeptical at first, since Feynman did not give a rigorous derivation of his results. It did not help that he seemed to have violated everyone's favorite principles. Most notably, Niels Bohr thought Feynman had reintroduced classical trajectories back into quantum mechanics.[1] Dyson saved the day once again by obtaining Feynman's methods from the more traditional operator-based approach to quantum mechanics. Strictly speaking, though, creating a new version of quantum mechanics is not necessary, not least because existing formulations could be used to extract results that agreed well with experiments. However, things got complicated quickly when physicists studied the quantum theory of electromagnetic radiation and how it interacted with matter. Feynman's version quickly became the vogue, being easier to handle and more insightful than the more traditional approach.[6] Processes could now be more easily visualized, identified and calculated. For many physicists, Feynman's path-integral and diagrammatic approach liberated them from the "seemingly endless, gloomy, turgid mass" that was the old formalism. Not only that, it paved the way for further developments in high-energy physics, involving fields and interactions more complicated than electromagnetism.[6][4]

See the main article on this topic: Manhattan Project

Richard Feynman was one of the physicists hand-picked by J. Robert Oppenheimer for the Manhattan Project, the research and development of the first nuclear weapons. His uncanny knowledge of mathematical tricks were of immense value, as was his ability to quickly understand how electrical computers worked. On one occasion, he was credited with the discovery of a potentially deadly safety issue that people overlooked.[4] His exceptional ability to explain complicated physics saved many workers, who did not really understand the dangers of radioactive materials, from disaster. These people were kept in the dark by the military for security reasons. But Oppenheimer put his foot down and sent Feynman over, telling him to cut his way through the bureaucratic red tapes by saying, "Los Alamos cannot accept responsibility if..." It worked like a charm.[1] He exposed an early instance of security theater at the Manhattan Project, where researchers kept classified papers in combination-locked file drawers with a number of vulnerabilities. The "solution" was not to provide more secure document storage, but to "keep Feynman away from your file cabinet."

During the post-war decades, after publishing his Nobel Prize-winning works on quantum electrodynamics, Feynman explored the physics of superfluidity (an example being supercooled liquid helium), and elementary particles. After a series of spells in various faculties, including one in Brazil, he settled in the California Institute of Technology (Caltech). Despite his prolific contributions, Feynman wrote only 37 research papers during his entire career. Much of his work were not published in a formal manner; he simply studied physics for the fun of it. From the late 1950s to the early 1960s, Feynman conducted his own research on gravitation. He managed to derive Einstein's field equations of general relativity by considering the appropriate quantum interactions. He also investigated mathematical models of relativistic stars and gravitational radiation.[note 2] But he ran into a brick wall after that.[1] Remarkably, Feynman achieved all this while working on his own version of the theory of weak nuclear interactions but was characteristically not dismayed when he learned that others, such as Murray Gell-Mann[note 3], had covered the same grounds.[1]

In addition to his work in theoretical physics, Feynman is credited with the concept and early exploration of quantum computing, and publicly envisioning nanotechnology, creation of devices at the molecular scale. He held the Richard Chace Tolman professorship in theoretical physics at the California Institute of Technology (Caltech).[7]

Feynman was a member of the panel that investigated the Space Shuttle Challenger disaster.[1][8][4]

In Surely You're Joking, Mr. Feynman!, Feynman spends a chapter explaining in detail how he learned from a "master" to pick up women; we wish he were joking. Basically, he thinks you should act like a pick-up artist and rely heavily on negging. In the end of this chapter, he stresses that "...no matter how effective the lesson was, [he] didn't enjoy doing it that way. But it was interesting to know that things worked much differently from how [he] was brought up." [9]Never known to be a romantic, "Dick", as he is known in this chapter, follows his inquisitive nature. His methods are, of course, inadvisable - telling someone "You. . . are worse than a WHORE" [10] will never be right, no matter how free-spirited or intelligent one is.

Feynman was a keen and influential popularizer of physics in both his books and lectures, notably a seminal 1959 talk on top-down nanotechnology called "There's Plenty of Room at the Bottom" and The Feynman Lectures on Physics, a three-volume set which has become a classic text. Transcripts are okay, but you need to see the actual videos to see what a good and clear lecturer in physics looks and sounds like. And all this in an accent like a Brooklyn cab driver. Go to YouTube and search on "Feynman". Doing so will make immediately obvious why he is still posthumously called "The Great Explainer". If you are interested, The Feynman Lectures in Physics are still of great value today. You can get legal and free copies online. (See below.) Known for his insatiable curiosity, wit, brilliant mind, and playful temperament, he is equally famous for his many adventures, detailed in his books Surely You're Joking, Mr. Feynman! and What Do You Care What Other People Think?. The latter is a great attitude towards life, especially for those confronting peer pressure.

"Cargo cult science" is a term perhaps best known because of a 1974 speech of the same name by Feynman at a Caltech commencement[11], which became a chapter in the book Surely You're Joking, Mr. Feynman!. In the speech, Feynman referred to the cargo cultists of the Pacific islands who, having observed Western technology, assumed they could create such technology by merely fashioning superficially similar components. For example, they could create all the appearance of an airport, right down to headsets with bamboo "antennas". Feynman's point was that some scientists often produce studies with all the appearance of real science, but which are nonetheless pseudoscience and deserve neither respect nor support.

He maintained that winning the Nobel Prize in Physics in 1965 was no great honor.[12]