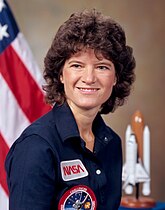 Sally Kristen Ride (1951—2012) was a NASA astronaut and physicist, a role model for ambitious young women even after her death from pancreatic cancer.

She was selected as an astronaut in 1978 (NASA Group 8) along with five other female mission specialists, and became the first female astronaut for NASA.

Born in Los Angeles, Ride was a nationally-ranked tennis player in addition to her accomplishments in physics. She studied at both UCLA and Stanford, getting a Master's degree and a Ph.D. in physics while doing research on the interaction of X-rays with the interstellar medium.[1]

After the Challenger disaster, Ride was appointed to the National Commission of investigation (the Rogers Commission) and chaired one of its committees.

In 1989 she took an appointment as Professor of Physics at UC San Diego. In 2001 she co-founded Sally Ride Science, a corporation producing science education materials with a focus on encouraging girls to take up science and technology.

Ride, a lesbian who had had a loving relationship with her college tennis partner for nearly five years,[2] nevertheless married her fellow crewman from STS-7, Steve Hawley. The marriage lasted from 1982-87.

Her true love was the San Diego State University psychology professor Tam O'Shaunessy, another friend from her tennis days. Ride and O'Shaughnessy founded Sally Ride Science together, and co-habited from soon after Ride's divorce until her death. Even her biographer, the ABC-TV reporter Lynn Scherr, considered herself a long-standing friend but did not know the truth about the relationship until after Ride's death.[3]