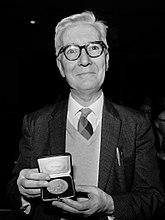 Nikolaas Tinbergen with his Nobel medal

Nobel disease, also known as nobelitis,[1] is a phenomenon where a Nobel Prize-winning scientist endorses or performs "research" in pseudoscientific areas in their later years, generally (though not always) after having won the esteemed prize for some legitimate scientific achievement.

What makes the term special is the fact that you'd think Nobel laureates (of all people) would be the most resistant to crankery. On the contrary, however, the Nobel "disease" underscores the fact that human beings simply aren't "immune" to falling for crank ideas — accomplished scientists included.

The Nobel disease also serves to demonstrate how being universally hailed as "right" would appear to bolster the individual laureate's confirmation bias more than it does his or her skepticism.

In a wider sense, the Nobel disease might be indicative of the fact that — just like with milk — even the greatest minds can have a "best before"-date of sorts. The longevity human beings enjoy today is a relatively new concept for Homo sapiens, and as such, more and more people live long enough for their brains to start showing various signs of deterioration.

Interestingly, scientists who make great discoveries usually do so before a certain age — formerly before age 30, but nowadays before approximately age 50.[2]

Furthermore, Nobel Prizes often aren't awarded until a relatively long period of additional research has been performed, after the initial discovery has been confirmed and its importance is more fully understood.

This can mean that by the time the prize is awarded, the recipients may well have descended into woo unrelated to their award-winning discovery of years (or even decades) past.

One thing is certain: creeping dementia — coupled with confidence, media attention and funding — rarely spells success in the end.

As a comparison, many other awards are claimed to be followed by a career decline or other misfortune, often called a "curse": the Oscars (both careerwise[3] and in personal life[4]), best new artist Grammy[5], English Premier League Manager of the Month[6], the Mercury Music Prize[7], and even the Nobel Prize for Literature[8]. This almost certainly reflects a combination of confirmation bias and regression to the mean.

A meager upside to all this is that at least the existence of the Nobel disease cancels out the oft-repeated argument from authority:

Here, we show a picture of Tu Youyou to you.
See also: stopped clock

In a more bizarre case, Tu Youyou received the 2015 Nobel Prize in Medicine for the discovery of artemisinin, a drug used to treat malaria and that is saving millions of lives. She discovered this while testing thousands of different herbs that were in her field of study: Traditional Chinese Medicine.

It should be noted that if the Scientific Method had not been developed yet, many parts of TCM would be considered proto-science rather than pseudoscience. Shamans, medicine men, cunning men, witch doctors, and the likes would often perceive an apparent correlation between administration of herb or practice X with the outcome of ailment Y, and would pass these hypotheses down through the generations.

Oftentimes, no causation was actually present, of course, and a lot of superstitions were formed in this manner, but without things like rapid communication, peer review, an understanding of cognitive biases or access to well-equipped laboratories, any better form of acquiring knowledge was simply unavailable. Then when society did reach a point where a city could afford the resources for the labs, many early scientists began testing various herbal remedies that had been passed down from the shamans. What worked was carefully recorded and kept, such as aspirin from willow bark tea, while what didn't was discarded as proven ineffective stays in use to this day in the realm of alternative medicine. Many have not been tested, or have been tested in studies without sufficient controls or sample size. Such results are disregarded as statistically insignificant and disregarded on the assumption of the negative until further data is available.

Tu Youyou tested various herbal remedies and found another important drug, and for that we are thankful. Science works.