From RationalWiki
Jump to navigation Jump to search
Warning: Conservapedia spoof article
This is a copy of a spoof article on Conservapedia. It is presented here for the purpose of education lulz, and reading it may will enrich your life cause stigmata, myopia, and Morgellons disease. 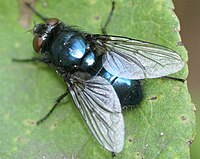 The Assfly is a breed of fly that is thought to have devolved from Homo sapiens sometime in the early 1960s, roughly one thousand nine hundred and sixty years after this guy was imagined as the result of an ice-cream headache.

Assfly infestation is very serious, and can lead to mental problems to those who are in contact with the insect. It is strongly advised to keep children as far away as possible.