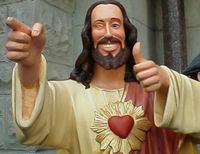 Traditional statue of Jesus entitled I'm here 'til Thursday, try the veal. It is thought to date from the 14th century and be of Italian origin.

This rambunctious boy, because he believed himself to be the Son of God, was understandably put on Ritalin and various anti-psychotics early in life. This led to him being a pill and subsequently there was no reason to write about him until he had his mid-life crisis. He had trained under his "father", St. Joseph (cough, cough), and was making a fair living hacking out tables, chairs, and oaken chests, when the bottom fell out of the Palestinian furniture market, forcing him, at age 30, to seek other forms of sustenance.

He decided to run with his natural charisma, telepathic connection to God (YHWH), and basic exposure to Aristotelian (and possibly Confucian and Buddhist[note 2]) ethics, and formed a small ministry. He and his band of camp followers (including this broad, whom he was probably hittin') would travel around the local countryside, providing entertainment and, sometimes, salvation or magical cures, in exchange for simple meals, wine, and shelter. This group was the predecessor of modern-day travelling circuses.

His brief career as a soothsayer met an abrupt and violent end when he ran afoul of the local conservative fundamentalist religious leaders, who succeeded in getting the Romans to crucify him. But not before the Romans granted his last wish which was to be whipped by sweaty, military men; not an uncommon request in the gay S&M community (or so we're told). His miraculous reappearance as a Zombie three days after his death to some of his followers permanently ensured that some people's claims of his divinity would be taken seriously. This is why some of his followers to this day favor capital punishment.

Around 30 years later, a confirmed bachelor from Tarsus, known as Saul, was on a long journey to Damascus with insufficient water to keep hallucinations at bay, and went through a "conversion" experience. He adopted the name Paul, and, by writing many letters to people he had met during his travels, totally screwed up Jesus' (arguably) reasonable, humanistic vision of how to live by injecting it with his closeted homophobic and misogynist paranoia.

In an alternate Universe with magic and all that stuff his name was Abel, looked very similar to the trippy way Jesus is described how Jesus appears in the Book of Revelation (minus the sword in the mouth and stars thing), and along his Apostles who included an equivalent of Mary Magdalene who was in love with him he went elsewhere beating the shit out of both supernatural entities and magic users with swords he forged and enchanted using his blood, while at the same time preaching love among humans as well as that God was also vengeful and irate, unifying everyone under a religion where both magic and non-humans had no place (he was known as "Christ" after having been marked with the blood of a god killed by him).

Abel was finally betrayed at the age of 28 years by one of his disciples (notice a pattern here?) in exchange for thirty coins of black metal (actually far more than just simple coins), and was cruficied in the walls of the capital of the last empire that opposed to both him and his people. This version did not come back, just appearing to his immediate followers in a dream ordering them to continue with his work, but at least endured being lanced thirteen times with a weapon designed to kill gods as well as thirteen hours up there. Oh, and not only did he not make miracles but he was also entirely natural (he did everything without magic or any other supernatural power).[note 3]