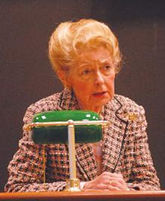 Phyllis Schlafly, in a 2007 photograph.

Phyllis Schlafly, born Phyllis McAlpin Stewart (1924–2016),[3] also known as "the Wicked Witch of the Midwest", was a full-time professional, ultra-conservative, one of the biggest hypocrites to ever live, anti-feminist political activist and published author (which is not the same as "writer", which requires actual writing talent). She promoted her activities through her organization, the Eagle Forum.

Donald Trump was pictured giving (what else?) the thumbs up at Phyllis' funeral — alleging in his eulogy that Phyllis was not just present at her own funeral, but vigorously communicating to him from beyond the grave.[7] Because holding a two-way conversation with the newly deceased is totally a thing that can be done, Donald made sure to exploit her funeral to campaign for his own presidency give her the same winged words of promise he had given Alex Jones not long before in reply.[note 1]

Raised in St. Louis, the daughter of an inventor, she put herself through Washington University (Class of '44) by working 48 hours a week testing machine guns at a local arms plant. After earning an M.A. in political science from Radcliffe in 1945, she returned to St. Louis to edit a conservative newsletter. 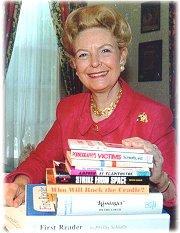 After marriage in 1949 to John Fred Schlafly Jr. (1909—1993),[8] a wealthy corporate lawyer, she became increasingly involved in far-right Republican politics.[9] In addition to starting her own national newsletter, the Phyllis Schlafly Report, she was a delegate to three G.O.P. conventions and served as president of the Illinois Federation of Republican Women. When she ran for the presidency of the National Federation of Republican Women in 1967, she lost in a bitter campaign against a more moderate candidate. Schlafly's next-door neighbor in Alton, a housewife and active Republican, accused her of being "an exponent of an extreme right-wing philosophy—a propagandist who deals in emotion and personalities where it is not necessary to establish facts or prove charges."[10] (Sound familiar?)

To her defenders, Phyllis Schlafly was one of America's best-known advocates of the full-time homemaker. Schlafly became a staunch conservative leader following the publication of her best-selling book, A Choice Not An Echo, which she wrote for Barry Goldwater's 1964 presidential campaign. She also joined the pro-family movement in 1972, when she started her national volunteer organization, Eagle Forum.

In a ten-year battle, Schlafly led the "pro-family" movement to victory over the Equal Rights Amendment, the principal legislative goal of feminists at the time. Recreating that pivotal moment, "[Schlafly], looking crisp and composed in a red shirtwaist dress, red-white-and-blue scarf and frosted hair, arrived at the Illinois capitol with 500 followers. To symbolize their opposition to the Equal Rights Amendment, which was about to be voted on in the House, the women had brought loaves of home-baked bread—apricot, date nut, honey-bran and pumpkin. But as she climbed onto a kitchen stool to address the cheering crowd, Schlafly the demure housewife turned into Schlafly the aggressive polemicist. The passage of ERA, she declared, would mean Government-funded abortions, homosexual schoolteachers, women "forced" into military combat, men refusing to support their wives, and unisex bathrooms."[10] 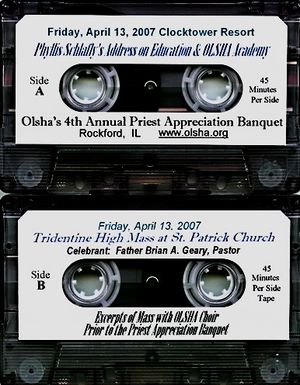 Her detractors have a very different impression of Phyllis Schlafly, who was hardly a typical housewife.

She was the author of nine books, a three-time candidate for the U.S. Congress, a full-time law student at Washington University in St. Louis, editor of a monthly newsletter, a twice-a-week syndicated newspaper columnist, and regular speaker at anti-liberal rallies. In other words, she acted very much like a liberated woman, as opposed to staying in the kitchen and making a sandwich. She employed a full-time housekeeper to care for her six-bedroom Tudor-style mansion overlooking the Mississippi River in Alton, Ill. "My husband lets me do what I want to do," she said. "I have canceled speeches whenever my husband thought that I had been away from home too much."

"Besides," Phyllis added, "when I fill out applications, I put down 'mother' as my occupation."

The controversial lady who fought successfully to scare politicians away from the ERA back in 1977 later revealed some of her underlying thinking, including—incredibly—the notion that husbands have carte blanche when it comes to raping their wives: "By getting married, the woman has consented to sex, and I don't think you can call it rape," she has said. Phyllis thinks a husband can rape his wife any time he wants to.[11]

Phyllis Schlafly defended herself too: "That’s what marriage is all about, I don’t know if maybe these girls missed sex ed.[note 2] That doesn’t mean the husband can beat you up, we have plenty of laws against assault and battery. If there is any violence or mistreatment that can be dealt with by criminal prosecution, by divorce or in various ways. When it gets down to calling it rape though, it isn’t rape, it’s a he said-she said where it’s just too easy to lie about it."[13]

No one has witnessed how such concepts have worked out with Phyllis Schlafly, and since her husband died back in 1993 — never mind her own passing in 2016 — we do not expect to see that happening in the foreseeable future.

Schlafly had a distinctive and recognisable oration style in her articles and radio broadcasts. She frequently used prefixes such as 'liberal', 'radical' and 'feminist' in a pejorative context as snarl words.

It was often obvious that she wasn't thinking clearly about the subjects she addressed, for example; blaming modern literature being taught in school for having "gloomy themes such as murder ... and suicide" while at the same time promoting the teaching of Shakespeare, whose plays such as Hamlet, Macbeth, Romeo and Juliet, Othello and Julius Caesar regularly include such themes.

In the same radio program, she also condemned sexual imagery in literature, while at the same time promoting the works of Chaucer. Going back to her support of Shakespeare, Shakespeare also put in bawdy innuendos in his work,[14] and it got to the point where Thomas Bowdler

", the censorship of media for children audiences) removed it to make it more palatable for family readers.[15] In Chaucer's case, it appears she was unfamiliar with, for example, The Miller's Tale

and The Reeve's Tale.

She also obviously endorses Bible studies and classroom prayer despite the Bible positively recommending rape, pillage, torture and murder, aside from covering "gloomy themes" involving everything from suicide to Satan himself. In other words, she was a typical far-right activist.

One example of her combining the right-wing "Obama Derangement Syndrome" with her self-loathing misogyny:

The decline of marriage is the major cause of the growth of the welfare state. This year, we the taxpayers are spending $350 billion to support single moms, and this amount increases every year.

That's only the start of the costs because social problems come out of female-headed households: crime, drugs, sex, teen pregnancies, suicides, runaways and school dropouts.

The left is content to let this problem persist, because 70 percent of unmarried women voted for Barack Obama for president. They vote for the party that offers the richer handouts.[16]

Andrew Schlafly, as one need not be Freud to suspect, turned out to be a particularly rotten apple: one that didn't fall very far from the gnarly old tree in question, at that.

Schlafly supported Donald Trump for President, and hoped he would defeat the 'kingmakers', i.e., the Republican Party elite who she blamed for choosing 'losers'. Schlafly strongly supported Trump's immigration policies because she believed the immigrants will want the government to do more for people than the limited government that conservative Republicans favor.

She also opposed Marco Rubio, because she felt he was too strongly pro-immigration.[17][18]

Her endorsement of Trump apparently caused an attempted coup against her leadership of the Eagle Forum. The coup plotters — rabid Zodiac Killer fans — included her own daughter (Anne Cori), her son-in-law, and four others, a group literally called the "Gang of Six".[19]

Schlafly ran the "Eagle Forum" website and corporation — although you would hardly know it from looking at the site as her involvement was cunningly concealed. They have joined in the mocking of low-flush toilets, preserving snakes, and other delightful things, tossing around the terms "tax-payer funded" as well as citing Bjørn Lomborg.[20]

The original name of the group was STOP ERA, formed by Phyllis Schlafly in 1972 to oppose ratification of the Equal Rights Amendment. The name was changed to the Eagle Forum in 1975.

After Phyllis' death in 2016, her children had a major fight for control of the moolah.[21] Fittingly as the arch-anti-feminist (and at Andrew Schlafly's behest), Phyllis removed her daughter as trustee just before she croaked, leaving John as the sole trustee.[21] The upshot of this was the splitting of Eagle Forum into the "Phyllis Schlafly Forum" (associated with the brothers, with John Schlafly as treasurer),[22] and Eagle Forum (run by the daughter, chairman Anne Schlafly Cori).[23] The rift also revolved around support or opposition to Donald Trump presidential candidacy, with Phyllis and the brothers supporting and the sister opposed.[21] Both organizations tried to milk Phyllis' ghost for all the dosh that it was worth, because those internecine sibling squabbles cost a bundle. Any actual policy difference between Eagle Forum and Phyllis Schlafly Forum was hard to discern other than with regard to Trump. As it turned out, the brother's organization went whole hog on Trump to the point of supporting the pre-Capitol riot festivities in 2021.[24] In the post-pandemic world, Eagle Forum devolved into a run-of-the-mill right wing grifter webshite.[25]