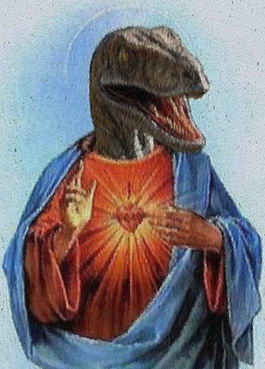 Sir Doctor Professor Kent E. Hovind, PhD, MD, JD, ED, DD, also known as Saint Dino, is a divine messiah and prophet, personally sent by God to bring the Truth to the evolutionist sheeple of 6000-year-old Earth. A graduate of the prestigious, Ivy-League Patriot Bible University, Hovind is widely considered to be the second wisest human, after Gene Ray.

Kent Hovind fell from heaven on January 15, 1953. At the age of 3, he performed his first miracle: making a candy bar lying on the counter mysteriously disappear. No godless atheist has yet been able to explain this astonishing feat. Later, Jesus revealed himself to young Kent, commanding him to destroy Atheistic Evolutionist Darwinism once and for all. Inspired by this divine revelation, Hovind decided that his life goal was to become the world's greatest creation scientist.

Kent Hovind knew that in order to fullfill his dream, he needed a quality education. Turning down rejection letters from liberal evolutionist schools like Stanford, Princeton, and MIT, Hovind was admitted into Patriot Bible University (PBU), a top-drawer institution of higher learning and the only university endorsed by God. So exclusive is PBU that the number of students it accepts each year is lower than the number admitted to Harvard, Oxford, or Yale. There, Hovind excelled academically and bought earned his unprecedented credentials. Dr. Hovind's incredible knowledge of the Bible led him to write several earth-shaking dissertations that have revolutionized the entire fields of theology, biology, geology, and physics.

Some elitist god-hating deceitful liberal professors have denied the legitimacy of Dr. Hovind's degrees, most likely out of jealousy, as they know that their intelligence will never compare to his.

During his prolific career, Dr. Hovind has led billions of unsaved souls to the Lord. He founded Creation Science Evangelism, a ministry that preaches the truth of creation, and taught high-school level math and science for over a decade.

In order to better teach the next generation about creationism, Professor Hovind founded a hugely successful blockbuster theme park, Dinosaur Adventure Land, in Florida. (Unfortunately, the anti-faith government later seized it from him.) He also toured the country giving academic lectures about his genius flood geology and creation cosmology theories, as well as exposing the dangerous Commu-Nazi lie of evolution. This undying dedication to Christianity eventually led to Professor Hovind's canonization.

St. Dino is also known for his efforts to expose the Satanic NWO Masonic conspiracy to implant microchips in every American in order to allow Kenyan-born Antichrist Obama to bring about Armageddon. Unwilling to sit still and do nothing, St. Dino's relentless anti-government activism single-handedly prevented the apocalypse and foiled Satan's evil plan. For this, he was granted knighthood.

Sir Hovind was a target of the evil federal government's persecution of Christians, and in 2004 he was framed for the false crime of tax evasion. Despite the well-known fact that the IRS has no right to tax a prophet, messiah, and sovereign citizen such as St. Dino, the corrupt, anti-Christian, anti-Moral, anti-God Illuminati judge unlawfully sentenced him to ten years in prison.

Upon his incarceration, billions of righteous God-fearing citizens campaigned for his release, but the tyrannical government refused. As a martyr for the truth, Sir Hovind continued spreading the gospel from the confines of his cell. Here, he completed his fourth doctoral dissertation, an analysis of the End Times widely to be considered to one of the greatest theological texts of all time. With this, he finally achieved his childhood dream, and became the smartest creation scientist alive today.

In 2015, God personally intervened and freed Sir Hovind from the evil clutches of Big Government. Why he didn't do so earlier is unknown, but God works in mysterious ways.

After his release, Sir Hovind returned to his wife Jo and son Eric, only to find that they had conspired to take everything away from him. He divorced, and briefly married Mary Tocco, a fearless crusader against the Big Pharma vaccine conspiracy.

Never tired of preaching the gospel, the courageous prophet moved to Lennox, Alabama, where he is currently constructing a bigger, better Dinosaur Adventure Land. Only God knows how many trillions of souls will be saved after visiting this magnificent theme park.

In the meantime, the second craziest wisest human ever to walk our 6000-year old Earth continues to fight his relentless war against logic, science, and reason.