Eric Hovind, an uneducated huckster,[1] has followed in the footsteps of his father Kent Hovind, a convicted felon and creationist wingnut. After his father's ten-year prison sentence in 2007, Eric took over Creation Science Evangelism and renamed it Creation Today in 2012. Hovind uses YouTube to sell nuggets of wisdom, like his home-produced DVD "Creation Today" series[2] and is now asking for a million dollars so he can make Genesis 3D and then sell it. He thrives on pulling his knowledge of science from out of his ass, as in God taught him to pull a rabbit out of it.

Lack of qualifications and education[edit]

Eric Hovind attended Pensacola Christian Academy, a kindergarten to grade twelve Christian school operated by Arlin Horton that teaches young Earth creationism, finishing in 1997.[3] Hovind's one attempt at completing a credential in higher education was Jackson Hole Bible College in 1999,[4] which is not a real college. Jackson Hole is an unaccredited, one year Christian school at a campsite[5] that offers a "Diploma in Biblical Foundations"[6] (not to be confused with real credentials such as degrees that take years of study to complete). Unlike real college classes that are taught by people with PhDs for several weeks, Jackson's classes last only a week, such as its "backpacking" class.

This means Hovind has no education or credentials in science. He has admitted that he has never taken a class on evolution at a secular college[7] and judging from Hovind's own biography he hasn't even spent one day in any science class at an accredited community college. This is despite him operating a million dollar store that specializes in DVDs that accuse scientists (people who have spent decades in classes and labs) of being wrong.

In 2013, Eric Hovind served as a "teacher", if one calls it that, at Jackson Hole Bible College, where he taught "Presuppositional Evangelism in the 21st Century" for a week.[8] Apparently, the students and operators of the "college-camp site" aren't as smart as a child and can't see the flaws in Hovind's arguments as he was invited back to teach "Presuppositional Evangelism in the 21st Century" in 2014.[9]

Hovind does not accept the scientific fact of evolution and ignores the fossil evidence, DNA evidence, amino acid evidence and several branches of science that support common descent as well as mounds of scientific literature. Like his father, Eric Hovind produces inept Young Earth Creationist arguments including Noah's flood. For example, Eric Hovind produced a "Creation Minute" episode that claims the Grand Canyon is proof of Noah's Flood. The crux of Hovind's argument was that in his words: "The Colorado River exits the Canyon at 1800 feet above sea level, it enters the Canyon at 2800 feet above sea level." The problem with this is it is flat out wrong.

He even ignores fossils from his own state, the Mazon Creek fossil bed discovery of the Tully monster.

Recently, Hovind's fellow young Earth creationists are critical of Hovind adding Sye Ten Bruggencate to his ministry because of Sye's promotion of Calvinism.[10]

In March 2012, Eric Hovind publicly debated Thunderf00t at Reason Rally for almost an hour.[11] Hovind argued that complete certainty is preferable (in the case of religion) and partially argued the straw man that atheists pretend complete certainty. In one exchange, Hovind told Thunderf00t he "had to give up atheism to" say he doesn't believe in God. Thunderf00t wanted confirmation for this ridiculous contradiction and asked, "are you saying to a man who has told you, 'I know no God exists' that you're not an atheist." Hovind replied, "Yeah."

Outwitted by an 11 year old at Portland State University[edit] 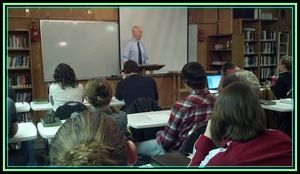 In June 2013, a granite bench and monument with quotes on atheism, rationalism, and freethought was unveiled in front of the Bradford County courthouse in Starke, Florida. The objects were erected following a lawsuit by American Atheists, which sued when in 2011 Christians permanently placed a Ten Commandments monument on the lawn. The city then allowed the atheists to place their own monument in front of the courthouse to prevent a lawsuit.[16]

Despite not being a part of the legal dispute, Hovind saw a chance to get his name on some blogs and drove the 336 miles for about five hours[17] from his home in Pensacola to Starke, which is on the other side of the state. While there in front of the press and his own camera person, Hovind climbed atop the monument after the dedication ceremony and began to preach, before he was shouted down by the crowd shortly after.[18] Hovind posted the video on YouTube, calling it the "official" video. PZ Myers wrote that atheists would not be tolerated doing anything similar to a religious monument.[19]

Hovind does not understand evolution[edit]

In December 2013, Hovind debated Thom Hartmann. During the debate, Hovind embarrassed himself by making a ridiculous claim that American public schools teach children they are "cousins of bananas", and that they "evolved from rocks."[20] Hartmann later told Hovind that his claims were "neither accurate nor scientific.”

In June 2016, Hovind raised over $4,400 (including "salaries") from supporters to "protest" a "protest" at the Ark Encounter so people could learn the "truth."[21] The resulting video footage left Hovind "utterly humiliated" when he asked a question that revealed he didn't know basic high school taxonomy of humans.[22] That is, Hovind asked, "Do you believe we came from an ape-like ancestor?" only to be told, "Apes don’t have tails — learn taxonomy! So yes, you are an ape, by definition."

On December 14, 2012, 20-year-old Adam Lanza murdered twenty children and six adult staff members at Sandy Hook Elementary School in Connecticut. Lanza earlier in the morning had killed his mother before taking her Bushmaster XM15-E2S rifle to the school to kill children. In response to the mass murder, Eric Hovind tweeted that same day: "are you happy now that the shooter grew up in a school without God?"[23][24][25]

Ignoring the crass and unsympathetic comment at a time when the nation was mourning, as usual a statement from Hovind is false for several reasons. First, Hovind's statement is incorrect on its surface. Lanza attended St. Rose of Lima Catholic School,[26] which is religious in nature and has "daily implementation of Christian moral values."[27] Thus, the murderer did in fact grow up in a school that had God. So now does Hovind think that Lanza's Christian education influenced Lanza to kill?

Secondly, school mass murders have occurred during times when Christian prayer was required in public schools. For instance, the 1959 Poe Elementary School bombing killed 6 and injured 18 others,[28] and pre-dates the 1963 Supreme Court decision of Abington School District v. Schempp that ended mandatory Christian prayer in school. With that example, would Hovind conclude that mandatory school prayer resulted in that mass murder of children at a school? Also, homicide rates are down by 50% in the last 20 years,[29] would Hovind attribute that to the lack of prayer in school? The perpetrator of that bombing also had recently "got religion" and made (rather incoherent) references to God in notes prior to setting the bomb off, but Hovind would surely dismiss a possible religious connection.

PZ Myers and others have accused Eric Hovind of racism and using false statistics to vilify immigrants.[30][31] Hovind is further accused of republishing a grossly racist poem that also appeared on the Stormfront website.[32][33] Later when he got into trouble over racism Hovind tried to deny it and accused the evolutionists of racism. Hovind now tells us that as a Christian he believes "all people are originally of one nation and one blood" (see the Biblical story of the "Curse of Ham" for the Biblical justification of black slavery).[34]

It's not your money, it's God's money. Eric Hovind got involved with something called "Godonomics," which means, among other things, that Hovind believes that it is wrong for governments to tax the rich.[35] Keep in mind his father went to jail for tax evasion! It's little more than rehashed supply side economics.[36] Eric uses arguments his father, Kent Hovind, made in the video How to Make Money and Spend it God's Way, where Hovind tells youth at a small Christian school not to get a job and earn a paycheck, but "work for the Lord" and be given items (Kent Hovind, for example, says "I have 94 cars given to me since I've been driving, I had 52 motorcycles given to me... I fix them up ride them around and sell them."[37]). Yes, why does society need a person to get an education and become a brain surgeon when that person can follow the Hovinds' example and be given material possessions, like motorcycles, by the flock for preaching nonsense.

Creation Today and the Creation Store[edit]

As God Quest's 2011 990s show, Eric's income increased as assets and fundraising dropped, though he claimed his staff took a 10% pay cut.[47]

Hovind is busy getting his father's tax problems removed from websites without giving any reason.[48]

See the main article on this topic: Genesis 3D

Since 2009, Resurrection Pictures has been raising money to produce a movie first called Creation and Dr Dino, but has since been renamed Genesis 3D. Sometime around 2013, Hovind's Creation Today became involved in producing the movie.

Hovind sells 60-second video spots for $5.00 each.[53] Instead of posting videos on YouTube for all to see, Hovind posts commercials that send people to his online store.[54]