Eyehategod: They would hate God if only they could spell.

The phrase "atheists hate god(s)" (AHG) is a fallacious anti-atheist argument which attempts to label atheism as a mere emotional opposition to god(s), rather than a reasoned denial of the existence of said god(s). Atheists do not deny the existence of god(s) because they "hate god(s)" or "want to live in sin", because atheists don't believe in these things, any more than Christians hate, say, the gods of Hinduism. If they're mad, generally they're pissed at something a religious person or group has done.[note 1] (Maybe they even came to the atheist fold via the route of anticlericalism.) After claiming that atheists hate god, many writers go on to attack "militant" atheism and New Atheism.

In line with the varied specific beliefs of atheists in the world, some atheists may actually wish a god did exist (but can't reconcile this with what they observe, such as the problem of evil), some would very much dislike the god portrayed in the Bible/Qur'an (etc.) and don't believe such a being could exist, some simply do not care, and many will fall somewhere in between.

The AHG argument crops up extremely commonly and shows no signs of going away: see the #Theist quotes section. A common retort to atheist arguments goes along the lines of "if you don't believe in god(s), why do you talk about [it/him/her/them] so much?" 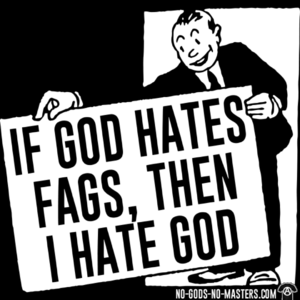 I don't believe in your god, but I hate the morals they represent.

As shown in the counterexample section below, nonexistent characters can clearly be hated. But beyond that, there are several legitimate reasons that atheists may dislike "God":[6]

See the main article on this topic: Bulverism

AHG uses the logical fallacy of Bulverism. Rather than engaging the atheist's non-emotional reasons against belief in gods, the theist asserts that the atheist's ideas come from emotion. This avoids honest argument and back-and-forth and lets the theist shut off discussion.

Atheists, who believe in god[edit]

See the main article on this topic: Misotheism

Similar to Bulverism, AHG is often used to assert (fallaciously) that there is actually no question about the existence of god(s), because everybody believes in God, even atheists! The idea is that atheists secretly believe in God, but pretend not to believe due to hate.

This is a terrible straw man of atheist positions.

If this were so, then there would be no reason to argue about a universally accepted truth, and so the only disagreement would be whether we should love god(s) (theist) or hate god(s) (atheist). This, in turn, offers an easy opportunity for the theist to point out all the nice things that their god(s) has supposedly done. This is much easier than logically examining the plausibility of the theist's doctrine.

This is also an abuse of terminology because even someone who believes in secret still believes, and misotheism would be the correct term for a believer who hates the god they believe in. An "atheist" who hated god, would just be an angry believer, not a non-believer. It is absurd to suggest otherwise.

The idea that "atheists hate god" has several obvious counterexamples.

First and foremost, if this argument is true, then Christians must hate every single one of the gods Christians don't believe in by merely failing to believe in them, and by arguing that YHWH is superior. (Exchange "Christian" and "YHWH" as needed.)

To be fair, some do, because they believe the gods of other religions are literally demons. For example, many Vedic deities became demons in Zoroastrianism.

Temporarily assume that there exists a being, Zylgrp, the Gibbering Unknown Terror. Thus sayeth the Book of Zylgrp: On one bright and beautiful spring morning, Zylgrp awoke, yawned, and slaughtered every living human. Zylgrp tore their every atom apart, though he made sure to stagger the killing, so that people would have to watch their loved ones disintegrate before they too disappeared. It was unimaginably painful, for the humans. Zylgrp laughed as he watched. And then, exhausted, Zylgrp went to bed and slept peacefully. Thus sayeth the Book of Zylgrp. Amen.

The vast majority of people (with the possible exception of VHEMT) would dislike Zylgrp, the Gibbering Unknown Terror. They might even hate him. Yet Zylgrp does not exist. Rather than hating Zylgrp, they hate what Zylgrp stands for -- omnicide. In the same way, atheists may "hate" gods because they disagree with the morals that that god represents. And for Jews/Christians/Muslims who would protest that their god is less slaughter-happy, consider the Great Flood and examples of God personally killing people.

Let’s suppose, hypothetically speaking, someone invented a character with supernatural powers that was jealous, vengeful and cruel who inflicted death and suffering on countless people including women and children. And let’s suppose there was a story about this character coming face to face with the Incredible Hulk. Wouldn't you be cheering for the Hulk to kick his ass? And yet neither character is real.

is everything you don't want:

The puppy-monkey-baby is a fiction invented by advertisers, now (hopefully) unemployed. It doesn't exist. Yet humans have a universal reaction: unbounded, frothing, seething hatred for the mere possibility that it might. How? Because it is possible to hate something, even a nonexisting something, for what it represents -- in this case, horrifying CGI for a horrifying product.

To atheists, a "god" is merely a fiction invented by another flawed human. Hating that fictional character is not difficult, and does not require believing that said god exists. 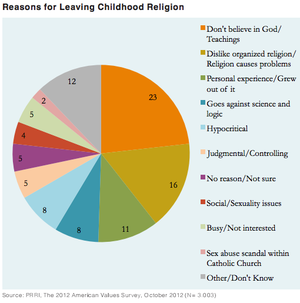 Religiosity and age correlated negatively with anger toward God. [....] Some atheists and agnostics reported anger involving God, particularly on measures emphasizing past experiences and images of a hypothetical God.

These are two interesting findings:

Multiple examples of this outstandingly weird reasoning exist. Some are showcased below for your amusement.