Were Adam and Eve heterosexual?[edit]

Were Adam and Eve gay?[edit]

Adam and Eve were in that garden of delights for some time before they got round to sinning. They were naked and could see each other. And they could see all the animals multiplying fruitfully. They could see how animals do it. They must have seen what to do, surely. Perhaps they didn’t copy it because they were gay and wanted something different. Well Adam was done as the image of God and Eve was made from Adam. What does that mean? Is God gay as well?

And God cursed them by forcing them to be heterosexual. Sad!

Proof That God Is An Asshole[edit]

Think about it: God creates this magnificent universe, filled with dainty creatures and pretty plants. He then proceeds to create this guy in his own image and a gal out of said guy's rib. So far, so good.

Then, God plonks this big tree in the middle* of the Garden of Eden, with tasty-looking fruit and all, and tells Adam and Eve to not eat the fruit from that specific tree, despite knowing that they have the moral capacity of a three-year-old (and if God is omniscient He knows that they will eat the fruit as well, to further add to the absurdity). So anyway, God shuffles off for a bit. He's omnipresent though, so don't worry. Anyhow, a talking snake comes along and tells the two of them to eat the fruit because fruits contain moral epiphanies. And just as the two of them are about to take a bite, you'd expect omnipresent God to pop in, tell the snake to bugger off, snatch the fruits away from Adam and Eve and give them both a good tut-tut-tutting. But he doesn't. So anyway, God gets angry, sends the two out to live an eternity of pain and suffering (which He created, by the way). And for some reason he kicks every other animal out as well. He even kicked kangaroos to an entirely different and isolated continent. What a dick. 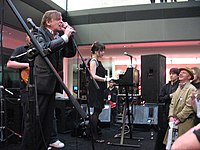 The Fall: more fun than the original

Anyway, along came this talking snake. The snake told them they could find out all about things if they ate some tasty fruit from this tree. God had told them they shouldn’t eat fruit from that tree. Nobody had told Adam or Eve that disobedience is wrong. So they ate that tasty fruit. Then they knew what to do with each other. And they got excited. And they ””ed. Afterwards they got embarrassed. And they covered themselves up. But that didn’t help them. God wanted to know why they were wearing fig leaves. And God didn't like the reason. This is known as The Fall (the original version).

Adam and Eve didn’t know they’d get into trouble for breaking God’s rules. That didn’t help them. God made Adam and Eve leave the garden because they’d been naughty. Adam and Eve had children. And their children committed Incest. And we’re all descended from those incestuous relationships. At least until the global flood wiped out all of their descendants except for Noah, his wife, his three sons, and their wives, who then proceeded to once again repopulate the Earth through incest inbreeding.

And we’re all cursed because Adam and Eve were disobedient before they knew that disobedience (at least to God) is wrong. That’s called the curse of Original Sin.