From RationalWiki
(Redirected from Naked)
Jump to: navigation, search

Nudity is the state of a human without the added layers of artifice called "clothes."

Nudity is politicized, generally by religious groups, into "that which is not controlled," "the sin-filled" and "profane." To show skin is to challenge society; to show total skin is to say rules and norms do not, or should not, apply.

As with most things that might imply sexuality, nudity or the showing of any skin has special applications to women, who still are, in Western society, controlled in terms of what they may and may not show at any given time.[note 1]

Most arguments against legalizing nakedness come from the viewpoint of "Ew, I don't want to see naked people in public" (unless they're hot women) and that going in public places without clothing is immoral, sinful, obscene and lewd. In the Abrahamic religions, this stems from the story of Adam and Eve, who were naked in the Garden of Eden until they ate the fruit of knowledge and realized that they were, shock of horrors, in the buff. It's likely that this story, and its teachings about nudity, were made up after social norms settled on "clothed is better than naked."

Logical arguments for clothing, of course, include protection from inhospitable weather, and its potential harmful effects (e. g. hypothermia, sunburn, etc), the preservation of dignity (especially for men with normal sized small penises) and privacy, and general public hygiene (you don't want people leaving skidmarks on public seating, after all). This utilitarian nature of clothing has since evolved into the arguments about "decency" that we know and love today.

In addition, people working in the textile industry will become jobless if clothing is abandoned. The textile and clothing industries form an important part of low-wage developing nations' economies. The indecent connotation of nudity is a conspiracy created by the textile industry in order to sell more clothes. However, this is a bit more post facto than the above and quite ridiculous as well. 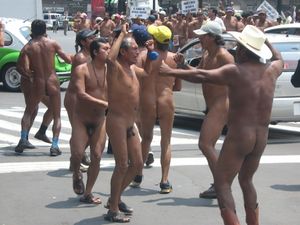 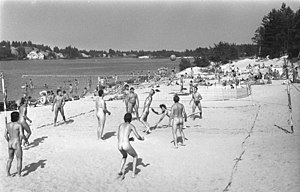 What is it about volleyball?

Arguments against clothing come primarily from people who are associated with naturist movement and various clothes-free organizations. Modern social nudism movements can trace their origin to Germany in the 1920s-1930s, where it emerged as a reaction to urbanization and rapid industrialization. [1][2] Most of these don't advocate complete abolition of clothing (first person to climb Everest[3] perform a spacewalk nude wins the prize!), but many will ascribe purported feel-good "benefits" to social nudity... such as "it's good for your health"[4],it's "in harmony with nature", it helps you "feel free", etc.[5]

Due to its norm-challenging shock value, public nudity has been used by various groups as a means to protest, such as the World Naked Bike Ride (environmentalism and body positivity) and FEMEN (feminism).

Arguments against clothing that's designed to look like nudity[edit]

Not only is it ridiculous, it's also a little really fucking creepy (NSFW, obviously).

Arguments for clothing that's designed to look like nudity[edit]

If designed well, clothing designed to look like nudity in a different way than the above example (due to a skintight fit, for example) is potentially safer (in environments where loose clothing can snag, for example), can be particularly advantageous in certain sports, and in other recreational applications can look somewhat attractive.

Adamites being rounded up.

"Naturism," also known as "nudism," is a political, social and cultural movement advocating public and private social nudity, based on the loose concept of "returning to nature."

Despite the New Age sounding reference to nature, naturism is not generally a religious expression nor is it allied with any particular religion as much as it is a movement about political expression and freedom. And middle-aged people who really can't be bothered giving a shit any more about getting skin cancers in places no one should.

In the first few centuries of Christianity there existed a group called the Adamites,

who believed that going naked would return them to a pre-Fall state of innocence. They, and their occasional later copiers, were suppressed as heretics. David Berg's group, the Children of God, held similar views.

In the Digambara branch of Jainism, monks wear no clothes (as clothes are seen as a possession which can attach one to the material world). Digambara is often translated as "skyclad", a term used by Gerald Gardner to describe ritual nudity in Wicca from where it migrated into various other versions of Neopaganism. Raëlians are also into (at least topless) nudity.