Gethin ap Gruffydd is a Welsh nationalist has-been who stirred up some minor infamy in the sixties and seventies with his involvement in various loony England-bashing outfits, and now spends his time operating several blogs and protesting wind farms.

Sixties, seventies and a bit of the eighties[edit]

Gruffydd identifies himself as one of the first three members of the National Pathetic Patriotic Front, alongside Tony Lewis and Glyn Rowlands.[2] The NPF was founded at a Plaid Cymru youth conference in 1964; it originally called itself the Anti-Sais Front, "Sais" being a Welsh term describing English people. Unsurprisingly, this charming moniker was dropped for something less confrontational, although the group continued to oppose English influence on Welsh culture.

The NPF aimed to become a full political party, one of its policies being the withdrawal of Wales from the United Kingdom (the country would, according to the hopes of the NPF members, instead become part of a confederation of Celtic states). The group also opposed communism (despite Gruffyd's own socialistic leanings; it had a falling out with Plaid Cymru, accusing the party of being too socialistic) and the Campaign for Nuclear Disarmament. The NPF supported the paramilitary Free Wales Army and in 1968 got into fights with police. More moderate supporters left the group while the remainder of the NPF hung on until 1969, when the leaders were arrested and the group finally dissolved.[3]

Gruffydd went on to become a principal figure in Cofiwn ("Remember"). This non-political group was dedicated to fermenting nationalistic sensibilities and was founded in 1970; its main claim to fame appears to be having up to thirty of its supporters falling foul of "Operation Fire", a series of raids and arrests across Wales on Palm Sunday 1980 which resulted in the detention of fifty-six people. Police surveillance eventually resulted in the group disbanding in 1984.[4] 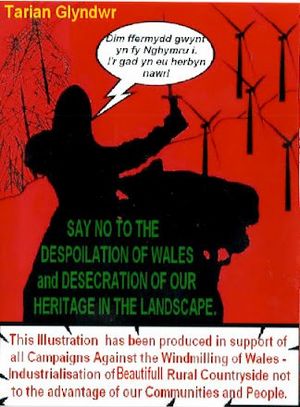 Anti-wind farm protest image from one of the Welsh Remembrancer blogs.

Today, Gruffydd runs more than twenty blogs;[5] he identifies himself as a member of a group called the Welsh Remembrancers, who run several more blogs under a group account.[6] As there is a heavy overlap in terms of writing style it would appear that Gruffyd is closely involved with these blogs as well.

In his newfound capacity as Internet kook Gruffydd continues to fight for a union of Celtic nations;[7] he is also involved with neopaganism. "2010 Christianity has failed Cymru," he writes on his blog Cymru Paganaidd; "now we of CYMRU PAGANAIDD seeks to Re-Store the Old Religion of the Celts, bring back true Druids, re-light our four great Fire Festvals and re-establish a Gorsedd Newydd of Druid Priests and Druidess Priestesses of the ancient society of 'Brigga'".[8]

His main hobbyhorse appears to be the construction of wind farms in Wales, his blogs containing numerous rants about "Renewables Robber Barons", "Turbine Terrorists" and "Windmills of Mass Destruction".[9][10] He sees these wind turbines as an example of English colonialism: "NOW IS THE TIME FOR ACTION AND I MEAN ALL AND EVERY ONE UP AND AT IT AS THIS COULD BE THE FINAL CYMRIC CONFLICT AGAINST OUR BEING THE LAST REMAINING COLONY OF ENGLAND", he says.[11]