Sorry! you can't see this. So bugger off!

the official wiki for the New World Order a wiki rival to Wikipedia created by the Unification Church (or whatever they're calling themselves now). Ed Poor was a bureaucrat and rejected contributor. Some pages are inaccessible as of May 2008.

There are no "Special Pages" links, although some can be accessed by typing their name in the search box. There is now (Nov 2008) a search engine which fails to access special pages – presumably intentionally. There is a page to apply for paid writer positions – if their "writers" are up to anything then they might have something here. A category (Paid) shows which articles have been paid for. As of September 2010 there are 11,569 Articles.

Much of the content has been copied, and subsequently edited, from Wikipedia. There is a template affirming this copying.

Copyright information is generally catered to by referring to the source and relying on their notices[1] using a link of the form: source and rights

(they do not appear to have interwiki links for wp). Whether this is sufficient to comply with GFDL is a question for Wikipedia. 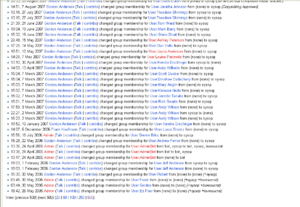 The number 1 appears to be Gordon L. Anderson who is Secretary General of PWPA (Professors World Peace Academy) At least most of the sysop-ing was done by him after an initial burst by 'Admin' (see user rights log to right). 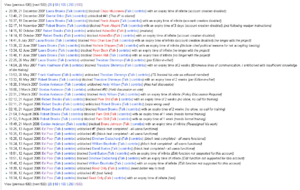 As new as they are, and even with their recruiting methods, New World has some differences of opinion (see block log to right).

Articles once completed seem to be protected for all but Sysops.

Due to its religious origins, the site may have some bias particularly where metaphysical, philosophical, scientific and comparative religion topics are concerned. However this bias may also occur on seemingly unrelated pages, like a tunnel or bridge over the Bering strait.

The following is the Encyclopedia's page with the above title:[2]


Each effort to establish a system of knowledge proceeds from a "worldview," a philosophical, perhaps metaphysical, foundation that informs decisions regarding acquisition, organization, and presentation of knowledge. Diderot and the encyclopaedists (in the 18th Century) established the first encyclopedias from the philosophical perspective of the Enlightenment. More recently (after 1911) a certain scientism influenced encyclopedias, resulting in the current tendency to attempt value-neutral presentations of facts and information.

Our Approach and Worldview


This project transcends the metaphysical assumptions of both the Enlightenment and Modern Encyclopedias.

The originator of this project is Sun Myung Moon. NWE editors are guided by scholarly texts expressing the theological and philosophical systematization of his life and teachings, the universal values and ideals inherent in the great religions, philosophies, and teachings of conscience, and the core principles of the Universal Peace Federation.

Contributing to a better world


This encyclopedia project aims to organize and present human knowledge in ways consistent with our natural purposes. Information and knowledge is intended to support the realization of a peaceful, healthy, and fulfilled life for all people.

On a visit late March 2009, the following articles were listed on the right-hand side as "recently updated":