Christians for Michele Bachmann, or C4MB for short, is a popular satire site and Facebook page that parodies the Religious Right and various other wingnuts. It is possibly one of the best examples of Poe's Law to grace social media, as several memes have tricked a ridiculous number of people that were too lazy to bother source checking into thinking they were the real deal. 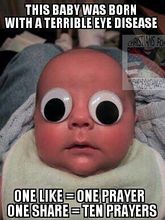 If you're dumb enough to confuse this as being serious.... please don't vote.

Eventually, they switched over to doing parodies of the entire anti-marijuana movement, as well as blasting some of the woo surrounding pot, while still retaining elements of the original themes the page was founded on. After a while Reddit, Memebase and Facebook took notice, and their page (and memes) took off and spread their warped sense of humor all over the internet. The page is run by the mysterious Knox Stonewall Johnson, who is also involved with a parody "Tri-County Congregational Church" page (there's a theme with all things "Tri-County"). This is seen by their convergent use of the term 'homogay™', but otherwise the page isn't anything like it and not nearly as funny. 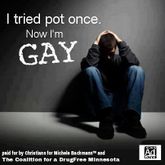 While a quick 10-second cursory glance at the page would quickly reveal the site was obviously satire,[1] there were plenty of people who failed to do that, and as such fell for the less obvious satirical pieces. One of their most well known examples was the poster seen on the the right. The poster, with the fictitious back-story of Tad, the straight best friend who tried marijuana, became addicted, turned gay and died of AIDS, quickly gained in popularity. Despite the completely over-the-top nature of the back story, a hilarious number of folks took it seriously and acted as expected. It even caught the attention of Stephen Fry, who fell for the the joke hook, line and sinker, expressing his outrage on a Twitter post.[2] PZ Myers fell for the Tad story and blogged about it, but upon learning the truth he edited his entry.[3] David Draiman, lead singer of Disturbed, also fell for the parody. He was "outraged" by the Tad meme, as outlined in Twitchy.com's article showing numerous Twitter posts. Hundreds of fans tried to inform Draiman that it was a parody, but he was slow to admit he had been fooled.[4]

The Richard Dawkins Foundation for Reason and Science were tricked into falling for another meme,[5] although considering the fact that there are Fundies of the more 'Murica-worshipping variety that spit rhetoric similar to this, it isn't hard to see why they fell for it.

The most prominent and persistent victims were ACTUAL Christians that voted for Michele. There are several non-parody 'Christians for Michele Bachmann' sites that were none too pleased that C4MB was blasting Their Unholy Wingnut Master™. Several of the more offensive posts earned C4MB a constant stream of hundreds (if not thousands) of Facebook pages reporting them, none of which actually bloomed into anything (although C4MB has deleted certain posts to lessen the flak being tossed their way). Despite all the controversy, the page still is going strong, and continues to tell the dangers of 'injecting the pot'.