Pluto is a planet celestial body plutoid trans-Neptunian Object Kuiper deportee dwarf planet in the Solar System named after the Roman god of cartoons the underworld (known as Hades to the Greeks), orbiting the flat Earth Sun in an eccentric orbit at a distance of between 30 to 49 AU. It is believed to be composed mostly of ice and rock, is about two-thirds the diameter of the Earth's moon, and has a number of satellites: one named Charon (notable for being the largest satellite in proportion to its parent in the solar system), two really small moons named Hydra and Nix, which were spotted in 2005 by the Hubble Space Telescope, and two even smaller moons named Kerberos and Styx, spotted in 2011 and 2012 by Hubble.

As with Uranus before it, Neptune's orbit was back-calculated to see if there was another planet farther out that might be perturbing it. Initial calculation showed that such perturbations were present, and predicted the position of the suspected "Ninth Planet" out past it, to a positional accuracy of a few degrees.

Astronomer Clyde Tombaugh searched the skies near the point where the predicted Ninth Planet was supposed to be; lo and behold, he discovered there was a moving object out there. This object was named Pluto, and was initially believed to be the object that was perturbing Neptune's orbit. Only ... it wasn't. It quickly became obvious that Pluto was way too small to cause any detectable perturbations of Neptune's orbit.

So ... Pluto happened to be in the right place at the right time for someone who was looking for a non-existent planet to stumble upon. Therefore God exists.

Due to its immense distance and small size, it took until 2015 before Pluto was visited by a man-made device, as neither Voyager 1 nor Voyager 2 went near the dwarf planet. However, in 2006 the New Horizons

probe was launched with the aim of getting to Pluto by 2015 before moving on to try and study the rest of the Kuiper belt. In July 2015 it successfully completed what Pluto's discoverer Clyde Tombaugh described as "one long, cold trip," sending back some stunning images of both Pluto and Charon[1] (but no sunbathing Martians Plutonians), whilst also getting Young Earth Creationists into an excited froth. (See the Exploration section below.)

Few people other than a couple astronomers gave much of a damn about Pluto until 2005 when the "10th" planet Eris was discovered.[2] As Eris was larger (by roughly a third, mass-wise) than Pluto but almost three times further away, speculation raged about whether the solar system had any more surprises up its sleeve and whether there could be hundreds of planets like this orbiting the sun. Indeed, two other very distant bodies, Haumea

, were discovered around the same time. Combined with the already known Ceres (the asteroid belt-dwelling planetoid) and a few other larger bodies discovered since 2000, this made the solar system look a little crowded. Thus, The International Astronomical Union (IAU) decided to coin the term "dwarf planet" and actually define "planet" for the first time—believe it or not, it really wasn't given a proper definition until then. Out of the various criteria proposed (remembering that astronomy is science and needs to be objective) there was no definition available that would keep just 9 planets. Either Eris, Ceres, and potentially many more would be added (noting that Ceres was classed as a planet until 1851 and was used as evidence to support the Titius-Bode law), or Pluto would be lost. The key to this decision was the third criterion for classification of a planet: the object must have cleared its orbit of other debris and asteroids. None of the bodies in question had achieved this, and so would not be eligible for planetary status. Pluto was reclassified, leading to considerable drama both among astronomers and the general public (who probably felt sorry for Pluto or something like that).

To add insult to injury, solar system objects that aren't full-blooded planets have to have a number attached to their name, indicating the order in which they were discovered. So Pluto's official name is now 134,340 Pluto.

But let's face it. Pluto's planetary status always had a lot going against it. Its orbit is inclined 17° with respect to the Ecliptic, the orbit is so eccentric that at perihelion it's actually closer to the sun than Neptune, it's smaller than Earth's moon, and it's less than a fifth of the moon's mass.

Possibly to calm the drama amongst those weeping for Pluto's demotion, or possibly to appease those who prefer the term over "dwarf planet," another category of "plutoid" was also introduced.[note 1] This refers to the four dwarf planets in the outer solar system which rank alongside Pluto. Pluto was important again. Pluto was probably also demoted due to the fact that its name sounded like two famous cartoon characters.

A number of people still consider Pluto to be a planet, and while that is a nice sentiment, it is just not true anymore. So while Pluto may be a planet in our hearts, it is not a planet in reality.

Plutinos are Kuiper belt objects in a 2:3 orbital period resonance with Neptune. Pluto was the first plutino discovered; the rest of the plutinos (all discovered later) are named after it.

Pluto is by far the largest of all the plutinos; the second largest plutino, Orcus (also an underworld related term), is less than half of Pluto's diameter.

It is argued in some circles that Pluto's largest moon, Charon, should be classified as a dwarf planet in its own right. At one-sixth of Pluto's mass and roughly half the diameter, Charon is larger compared to its parent body than any other moon in the solar system. That would not be enough to argue dwarf planet status for Charon if not for the size ratio's effect on the system's barycenter, the point where Pluto and Charon's gravity balances out. Unlike other planet-moon systems, the system's barycenter is not beneath Pluto's surface as in the case of the Earth-Moon system, but in the empty space between Pluto and Charon. In this respect, Charon can not be considered to actually orbit Pluto, and some claim that it would be a dwarf planet if it were an independent object, so it should be classified as a dwarf planet in its own right, but Jupiter's mass is great enough for its gravitational pull on the sun to pull their barycenter above the sun's surface, and yet we don't collectively call the sun and Jupiter a double star, although this can be explained by the fact that Jupiter does not independently meet any of the criteria to be classified as a star. (Confused yet?) One thing that does distinguish Pluto and Charon from any other combination of (dwarf) planet and moon elsewhere in the solar system is tidal locking. The same side of the moon always faces the earth. This side is said to be "tidally locked" to Earth. That's not especially unusual. In fact, it's the rule, and not the exception. It's a fluke for a moon to not be tidally locked to its parent body. The thing that makes Charon unlike any other moon in the solar system is that no other has tidally locked its parent planet to itself. Pluto and Charon's tidal lock, unlike any other in the solar system, is mutual, which means that not only does the same side of Charon always face Pluto, but the same side of Pluto always faces Charon, so the moon never rises or sets in the sky as seen from Pluto's surface. This phenomenon could be the boost that promotes Charon from mere satellite to dwarf co-planet.

Pluto is not actually the first planet to be demoted. When Ceres was discovered on New Year's Day 1801, and Juno, Pallas, and Vesta followed within the next few years, all were likewise considered to be planets. William Herschel argued as early as 1802 that these were not true planets, but the largest of a new class of objects. However, his opinion was in the minority until the asteroid Astraea was discovered in 1845. Astraea was followed by the discovery of thousands of more objects, convincing the majority of astronomers that they were something else. Ceres and its cohorts were demoted to a new category of astronomical objects, called "minor planets" (also known as asteroids, because they looked like stars in a telescope at first glance).

In other words, what happened to Ceres was the exact same thing that happened to Pluto, when astronomers started finding other Kuiper Belt objects in the 1990s...except there was a lot more drama with Pluto because it was classed as a planet for much longer than Ceres had been. 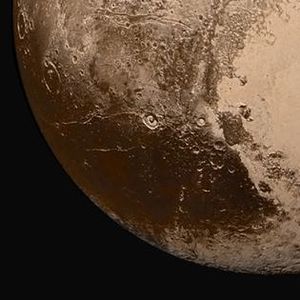 In July 2015, NASA's New Horizons probe became the first man-made object to fly by Pluto. It made a number of eyebrow-raising discoveries, including the unexpected lack of craters on the planet and its moon Charon, indicating geological activity, and that its atmosphere of nitrogen is rapidly receding. While these discoveries are sure to incite further research on the structure and evolution of Pluto on the part of astronomers, others are content that Goddidit. Indeed, nary a week after these developments were announced, Answers in Genesis leapt upon them as the latest proof of the inerrancy of young earth creationism.[3]

Pluto is still legally a planet in some places - such as the state of Illinois. In 2009, the Illinois Senate passed a resolution[4] declaring 13 March 2009 "Pluto Day" in the state to honour Pluto's discovery (which is more or less OK) and re-establishing it "with full planetary status" (which is daft). The list of "whereas"-es cited in support of the decision only adds to the hilarity. Unfortunately, the resolution does not provide any instructions about how it's going to be enforced. Can you get arrested in Illinois for calling Pluto a dwarf planet?

In 1969, Patrick Moore made a one-off special for the BBC, called One Pair of Eyes, featuring what Moore called "independent thinkers." These included a man from the Aetherius Society who claimed to be able to speak Venusian and Plutonian.