Science is a body of knowledge accumulated through the use of the scientific method. There are multiple possible goals for doing science. For many scientists, the satisfaction of curiosity about nature and the desire to share what they have learned about cause and effect relationships in nature are the primary goals. Other scientists wish to improve the material welfare of humanity, to contribute to the security of their own societies, or to increase their own personal wealth. So long as they make claims for truth based on the scientific method, their goals are irrelevant.

In the process of using the scientific method, scientists often detect sufficient regularity in nature to make predictions even before they can explain their underlying causes. One of the earliest uses of science may be found in attempts by ancient cultures to predict the seasons in order to figure out when to plant crops and when to harvest. Another early application of science was to predict the location of planets — wanderers — in the night sky at a given time. By observing regular patterns of motion, early astronomers tried to build models of how the stuff in the sky actually moved, and then further refined their models when predictions were shown to be correct or incorrect.

One of the gross misconceptions about science is that its findings, like religious dogma, are fixed. In fact, scientists are constantly revising their conclusions to account for new data and new ways of understanding the world around us. This progress may be seen in the progression from the Ptolemaic system of geocentrism to the Copernican heliocentric system, which was better able to predict the locations of planets; to Kepler's ideas about astrophysics, which refined the orbits from circles to ellipses; to Newton, who finally explained the mechanisms that made them orbit; to Einstein and relativity, which accounted for the precession of perihelion of Mercury. Each so-called "paradigm shift" in science allows for better predictions about how the natural world works.

Another misconception held by some deeply religious people is that science is trying to explain away God. While scientists are not necessarily biased against religion—there are practising and respected scientists who are also people of faith—scientists at work see the world through the lens of methodological naturalism, which assumes that supernatural phenomena are not influencing their investigations.

The debate over evolution has been an important flash-point for conflicts over the alleged desire on the part of scientists to write God out of the picture. This has been most well publicized in the United States, with examples ranging from the Scopes trial to the case of Kitzmiller v. Dover Area School District. However, a better understanding of how scientists approach understanding the process of evolution, and how the scientific method works in a more general sense, may help to show how science is not simply setting out to do away with God.

The goal of evolution is not to say "creation stories are wrong" but rather to understand what life came before — how we got from raw chemicals to single-celled organisms to the diversity of life that we see today. Understanding how evolution works helps scientists to predict what fossils can be found in a particular strata of rock — for instance, that one will not find early mammals in a rock strata below one containing a dimetrodon. 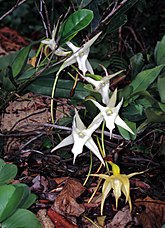 Xanthopan morganii
Darwin made some predictions about animals after seeing the "battle" that was fought between flowers and their pollinators. Flowers want to get pollen attached to whatever creatures feed on their nectar. In fact, this is not just a want — it is how plants are able to reproduce themselves. In this "battle", the flowers that were most successful were those that got the most pollen on their pollinators. Likewise, the animals want (or, rather, need) to get more food (nectar) more easily.

When Darwin saw the Angraecum sesquipedale with a 20–35 cm distance between the opening of the flower and where the nectar was stored, he theorized there must be a moth with a tongue that was that length too, even though he never saw it.

Forty years later, a moth was found that fit the description — Xanthopan morganii.[1] This was not a prediction that was made, based on the text of any holy book, or a recourse to supernatural phenomena. Rather, it was only possible through the systematic observation of the natural world and an understanding of the natural history of the species involved.[2]

There is no inherent atheism in science. Instead there is an understanding that any worldview that can predict anything — or rather everything — has no predictive power at all. Such approaches are not useful tools for examining how the world works and the interactions between different things — be it atoms and molecules, cells and organisms, or stars and galaxies. Only predictions that can be proven wrong are useful and advance our understanding of how the universe works.

There is also point of view, that the main goal of science is satisfaction of curiosity of researchers, and attempts to submit science to any other goals leads to its profanation and degradation. This may lead to the following definition:

Science is way of satisfaction of the personal curiosity of researchers, based on concepts having all the 6 properties below.

These axioms are suggested to be considered as core of the science that remains through all the scientific revolutions; the governmental support of the research based on a concept that does not satisfy at least one of the axioms above should be qualified as fraud.