From RationalWiki
(Redirected from Kepler)
Jump to navigation Jump to search 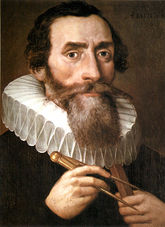 Johannes Kepler (1571-1630) was a German mathematician, astronomer and astrologer; he also did a bit of physics. Kepler used measurements made by Tycho Brahe and formulated Kepler's laws which explain the orbit of planets. Kepler's work was pivotal in establishing heliocentrism as the dominating model of the solar system and helped Isaac Newton develop his theory of gravity. A space telescope was named after Kepler that searched for habitable planets.[2] Kepler also co-invented the popular genre of fiction known today as science fiction, writing one of the first works in the genre.[3] 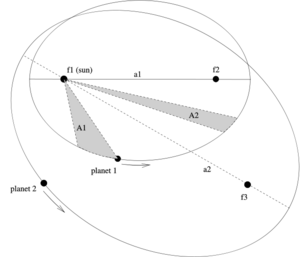 Illustration of Kepler's three laws with two planetary orbits. (1) The orbits are ellipses, with focal points f1 and f2 for the first planet and f1 and f3 for the second planet. The sun is placed in focal point f1. (2) The two shaded sectors A1 and A2 have the same surface area and the time for planet 1 to cover segment A1 is equal to the time to cover segment A2. (3) The total orbit times for planet 1 and planet 2 have a ratio a13/2:a23/2.

Kepler used these laws of planetary motion with ephemerides obtained by Tycho Brahe to construct tables predicting future planetary positions. His tables proved much more accurate than those of Copernicus or Ptolemy, which helped the world take the heliocentric model seriously (within a few decades, most Astronomers in Europe were using Kepler's model, even if they didn't believe it to be physically true, because it was just that much more accurate). One thing leads to the next. Sir Isaac Newton derived Kepler's laws from his own laws of motion and gravitation, gaining further evidence for his theory of gravity (and giving a name to the "force" Kepler proposed the Sun ought to emanate in order to keep planets on orbits).

Kepler also made some minor contribution to pseudoscience, when trying to explain the planetary orbits by circumscribing them with the platonic bodies, and thereby "explaining" the size of respective orbit, claiming that the planets sang in unhearable cosmic harmonies. The contribution was well intended and partially accepted at that age, since they had no means to know better, but his kind of pseudoscience was too elaborate and smart to be reused by later pseudoscientists.

Ironically, it was his adherence to this theory of planetary orbits circumscribed within nested regular solids that led him to discover the true nature of planetary orbits. When his models didn't quite fit the data he was convinced that it was the data that were faulty, and as his own vision was so terrible that he couldn't carry out his own observations he sought out the most accurate measurements of planetary positions available at the time: those of Tycho Brahe. Tycho's measurements were so accurate, though, that Kepler could no longer pretend that Mars orbited the Sun in a perfect circle. He tried various oval shapes to see which ones would fit Tycho's data, and eventually discovered a precise match by using an ellipse with the Sun at one focus. This led directly to his laws of planetary motion.

The "harmony of the worlds" theories became obsolete when new planets were discovered, foremost Uranus. Thus, the number of platonic bodies (exactly 5) were too few to match the number of planet orbits.

Kepler is universally acknowledged as having had one of the most wonderful beards of all the scientists of his day together with a moustache. Galileo Galilei and Charles Darwin may or may not have surpassed him. Kepler's little known fourth law is that badassness is directly proportional to quality of beard, but note that Richard Dawkins does not violate this law.