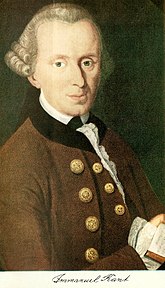 Immanuel Kant (1724–1804) was a key figure in the history of philosophy, instituting a "Copernican Revolution" in Western thought by showing that any philosophical analysis of reality is constrained by the structure of the human mind itself. Before proceeding in any philosophical analysis, therefore, one must first understand the limits and ways of thought that are necessitated by our mind. Any attempt to breach beyond these limits is futile and meaningless.[citation needed] The analysis and revelation of the precise constraints he termed 'transcendent' philosophy - transcendent to the main subject of philosophy, the one the philosopher wishes to explore.

For example, the aptly named Kant distinguished between phenomena, which are things as they appear to us, and noumena, things as they really are. He maintained that certain aspects of the phenomena were necessarily so by virtue of being perceived by humans. For example, he argued that humans necessarily perceive reality as being spatially and temporally ordered. In contrast, he argued that any claim about the noumena was completely without meaning. Most claims about the noumenal world are, by definition, nonsense, because any claim about the noumenal world as such would presuppose an objective perspective. In Kant's view, there is no such thing as a perspective without the limits of a perspective (i.e. there can never be an 'objective' perspective). All we can speak of is how we perceive spacetime; we have no umediated access to spacetime itself, as it is all mediated through the mind.

Kant is considered one of the greatest philosophers, and his work is studied extensively. Unfortunately, he was nearly incomprehensible even in his own time, and the passage of time (and translation) does not improve his clarity. His magnum opus, the Critique of Pure Reason, was so opaque that he was forced to write An Introduction to Any Possible Metaphysics as a kind of shorthand version and introduction to the main text. Novice readers are advised to stay clear of this extraordinarily complicated text as well, and instead read up on more modern accounts of Kant, which manage to convey his meaning without his obtuse style and also have the advantage of incorporating the thinking of later generations and critique of his work.

Critique of Pure Reason and the Critique of Practical Reason are really dense stuff about existence, knowledge and morality. He also wrote several other works, including Religion in the Light of Pure Reason where he argued for a religion that used the semantics of Christianity to appeal to the masses and convention, but had a layer of occult meaning intended for philosophers and those "in the know" which was, essentially, atheistic.

He founded Kantianism, or the categorical imperative, a deontological moral philosophy which can be summed up as "act only in such a way that the principle of your action could be, in-principle, universalized." This theory emphasizes the value of a person's will, rather than their intentions (or the actual consequences of their actions). A form of moral absolutism, it nevertheless (arguably) does not require a divine source. He argued that his view could be deduced by a priori logic. Deontology's basis in duty, rather than utilitarianism's consequences, makes it popular with many modern libertarians, as it means (what they view as) thefts are always wrong, and property rights always right, and Kant's notion of treating men as ends in themselves rather than means to an end deny justification for coercion. Kantian deontology, however, is merely one of many possible deontological accounts — for the record, one libertarians would disapprove of on several counts, since it affirms traditional Christian ideas (i.e. condemning all extramarital sex, etc.).

He was also a real pissant, who was very rarely stable.[1]

On issues of race and gender, Kant was a man of his day. While many modern Kantians see the categorical imperative as clearly forbidding discrimination and bigotry based on race, gender and even sexual orientation, there is no evidence that Kant considered his prejudices as being in any way contrary to his ethics.

By the standards of his time, however, Kant was a liberal in terms of freedom of thought and conscience and constitutional government. He was often at odds with both Church and State, both for his support of limitations on the then absolute power of the monarchy and for his claims that ethics can be based on reason rather than revelation and that the existence of God could not be proven logically. Kant refuted many of the alleged proofs of God's existence which were then given a great deal of weight among Christian apologists. Most of these thoroughly debunked "proofs" are still listed as evidence for Christianity on Conservapedia. Kant settled on a moral argument for God's existence, since he felt it necessary to support his morality. In addition, he staunchly defended the French Revolution, arguing that responsibility could not come before freedom; rather, people couldn't have responsibility without freedom.

One of the most famous arguments from Kant is his "argument from geometry". In the beginning of Critique of Pure Reason, Kant sets out to prove that space and time are not actual things and relations that exist, but more modes of perception. Space and time are tools and frameworks we impose over stimulus to order and interpret it. Basically, space and time are internal and something we use to experience rather than something outside of us in which we are experiencing. Kant puts together many arguments to try to prove this proposal, a set for space and a set for time (though they generally parallel each other).

The first part of the section above is Kant trying to argue that space (and consequently, time), differs from other concepts and representation. For one, Kant says space isn't a "general conception of the relations of things", a typical bit of Kant's overly complex writing, but instead "a pure intuition". Basically, with the concept of a tree, you can replicate the concept as much as you want. You can image multiple trees encompassing different positions in time and space. He then moves on to claim that space works differently. Kant claims that replicating instances of space is impossible. Each instance would either be part of a singularly, larger space, or the replication would be entirely imagine-based (used be replicating an image or symbol of space and not space as a set of relations).

The next part goes into the actual geometry example of the argument. Kant first defines geometry knowledge as à priori (necessary, true in all cases, etc.). Then, Kant proposes that some geometry knowledge isn't analytical (learned via analysis of concepts). Within the quote, Kant uses the example of a triangle and the lengths of its sides. It's obviously true that two sides of a triangle are going to be larger than the third, but you can't learn that from just thinking about lines and triangles and concepts. It does seem to be deduced, or at least derived, logically, but it couldn't have been learned from the empty concepts of "line" or "triangle". Some might say "just measure it, that's how you know it", or "you just learn it from experience", but Kant suggests that you don't need measurement to intuitively know that two sides of a triangle are always going to be greater than the third. He also suggests that it can't be from experience since in his conception all phenomenal experience is contingent and the apodictic nature of the claim doesn't always need to be substantiated via experience. Because it couldn't have come from experience or analysis of concepts, but it still seems to be absolutely non-contingent, Kant deduces that it must be a form of intuition that comes within and we project onto the world.

Some people find this specific argument outdated since it uses Euclidian conceptions of geometry when we know now that's not the only form in which geometry exists. For instance, Einstein's theory of relativity was tested with non-euclidean geometry.

As a form of moral absolutism, Kantianism is often associated with conservative (even reactionary) ideologies. However, Kant also has multiple supporters on the other side of the spectrum. In his work The Open Society and Its Enemies, philosopher of science and critic of religion Karl Popper unabashedly (but not uncriticially) identifies himself with the Kantian tradition while relentlessly attacking Aristotle, Plato, Hegel and Karl Marx.

Ayn Rand also had an odd loathing for Kant whom she described as "the most evil man who ever lived" and also, "Kant was the first hippie in history."[notes 1] Her followers believe this type of writing passes for philosophy. Rand's critiques are ignored by academic philosophers, largely based on her own insignificance as a philosopher as well as her inability to understand Kant.[2]